Layered description of place and space 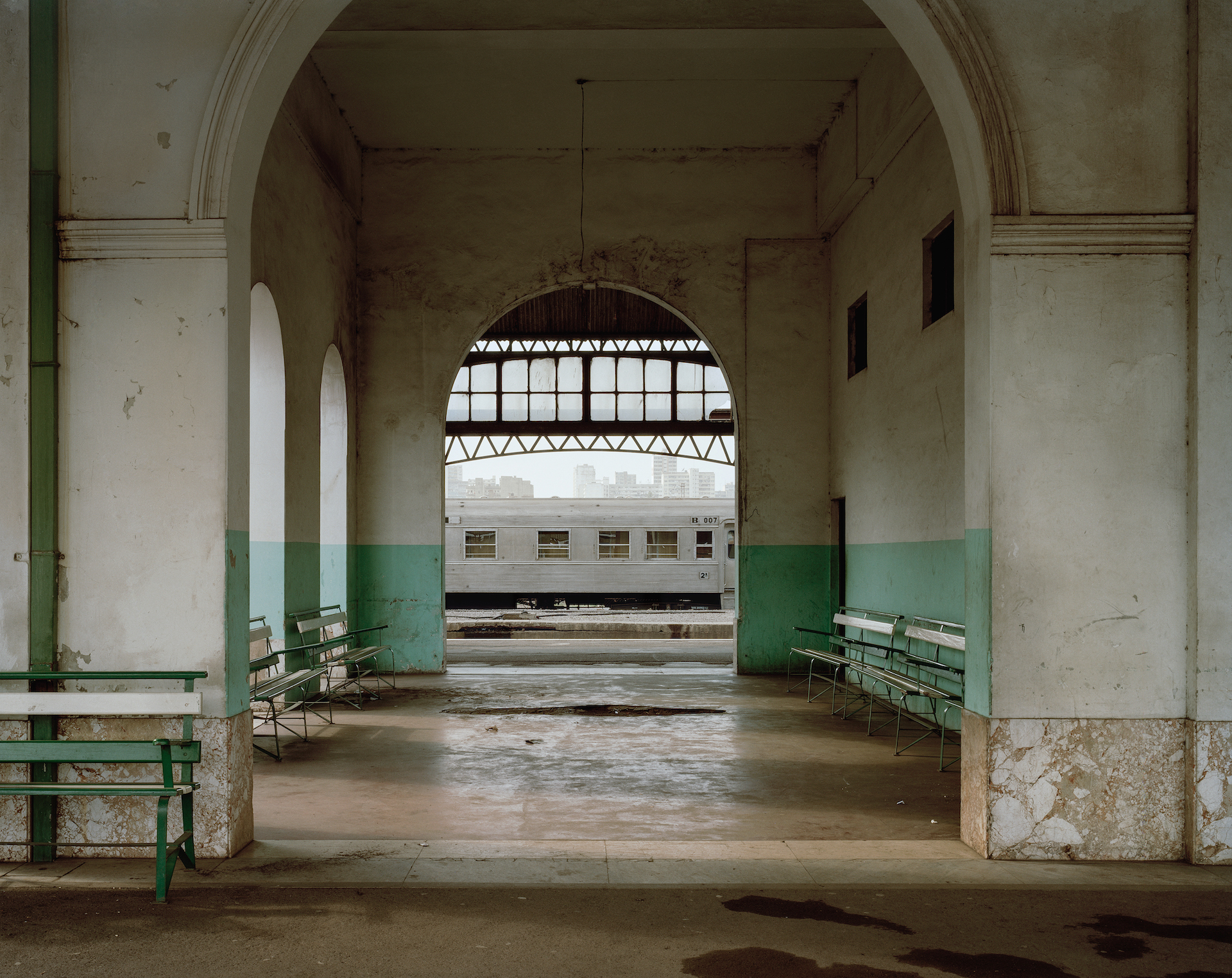 His photographs appear to be architectural, but John Riddy doesn’t think of himself as an architectural photographer. Buildings might be the subject of his pictures, but they are also sculptural settings for an analytical, and at the same time, personal description of the more abstract qualities of place and space. Riddy explains: “When it works, the photographs bring different elements together to make something more than just one place or time. I hope my photographs resonate with other images and shared experience.”
‍

As a child, John Riddy was already mesmerized by photography. After a long journey through America as an adolescent, he decided to fulfil his long-cherished wish to become an artist. “I went to art college where I made paintings and sculptures, but once I left, I found it difficult to work from just an empty canvas. I was much happier working with everyday stuff; using found objects to make sculptures and then later taking more and more photographs. But I think my roots are clear. There is a silence and stillness that I try for in my work that comes in part from painting and sculpture.”

His images have a meditative quality that you can see in his thought-out compositions. Balance and structure are essential in the analytical work of John Riddy. The decisive moment is not the starting point in his photography, instead, the decisions are made over time. You could categorize Riddy's work as urban landscape or architecture, but those terms don’t describe the breadth of his work. “I try to frame a tension between describing space and place and the illusion that the print is a window.”
‍

His shots of a bridge in London or a building in Rome have multiple layers on which they can be interpreted. “I hope my photographs don’t just document one place and time. The print should have its own formal life and be physically present. Resolving the formal relationships – colour, tone, the composition; those elements have to be settled and working, and then you get a tension between them.”
‍

I try to frame a tension between describing space and place and the illusion that the print is a window.

Subtle palette of colour and tone

On the wall in the picture 'London (Rail Sidings Road), 2017' you see details that you wouldn't notice in real life, but when seen in the giant museum print, which shows as a super realistic tableau, they stick on your eye. Riddy: “The physicality of the works in the exhibition makes the viewer see their surroundings differently but also helps to evoke other feelings and associations.”
A subtle palette of colour and tone is intrinsic to this process of recognition and associations from personal experience. A characteristic of Riddy's photographs is the rich palette of colours or shades of grey, combined with the intense detail of the print. “If you present the viewer with an aggressive tonal scale and very chemical saturated colours, there can be less opportunity for them to make associations. I hope that the print has a physicality and a subtlety that’s more open-ended, less noisy.” Riddy wants the viewer to have an experience of recognition. “I think photographs with a quieter tone of voice are more likely to resonate with the image bank we all carry inside us.” For Riddy, the recognition that the viewer has is not just a physical reality, but somewhat of an energized space. He refers to the painter Brice Marden in whose works the formal elements relate to evoke an atmosphere and a meditative space. “That way of painting interests me, especially in his early works where modulated tones and colours interact to make an almost architectural spatial illusion and atmosphere.”
‍

With this essentially formal and modernist approach to photography, John Riddy distinguishes himself from many of his contemporaries. Many photographers refer to their photography as storytelling, but that's a term that doesn't apply to Riddy. He is closer to photographers from the New Topographics, especially Stephen Shore who referred to his photographs as descriptions. Riddy: "I describe the things I photograph. I show a process of analysis. In my photographs, you can see what decisions I made to make them."

When Riddy started photographing, he was not aware of the Düsseldorf School. “I did look at a lot of architectural photography, to people like Werner Mantz and Ezra Stoller. Later, when I saw the work of the Bechers and artists like Struth and Gursky, I could see the similarities in approach. I hope I have my own voice, but I can see it has parallels there and with artists like Stephen Shore and the New Topographics. I arrived at a similar place via a different route.”

In Palermo, the colourful capital of Sicily, Riddy made an extensive series in black and white. In the black-and-white photo 'Via della Loggia, 2012' you can see an insignificant alley with parked cars and old graffiti-covered walls of houses. The photo has a rich palette of grey tones and a multitude of detail. “The series started in part as a response to a photograph by Gustave Le Gray – ‘Palazzo Carini, Palermo’ – taken in 1860 after Garibaldi defeated the Bourbons to take control of Sicily. I found it compelling.  It’s a densely textured photograph with a very modern feel to the composition. I like the tone of voice.

It’s descriptive but unspectacular. I started working in Palermo in colour, but the strong blue skies and the yellows and ochres of the buildings were too dominant, and the immediate impact got in the way of other qualities. Working in black and white with a long tonal scale, the textures, surfaces and light came to the fore, and lots of the photographs have a nice echo of the Le Gray.”
‍

The photo 'London (Heygate, 2008)' shows a modernist housing estate, taken in the early evening with twilight and street lighting. It is a seemingly every day photograph of an insignificant part of the city. “This estate in the Elephant and Castle in South East London was controversially demolished, and many of the residents were rehoused in other areas. The estate was rebuilt with a reduction in social housing, so the photograph documents an important piece of local history.”

Framing and re-presenting establish relationships that transform the everyday

Riddy shot the photo in a frontal way, without perspectival lines, so the viewer has no escape point. You have to look straight at the housing. Why did he use this approach? “I don’t really want to be omnipresent as the photographer. I want the scene to exist as a given that is re-presented. That’s partly why I tried to avoid deep perspectives in that series; to present the image as a kind of stage or relief that has been revealed when the curtain is opened. I tried to leave out evidence of my work or movements to take the picture. The objective is to end up with something complete within the frame; without the need to question what lies outside it, and although the housing might look commonplace at first sight the image works because it reveals the everyday as something interesting and in this case of social significance too. I think it relates to the use of everyday objects in sculpture and collage. Framing and re-presenting establish relationships that transform the everyday. Objects take on new meanings and values.” ‍

For Riddy, a careful technique is critical because he wants to describe reality as physically as possible. That's why he now uses an adjustable Linhof camera with a digital PhaseOne back. An excellent example of his use of the possibilities of the technical camera is the series of photographs' New York (Black Star), 2016', for which he has merged nine files, always adjusting the back horizontally and vertically. “You have to practice the technique because you need to work quickly to keep up with changes in the sky or the colour of the light. But if you look at the details in those prints, they are really intense, and it’s the technical and physical quality that underpins the impact. That’s why I do all my own printing on the Epson. I want to be in control of the formal relationships across the print. So, once I have a first proof, I might have it on the studio wall for weeks before I start to change colours and tones. In the ‘Black Star’ pictures, I spent a long time making sure everything worked together across the five prints. I really like the possibility for printing muddy and unsaturated colours very precisely using Photoshop with the digital printer.”

John Riddy (1959) studied Fine Art at Chelsea School of Art and began working with Frith Street Gallery (London) in 1993. His work is included in many collections such as The Tate, The Victoria and Albert Museum, The Stedelijk Museum Amsterdam, The Art Institute of Chicago and De Pont Museum.