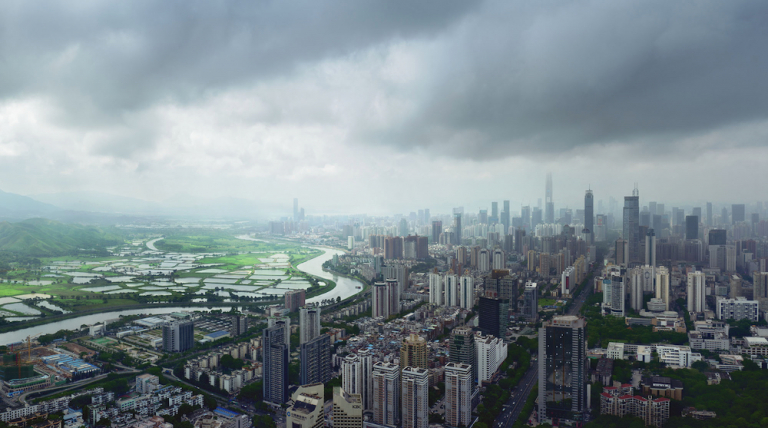 After months of closed museums we are happy to finally announce the opening of NOWHERE – Imagining The Global City by photographer Frank van der Salm, a Paradox production in collaboration with the Nederlands Fotomuseum.

The central theme of Frank van der Salm’s work is urban development as an expression of our time. Over the last 25 years, Van der Salm has travelled the world, focusing on urban landscape in its broadest sense. Aestheticism plays a major role in his work. It is the means by which he criticizes the urban world we now inhabit. NOWHERE, bringing together Frank van der Salm’s body of work from the past 25 years, is composed of two radically different parts. The Artificial Intelligence-driven installation, featuring all of his 241 images, is overwhelming and dynamic. It visualises the links between the works, based on their underlying meanings. The images themselves are immaterial. Behind the video wall lies the traditional, quiet museum world: the sphere of the ‘authentic’ works, each with it’s specific size and appearance. They are displayed in isolation from each other. Profusion is replaced by austerity and concentration, with no more than fourteen physical photographs and video works on show at any time. Here, Frank van der Salm’s aesthetic acts as a vehicle for his critical attitude towards the built environment.

Artificial Intelligence as (assistent) curator?
Identifying and defining critical meaning within an oeuvre has traditionally been the job of the curator. In this exhibition, curator Bas Vroege shares that role with another player of our time: artificial intelligence (AI). Computers use AI to identify patterns in raw data and take autonomous decisions based on them. NOWHEREadresses the question what new patterns can the application of artificial intelligence reveal within a photographic oeuvre created over a period of 25 years. Frank van der Salm tagged each of the 241 images in his oeuvre using a total of 41 terms, ranging from ‘24/7’ to ‘alienation’. He then gave them a score between 0 and 1. After this, AI researcher Gjorgji Strezoski (UvA) fed the images and accompanying data into the University of Amsterdam’s supercomputer. Working in collaboration with data visualisers RNDR and composer Henry Vega, we present the results of this experiment on a video wall of urban dimensions. The installation allows the viewer to tour Frank van der Salm’s motifs within an imaginary data space.

The exhibition will be on show at the Nederlands Fotomuseum in Rotterdam from 2 July – 3 October 2021.You can book your ticket on the website of the museum.

Thank you! Your submission has been received!
Oops! Something went wrong while submitting the form.
Nederlands Fotomuseum
Rotterdam
Netherlands
July 2, 2021
|
October 3, 2021
Website
Back to Events