A mountain becomes a form, and a valley becomes a coloured canvas. 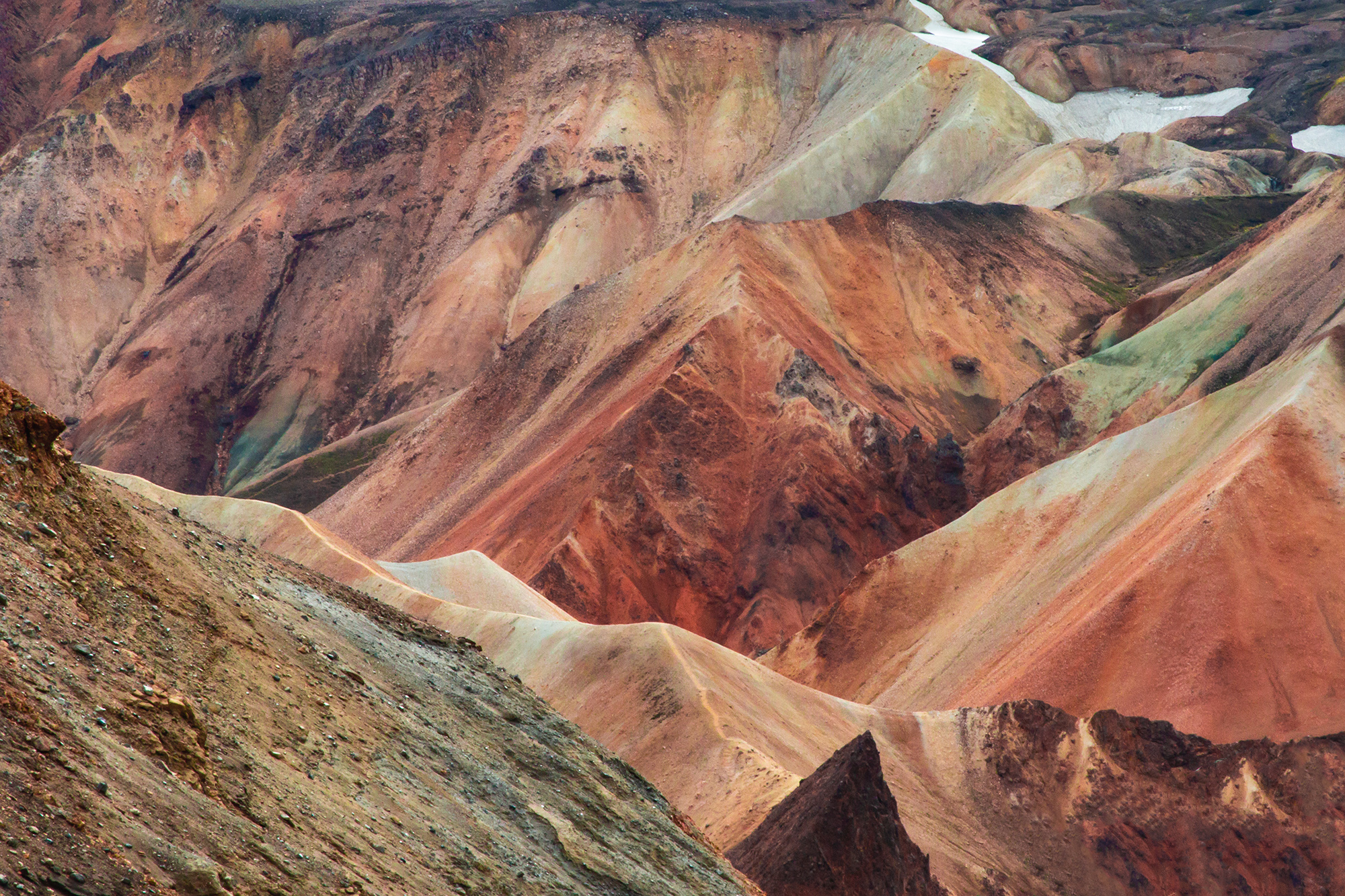 Red and brown mountains, greenish lakes and icy white snow-caps; the images of Italian photographer Sofia Podestá show wide and arid landscapes in remote areas of the world, from the very south of Chile to the very north of Iceland. Does she want to show us the landscapes itself, or is there another dimension behind the vast and uninhabited spaces? Walking along the great Prospect shows both nature and our perception of nature.

Whereas most photo projects emerge from a practical experience, Sofia Podestá started her curiosity from a theoretical departure. While writing her thesis about famous Italian landscape photographers, she had the idea to take a more conceptual standpoint, investigating our perception. "Everything began from my thesis, in which I studied how some of the most well-known Italian landscape photographers looked at the natural spaces, even if they usually didn't want to deal with them. They used to look at the natural landscape, and nature itself, in a more conceptual way, not only showing the beauty of the majestic spaces, and this has always been my purpose too. Luigi Ghirri used to look at nature in the way only humans can; applying the perspective and the framing to demonstrate a process of abstraction or an artificial measuring of things. Once you take a photo you are changing the nature of the shapes you are watching at: they are now part of a code, signs because the object became 2D and no more 3D. All of that was my starting point."

The goal of Podestá’s work is to say that what we see in images is not the reality. You might say that there is a trace of reality in every picture, but that does not make a photograph a depiction of the objective reality. If you would read the picture in a strict way, a mountain becomes a form, and a valley becomes a coloured canvas. "I don't think humans are completely alienated from nature; they are just different. Humans act in ways that nature doesn't comprehend because it is already following its own rules. When humans look at nature, they put the natural elements in a code, like a translation. During this coding process, we miss something, that in the case of my work is the ability to distinguish what you are looking at."
‍

Podestá refers to the Italian novelist Italo Calvino, who showed the danger of over-simplification. "I quoted Calvino because while I was trying to put into words and images Walking along the great Prospect, I was reading the Italian writer, and finally, I found exactly the final words I was missing. Calvino wanted to simplify the world to get to the essence of things and understand them better. However, the simplification gets out of hand, and a domino effect is created. It can reach a total annihilation of the world in which he recognized nothing anymore."

Podestá is not the type of photographer who seeks to make political judgments and implications. Her work is better understood within the cultural dialogue of perception and reflection; and of her personal experience. "I don't usually make judgements with my photographs, they are instead moments of suspension and reflection, but I always try not to make open judgements or convey messages in a straightforward way. It's more of a story and a discovery, trying to measure a given situation, at a given moment, from a given point of view, which is my own. My works usually have a cultural connotation more than a political one. Of course, I care about climate change. Some of my pictures show landscapes or spaces that are victims of it because we all live in a climate emergency, but it isn't my topic. My goals usually are more to tell a story, a feeling, a memory of the past, or places I've seen and made me curious."
‍

The photographers who inspired Podestá the most are Luigi Ghirri, Walker Evans, Andreas Gursky, and the American photographers like the group who took part in the exhibition New Topography. "Other than photographers, I'm inspired by literature, cinema, and by my university years where I attended the faculty of art history. There I had the opportunity to study many different disciplines altogether, literature, history, Latin literature, anthropology and architecture. All these topics gave me tools to look at things with different layers of meaning."
‍

Sofia Podestá recently upgraded to the full-frame 6D Mark II, with a 24-105mm lens. "This lens covers different distances and often it's quite a problem to change lenses during the rainy, foggy and snowy weather that I like the most. I used to shoot a lot on analogue years ago, but at the moment I left it behind in favour of the digital. Digital allows me more attempts and is faster and safer, especially if you need to send the work quickly. But sometimes I still shoot on film, because it is more delicate and an intimate: the colours, the grain, the process, and the time spent waiting for the results. These feelings will never compare to digital."

Sofia Podestá (1991) was born and is based in Rome, Italy. She studied Art History at the University of Rome. "Art history is a big part of my life. I studied the history of photography, and I am a self-taught photographer for the practical part. My formal education helped me for my vision of photography. I learnt that the "genius" who creates from nothing does not exist. If you don't know your predecessors, you can't go ahead and create something innovative. The University taught me how to do serious scientific research, to verify the information, and to be always curious and open-minded."

Light as A Tool of Contemporary Storytellers

Ancient relationship between Gold and Religion