The book is a culmination of a series of many years documenting these buildings for their aesthetic & cultural value. 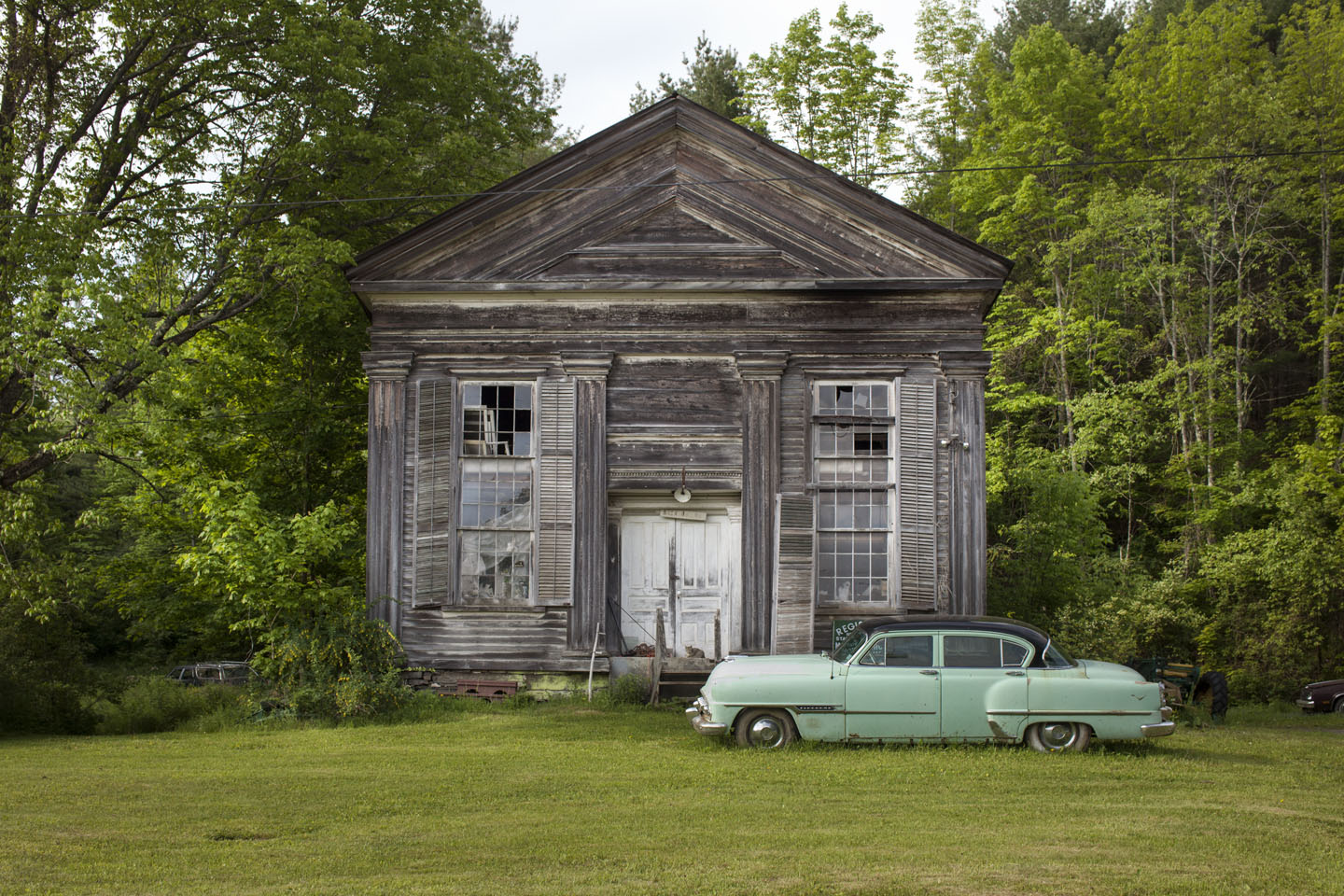 Travel down any backroad in America, especially in the older states along the eastern seaboard, and, if you look closely, you will see buildings of the type photographed by Steve Gross and Susan Daley -- rough hewn roadside relics, the patinated survivors of an earlier commercial era. Over the past twenty years, Gross and Daley have directed their keen eyes toward this type of American vernacular architecture, one that tends to go unnoticed and is rarely studied in depth. Even with bold signage, these rustic, unpeopled structures often blend into their environments, sometimes literally becoming engulfed by the surrounding vegetation as the years pass.

Gross and Daley, observers of the byways, carefully isolate each building in their full-color and black-and-white architectural portraits, acutely attentive to subtle stylistic differences and social significance in communal meeting places of labor, commerce, shopping, and recreation. There are churches and grange halls, schools and grocery stores, gas stations and fast-food restaurants, agricultural storage bins and outbuildings, cobblers’ shops and tinkers’ sheds, even a coffin warehouse and a what-not shop. The inauspicious buildings that Gross and Daley document are the well-used proletarian architecture of the Second Industrial Revolution, a period of unbridled wealth and global dominance that utterly transformed the United States in the years between the Civil War and the Great Depression, roughly 1870 to 1930.

Galvanized by automotive transport, telephone communications, electric lights, and the advent of fossil fuels, the far-flung laboring villages of nineteenth-century settlers were suddenly linked by shared roads, communications, and services. During the first age of the automobile, the American countryside was dotted with purpose-built way stations for people in a hurry, bringing goods to market, getting gas, grabbing a bite to eat. These modest workaday structures were built to accommodate a robust traffic in products and services and were assumed to be temporary, even ephemeral; they were constructed without architects, expanded or contracted to suit their immediate purposes, and preserved not through careful restoration but through ongoing use and routine maintenance. Now, miraculously, they have survived the insistent destructiveness of the modernist ideology of newness, a tendency toward corporatized sameness in both architectural style and core purpose that characterizes chain stores.

Gross and Daley’s visual survey, which covers buildings from Vermont to Louisiana, constitutes an invaluable record of this disappearing brand of vernacular American architecture. By definition, the term “vernacular” refers to the culture of the people, to that which is ordinary and popular. Vernacular architecture is commonplace, unschooled, or colloquial, as opposed to the polished high style of the professional architect. With greater attention to tradition and continuity than to formal experimentation, vernacular buildings often display unique creative and expressive forms, showing distinctive flourishes depending on regional tastes. Such surprising and generally unnecessary embellishments of design appear often in Gross and Daley’s photographs, demonstrating the recurrent creativity in sites of labor: the elaborate Carpenter Gothic porch of the Riverside House in Phoenicia, New York (pg. 119), the bizarre pointed bargeboards of the so-called Icicle House in Oak Hill, New York (pg. 101), or the swooping roofline of the Winged Roof Mystery Shed in Florence County, South Carolina (pg. 76). Alongside such local geographic or typological peculiarities, one can additionally map the impact of ethnic traditions, shifting economies, and changing social attitudes.
‍

While a casual review of these aging structures might suggest that they are engaged in a gradual, almost natural decline, exactly the opposite seems to be true. Not only are these buildings sturdy survivors, but their hardened frames have ensured a succession of new purposes or reuses. These are imperishable American ruins, not razed and replaced, but enduring through recycling and sustainability. In fact, this Darwinian imperative may very well be the chief characteristic of local vernacular buildings: when they become obsolete, they are either abandoned and destroyed, or simply assigned a new function. These changing businesses are sometimes indicated by signage, sometimes not. Reddick’s store in Benevolence, Georgia, now houses a U.S. Post Office (pg. 62) and the Shew Hollow Church in Gilboa, New York (pg. 23), has been converted into a car repair shop. In Hale County, Alabama, Gross and Daley caught sight of a durable farm shed (pg. 29), and followed in the footsteps of fellow photographer William Christenberry, who famously documented a single roadside building in that area annually over the course of thirty-four years, as it was converted from a nondescript store to a juke joint called “The Shack“ to a thriving local nightspot known as “The Underground Club.” (It has since been torn down.)
‍

Susan Daley and Steve Gross responded with an elegant eye to a genre that is primitive, pure, and unpretentious.
Architecture as sculpture as architecture.  Duane Michals, artist

Most persistent, though scarcely visible in these images, is the road itself, a commercial thoroughfare that binds these structures together and gives them their reason for being. These buildings muscle right up next to the tarmac with hardly a space to pull over, making them easily accessible for delivery and exchange. The well-worn tracks are old auto routes, paved in crumbling blacktop or macadam, that trace even earlier wagon trails and plank road turnpikes laid down in the nineteenth century. Geographer John Brinckerhoff Jackson called this “the vernacular road system.” These side roads are not straight, like highways; they curve and rise with the landscape, meander through villages rather than going around them, fostering stops for commerce and comfort along the way. While railroads and shipping and later airplanes provided industrial transport, it was this spidery network of secondary roads, reaching into every cove and hollow, that drove the local enterprises and entertainments of the twentieth century, now bypassed and remote as commerce becomes standardized, with the same stores selling the same goods coast to coast, and with customers doing more and more purchasing online.

Ruins often provide an uncanny meditation on time and the ephemerality of life.  But the venerable structures that Gross and Daley so carefully catalogue are living records of a more recent past, working-class remnants of a once-thriving industrial and agrarian culture. Their photographic taxonomy provides a counternarrative to dominant architectural and social histories; this is testimony from below, a partially buried narrative comprised of buildings and cultural practices that mark class difference in society. These sites are, as Susan Daley says, bearers of “half-forgotten truths and obscure social rituals and beliefs, as well as lost building practices and ways of doing things.”

This thoughtful reconsideration of roadside architecture—defying the notion of throwaway culture to consider an expressive and politically-resonant document of everyday life—helps to reposition and reconceptualize the meaning of such artifacts. Rather than issue a lament for the disappearing past or a clarion call for architectural preservation, Gross and Daley draw attention to the beauty of the seemingly mundane or overlooked. Their work celebrates not only the buildings themselves, but also the quotidian labors and epiphanies those buildings once housed and sheltered.

More information about the book

We are project Wild