Empty streets by themselves automatically become an inviting stage where surrealistic stories start and end. 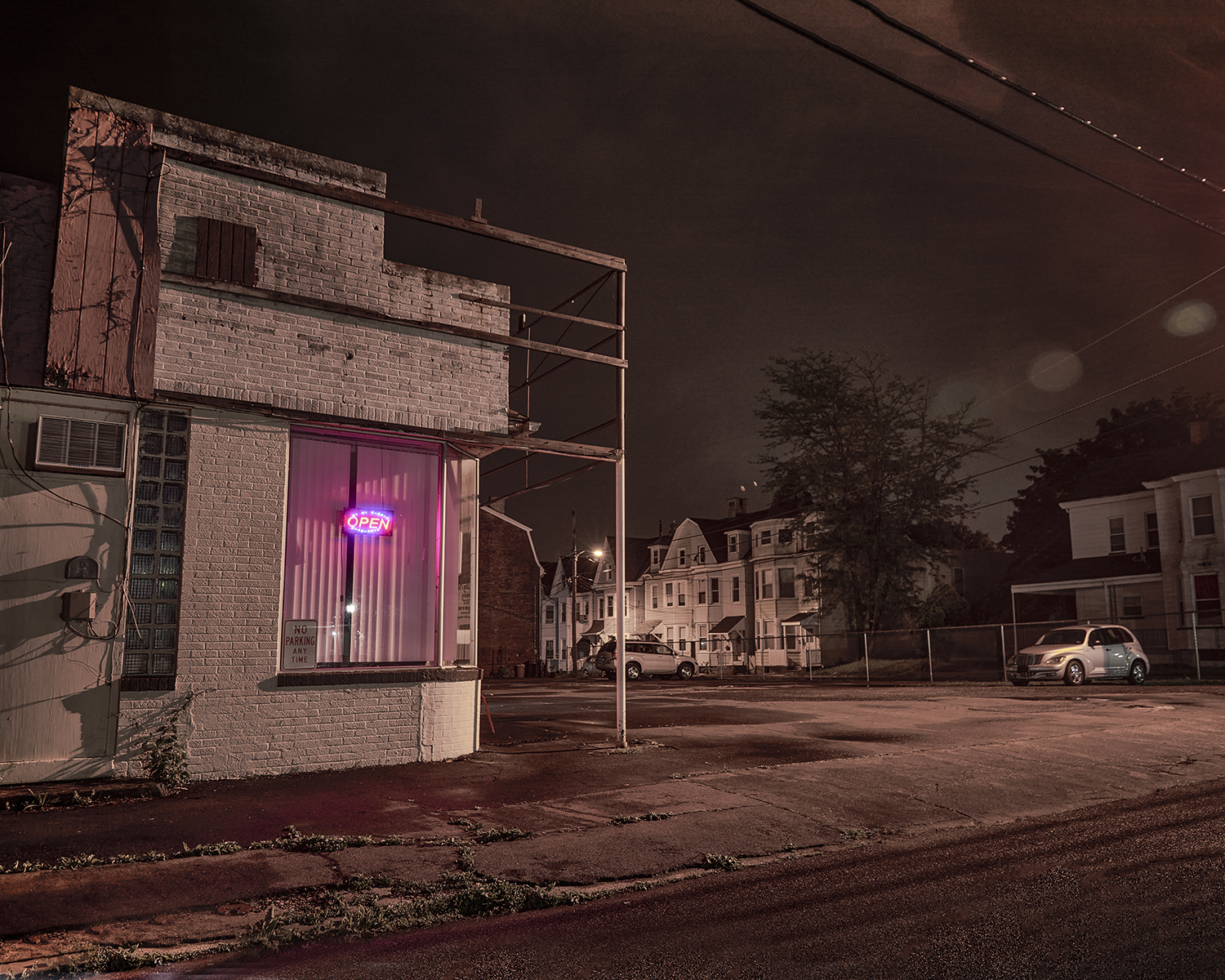 In the 30s of last century, the Hungarian-French photographer Brassaï captured Paris by Night, a technically challenging undertaking in those years. American photographer Peter Ydeen has been influenced by his great predecessor in his photo series Easton Nights for which he sometimes photographed eerie but often just puzzling night scenes of desolated streets, houses and shops in his hometown Easton. Is this how the world looks like, after a devastating pandemic, one might ask? Or can we detect a celebration of the dark but meditative beauty in our world?

Whereas some projects emerge from a deep pondering about how to show the photographer’s ideas, Easton Nights seemingly developed itself naturally. Peter Ydeen says: “There was a small show of night photography in California which I wanted to submit to, back in late 2015, and those were my first-night photographs. I became fascinated immediately with what was showing up in the camera, and I found the photographs really resonated with me, and seemed to convey something intangible that I felt in tune with.”

The story that Easton Nights tells evolves in an organic way out of the camera itself. Empty streets by themselves automatically become an inviting stage where surrealistic stories start and end. “The street scenes mix with the unusual colours created by the combinations of man-made light, which is very different to colour created in daylight, and gives photographs of a place that is both real and unreal at the same time. It is a natural surrealism I often equate to a film I have always liked; Pan’s Labyrinth.”

Being a part of the Lehigh Valley, the city of Easton seems to be an ideal place for night photography because of its industrial history. Ydeen: “There is a population of almost one million people, and a history going back to the mid 18th century, which is old by American standards, but it never jelled into a single population centre, like Pittsburgh, Philadelphia or New York City. Although it was the epicentre of the Delaware canal during the Canal Era and has been home to giants like Bethlehem Steel, Mack Trucks and many other industries, it still contains its energy in its parts, almost like a museum of small-town America.”

For Peter Ydeen, the night with its play of light and shadow came as an unexpected boost of photographic depth. “This project parted ways very quickly from my earlier work, as I was doing daytime urban landscape which tended to emphasize flat compositions, and treated the image as a two-dimensional object. The night photography almost immediately delved into the third dimension, and seemed to invite the viewer inside.” If Peter had to pick a theme, he would say: “This is America, and it is magical.” According to him, his Easton Nights is a romantic vision of our world with unique energy and otherworldly quality, that is revealed only at night, during which objects are isolated and emphasized. The night discloses the mystical character of the city. Even though he sees his photography as a description of the world, Ydeen does not put his photographs on the ‘window side’ of the Szarkowski spectrum. “With rhythm and geometry, vignettes and arrangements, I describe the mimesis of our world. I have kept photographing during the lockdown, and the emptiness of the Covid world actually just brings attention to something that was already there, and evident at night. I feel like the message is more of a mirror, and I always hope others see a sort of magnificence of what we have made and the places we live.”

With rhythm and geometry, vignettes and arrangements, I describe the mimesis of our world.

Peter Ydeen comes from a painting background, and he always knew of Eggleston's work and the New Topographics, but he never deliberately tried to emulate them. Eggleston as the aesthetician of the ugly is not his cup of tea. “Although Eggleston is often associated with the celebration of beauty in the mundane, I always found his work more the celebration of the ugly. It is a wonderful aesthetic, but one I feel is far from myself.”

Though the subject matter of The New Topographic, defined as the Romantic antithesis, overlaps the photography of Peter Ydeen, they often stand at opposite ends of the spectrum. “The main photographer I looked at, and who I feel my work derives from, is George Tice. The title of his book Urban Romantic says it all. His night-work is so poetic, and I feel he was a stepping stone for my work. I would also mention Robert Adams, though one of the New Topographic photographers, did a series Summer Nights, which is very romantic.” The two influences Ydeen mentions outside of photography include painter Charles Burchfield and the 19th Century romantic writers, ETA Hoffman and George MacDonald. But one of the finest influences comes from the interbellum period in France. “The series title, Easton Nights, was adapted from our friend Brassaï, and his book Paris by Night.”
‍

A cup half full

As a spectator looking at foggy night scenes with old houses, rainy streets, broken cars, a parked yacht on the grass and old barns along the road and a closed presbyterian church, you might wonder if this an apocalyptic vision of a post-trump era. But Ydeen denies any political connotation to his work. “My work contains no politics, and though I have strong political feelings, it is not found in my work. It is certainly not a warning, but more of the opposite. It is more of a celebration of the world surrounding us. Something we could all benefit in opening our eyes to. It is a cup half full look at our society.”
‍

Peter Ydeen photographs with digital cameras, mostly with a Nikon D850 and a 24-120mm lens. “I always use a tripod. I occasionally put on a clear filter to add diffraction. I aim for f11 and ISO 200 and then adjust the speed. I process first with Capture One, then Photoshop RAW, finally in TIFF files in Photoshop. Printing is a whole other matter, due to the wide range of out of Gamut Colour given at night and the extreme dynamic range, which cannot be produced on paper.”

Peter Ydeen (1957) studied painting and sculpture at Virginia Tech and then received his MFA atBrooklyn College. He did technical illustration, staging, drafting and modelmaking for architecture and film. In his 30s he opened with his wife a gallery in NYC selling African and Chinese antique art. After 2015 photography became his sole means of making art. He is scheduled to have his 8th exhibit opening in April at the Noyes Museum’s Art Garage in Atlantic City.

The hidden world of production

Is participatory photography the promise for social change?

About the role of collaboration in documentary photography
Photo Culture
•