About the violence of the waters 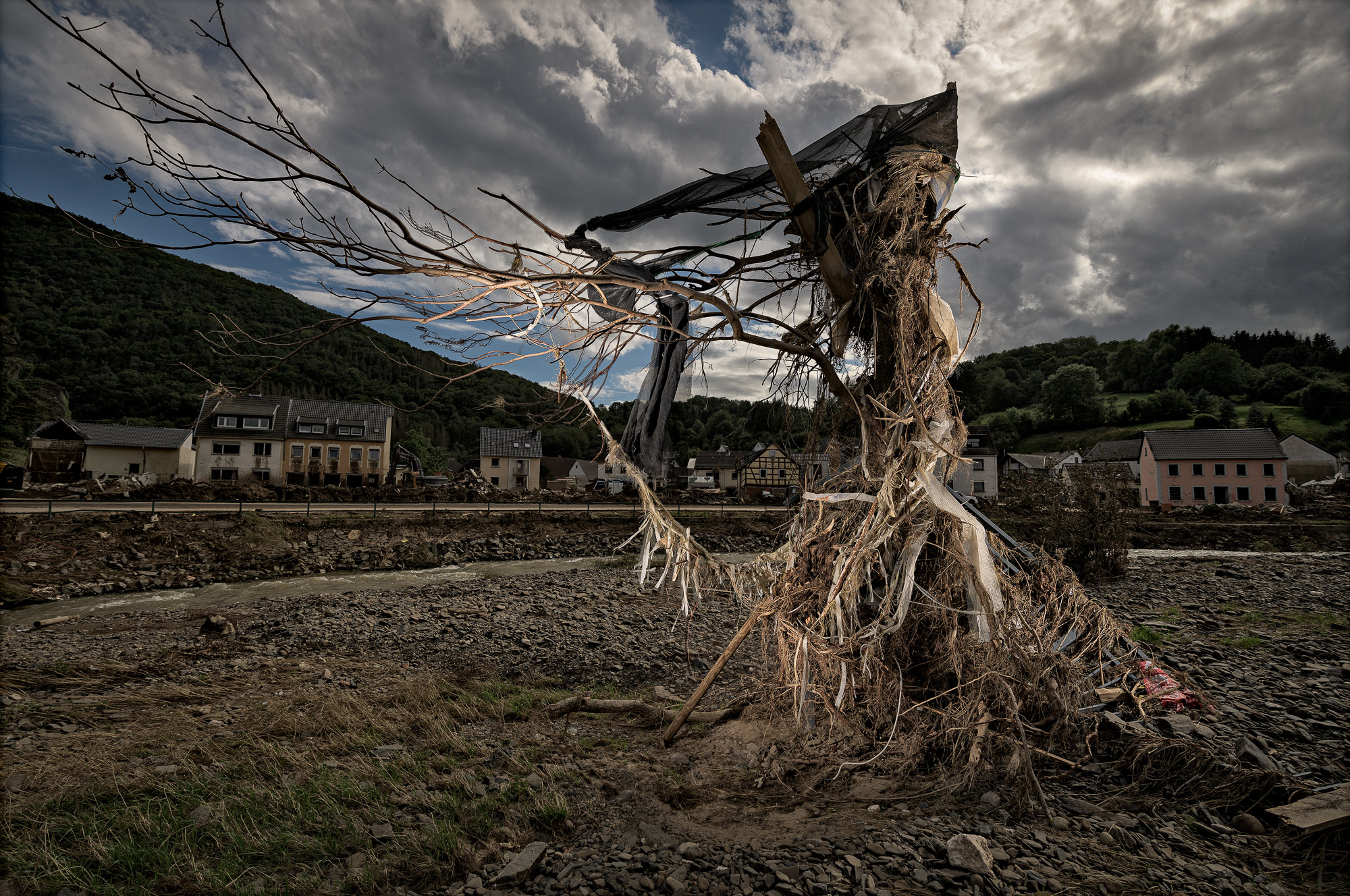 © Eckart Bartnik | FLOOD - About the violence of the waters

It had been raining for days. Four days before the water level rose further, the European Flood Awareness System (EFAS) sent out the first warnings. These became more specific and precise by the hour. Neither the responsible agencies nor the media responded to the warnings. The flood claimed 180 lives and left behind enormous suffering and immense damage to infrastructure.

Countless times I drove through the Ahr valley to visit my parents-in-law. The Eifel became my second home. Now you pass through almost untouched areas until you reach the places where the flood had reached. The transition from untouched landscape to chaos is abrupt and exceeds any usual dimension: Houses washed away, black holes from windows and doors foreshadow the force with which the flood advanced.

Brown areas with distinct lines mark the highest water level. Residents haul baskets of silt-covered inventory out of homes. "The Limits to Growth" by the Club of Rome predicted a critical progression of the world as early as 1972. In August 2021, the sixth assessment report of the United Nations Intergovernmental Panel on Climate Change (IPCC) was published: the influence of humans on the climate system is clear. The more we disrupt the climate, the more severe and irreversible consequences we risk. We have been warned.

About
The photographer and natural scientist Eckart Bartnik, born in Bonn in 1957, lives in Wiesbaden and works in basic research. For five decades, analogue and digital photography has been his means of artistic expression. Numerous workshops with renowned photographers such as Wolfgang Zurborn, Markus Schaden, Thekla Ehling, Olaf Otto Becker, Ann Mandelbaum, Derek Ridgers and Göran Gnaudschun have shaped his visual language. Since the 1980s, his work has been shown internationally in group and solo exhibitions and published in daily newspapers such as the FAZ, magazines and trade journals (e.g., Stern, Wings) as well as online (including Spiegel-Online, The Guardian). He is moved by the question: What insights do abstractions of views of nature give him? How does the conflicting human-nature relationship influence our environment? As a natural scientist, he captures his research subjects with a rational mind - with a camera in his hand, he experiences the freedom to capture his environment subjectively and emotionally. The search for a deeper understanding of the world drives him.

The hidden world of production

Is participatory photography the promise for social change?

About the role of collaboration in documentary photography
Photo Culture
•