This highly relevant project offers a contemplative look at the largest ongoing conflict in Europe. 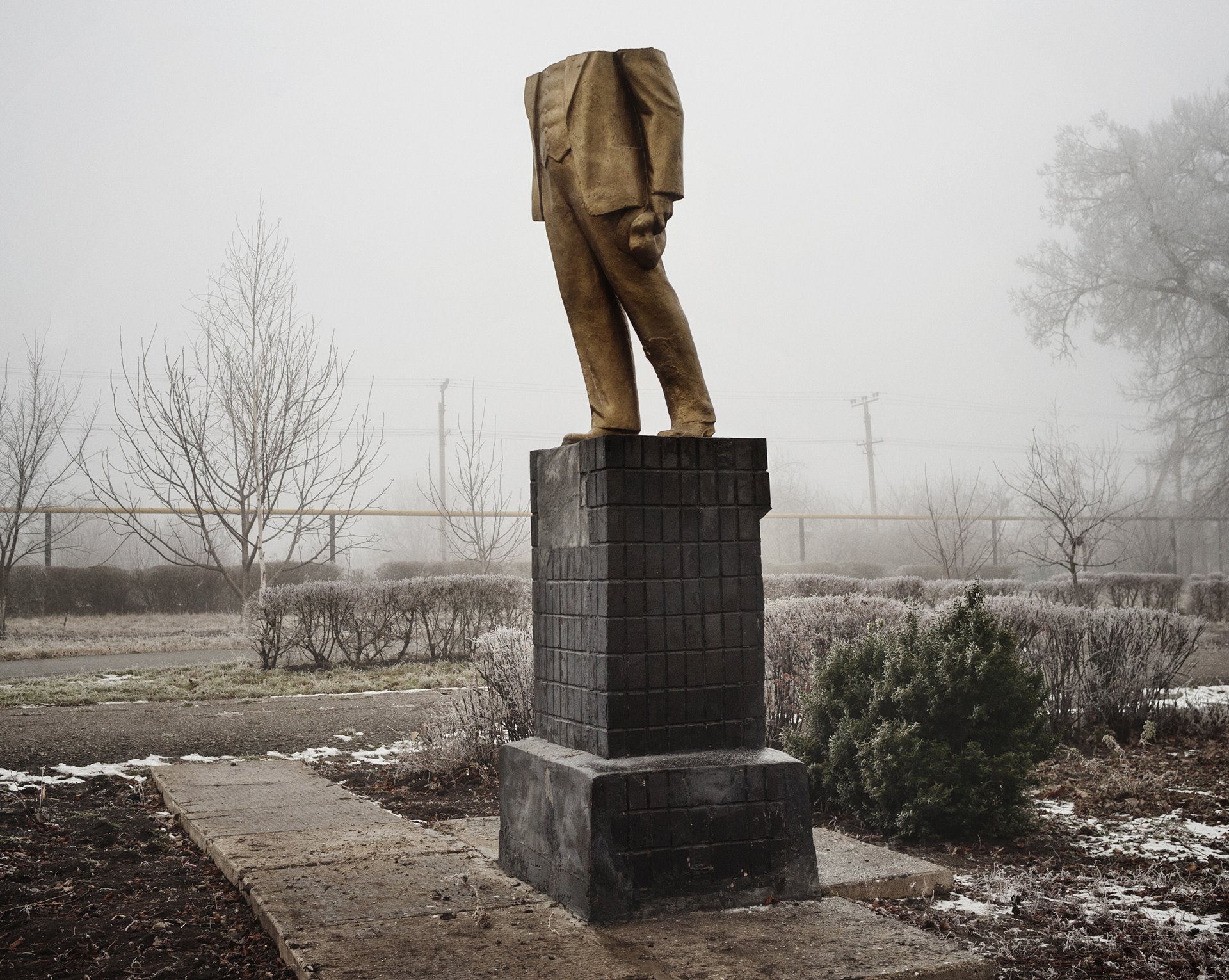 © Guillaume Herbaut | A decapitated statue of Lenin stands in Cheminots Park, Kotovsk, Ukraine, on 19 December 2013. The statue was destroyed by ultra-nationalists on the night of 8–9 December.

Amidst a sea of fast paced news events this highly relevant project offers a contemplative look at the largest ongoing conflict in Europe. The photographer has created something that is neither violent or graphic, giving viewers space for a moment of reflection. The consistency of suspended images and the variety of elements provides us with a nuanced approach that depicts the multilayered impacts of long-term conflict on daily life and the psyches of those who are living through it. (The Jury of the World Press Photo comment)

In November 2013, tens of thousands of people took to the streets of Kyiv in the Ukraine to protest against the decision of pro-Russian president Viktor Yanukovych to pull out of signing an association agreement with the European Union. Demonstrations, focused on the Maidan (also known in English as Independence Square) in the capital, spread throughout the country, and were violently suppressed. President Yanukovych fled to Russia in February 2014 as a consequence of the demonstrations, and a pro-EU government took power after new elections.

This exacerbated tensions between the east and west of the country. In March 2014, Kremlin-backed forces occupied the Crimean peninsula. Russian is widely spoken in parts of the east of the country and in the Crimean Peninsula; with roughly 30% of Ukrainians using it as their native language, according to a Ukraine government census. The territory voted to join Russia, in a referendum that Ukraine declared unconstitutional. A month later, separatists in the eastern regions of Donetsk and Luhansk seized government buildings and established self-proclaimed people’s republics, a status not recognized by most of the international community. Clashes between government and separatist forces resulted in heavy casualties on both sides. Russia conducted a number of military exercises near the Ukrainian border, while Ukraine and NATO officials accused Russia of arming the rebels and invading Ukraine territory, a claim Russia denied. Clashes between the Ukrainian army and separatists continued until a tenuous ceasefire in February 2015.
‍

In 2017, Ukraine signed an Association Agreement with the European Union, establishing closer political and economic ties. In February 2021, Russia began building up military forces on Ukraine’s borders, increasing numbers later in the year. In December, Russian president Vladimir Putin laid out a set of security demands, including that Ukraine be permanently barred from joining NATO, and the crisis intensified.
‍

The build-up of Russian troops increased, despite announcements that they would be withdrawn. Fighting between pro-Russian separatists and Ukrainian forces escalated, and on 21 February 2022, President Putin formally recognized the independence of the Donetsk People’s Republic (DNR) and the Luhansk People’s Republic (LNR). Three days later, Russia launched a full-scale invasion of Ukraine.Photographed over a period of almost eight years (2013-2021) this project invites viewers to step out of the news cycle and look at the longer-term context leading to the 2022 war in Ukraine.

Guillaume Herbaut, member of Agence VU’ since 2021, is a French photographer based in Paris, France. Alongside press assignments, Herbaut has dedicated himself to photographing historical places, filled with symbols and memory, including Chernobyl, Auschwitz, Nagasaki, and, more recently, the conflict in Ukraine. His photographs have been exhibited in many festivals and venues, including Jeu de Paume Paris, Visa pour l’Image, PHotoESPAÑA and the Silverstein Gallery, New York. Herbaut has received a number of distinctions and awards, including a Visa d’or, the Niépce Prize in 2011, and the Bayeux Calvados-Normandy Award for war correspondents in 2016.Herbaut was a founding member of the l’Oeil Public. He has produced documentaries for French Radio and been a teacher and mentor in workshops in Russia, Spain, Switzerland and France.