Mass graves in the Andes

Photographs about the grief after the years-long battle between the government and the Shining Path. 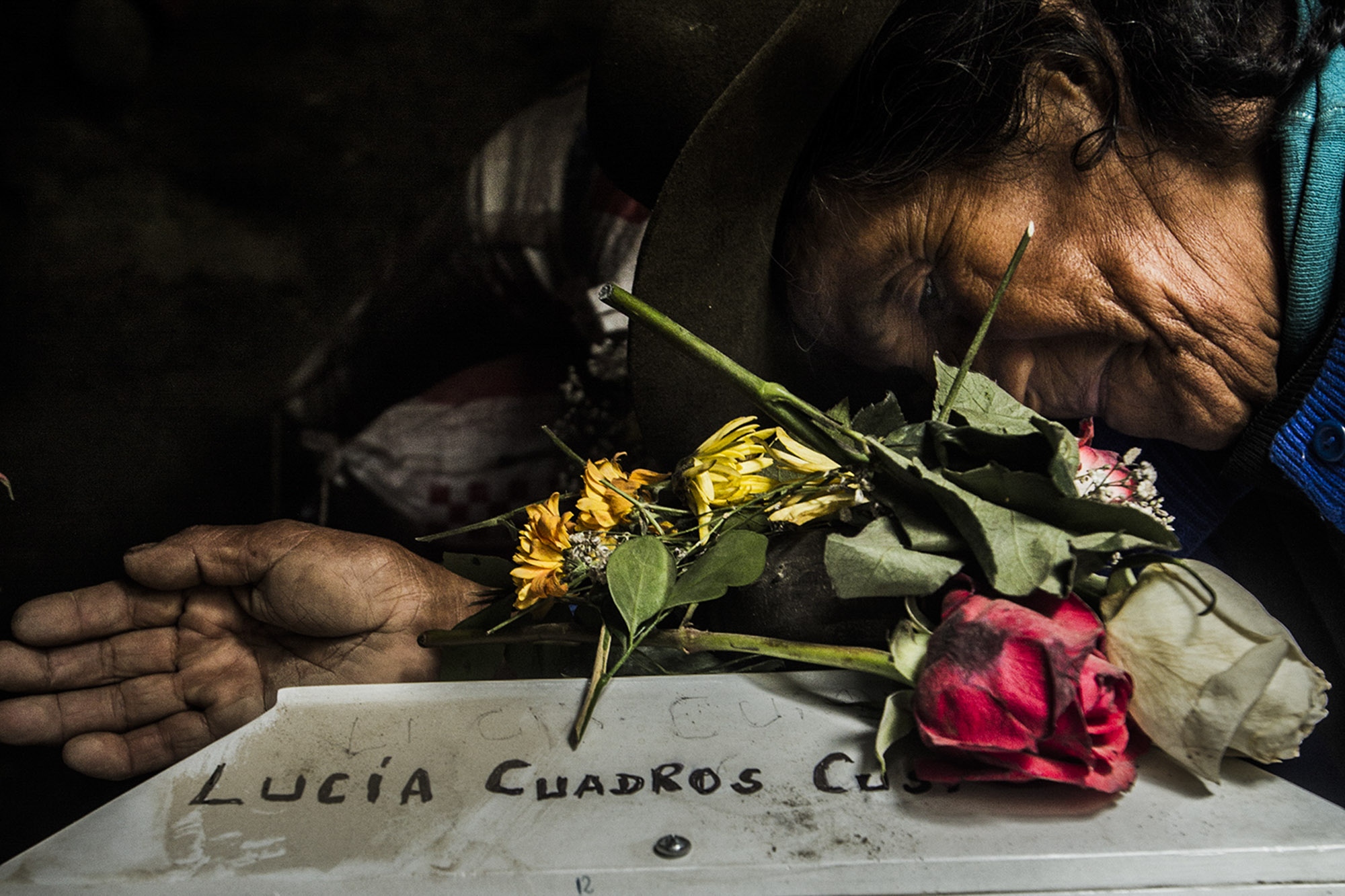 In the 80s, Peru was the stage of a years-long battle between the government and the Shining Path (Sendero Luminoso), a communist guerrilla movement wanting to overthrow the government. Especially in the mountainous Ayacucho Region, in the south-central Andes, many battles were fought. Peruvian photojournalist Max Cabello Orcasitas read the reports of the Truth and Reconciliation Commission and decided to photograph in Chungui, resulting in an emotive series depicting the grief of the native people of the highlands of Peru.

When we think of wars, we mostly come up with the Second World War, the Vietnam War, the Iraq War, and recently the Taliban takeover of Afghanistan. Not often do we think of the battles of the Peruvian Shining Path group, but for Peruvians, it is a hardly healing scar of their history. In the Truth and Reconciliation Commission report, produced in 2003, abuses of human rights were investigated. One chapter, entitled “Representative Stories of Violence”, deals with the distant district Chungui. Max Cabello Orcasitas read the harsh texts and found out that there were no photographs of that part of their history.

“I am not sure if there are images of Chungui of those violent times. In 2003 there was a great photographic exhibition called Yuyanapaq, which was a curatorial effort to construct a visual account of the conflict. However, despite its vastness, it did not include images of the Chungui, except for an anthropological book based on testimonies and drawings about the massacres of Chungui. Some documentaries refer to episodes of torture and women raped by the military. But that happened in a period of democratic opening. This did not happen in either the 80s or the 90s during the decade of Alberto Fujimori’s government.”

The reason Cabello Orcasitas wanted to photograph in Ayacucho was that this was the region with the highest concentration of deaths and disappearances, according to the Truth and Reconciliation Commission. “Of the national total of 69,000 victims, calculations conclude that 26,000 deaths, more than 40%, occurred in this region.”

Traumas from the past
People in Ayacucho still suffer from many traumas at an individual psychological level and a collective level. “You could say that there are different memories: the memory of the victims is different from those who did not suffer it. And there are also denialist memories. There were small populated centres that got protection from the armed forces. Other villages had to live with the suspicion of being members of the Shining Path. Those people lived between two fires, which is still felt today. Even 30 years later, human rights and justice defenders are stigmatized as allies of the Shining Path. Those who accuse are deniers of the massacres of the armed forces. Despite this, little progress has been made at a slow pace in state policy to reconcile the victims of the internal armed conflict, in addition to the fact that there is still no justice.”
‍

When Max Cabello Orcasitas travelled to Chungui for the first time, in 2009-2010, he was interested in who the survivors were. “It seemed to me a kind of Peruvian Srebrenica, a situation of a population that was almost exterminated by different parties: the Sendero Luminoso (Shining Path), the Army forces, as well as local self-defence committees (local militias). After the war, there was a repopulation. I wanted to see this through small events: parties, marriages and christenings, games. I did not want to start head-on with the testimonies of abuse. I wanted to gain trust naturally. I talked and listened to those who wanted to speak and, of course, to those who wanted to share their testimonies. I wanted to start with everyday events and not necessarily those associated with past violence.”

The exhumation processes in the area began in 2011 and 2012, years in which he could not travel to Chungui, but in 2013 he returned to photograph it. “In several cases, the orphans of the murdered participated in the identification of the skeletal remains of the victims, as well as in the exhumations. Many were children or adolescents when the massacres occurred.”
‍

There are many massacres or murders, especially in Chungui and Oronccoy, that have not been of journalistic relevance to the Peruvian media for a long time. “There is a need for survivors to make their grief and the current conditions in which they live visible. There is a lot of indifference of political parties. The rural populations are impoverished farmers with little access to roads, without the capacity to sell agricultural products to the cities. So, they have little influence on the media coverage.”
A personal relation to the events made the suffering come close. “I had an uncle who fled from Ayacucho because his wife, who is my aunt, was murdered. He fled to Lima because he was threatened with death by members of the Shining Path. This happened in 1985 when I was ten years old. He had to leave his home and work in Ayacucho. He never got used to it in Lima. He lived two or three years in my house. He couldn’t get over the episode of violence. He was too affected by the abrupt change of coming to Lima. He was a Quechua speaker, so he suffered different episodes of discrimination in Lima.”
‍

The scene occurred after an initial refusal by the villagers to allow the exhumation. They did not want the skeletal remains to be taken to laboratories located 230 kilometres away. Cabello Orcasitas: “They demanded that the remains, once extracted, remain in the village and be examined closely. After imposing these conditions, the exhumation was allowed and that moment of the men kneeling praying corresponds to the beginning of the exhumations. At some point, I even thought that they would not let me take photos, but no; they (the villagers) wanted their story to be told and recorded.”

Taking sides as a photojournalist is a matter of fact for Max Cabello Orcasitas. “People do not want to talk about the period of violence or its aftermath in Peru. It is committed to oblivion or to support a single type of victorious and insulting memory towards the victims of the armed conflict as well as the process of searching for the disappeared. What I do is see and show the scars or consequences of that violence.”

Cabello Orcasitas came so often to the region that he knew the forensic anthropologists from previous exhumations. “Can you imagine following the exhumations more than five times? I made more than twenty trips to the small towns of Chungui and Oronccoy because history interests me. it is a non-closed chapter in the history of Peru.”
‍

Max Cabello Orcasitas desaturates his images slightly but, at the same time, there is contrast in his images to achieve a sober style, creating a visual correspondence with the dark and mournful subject matter. “I don’t use flash, just ambient light. I liked the kind of photos made by Rodchenko. But years later, I saw that my photos were even soberer and more character-centred. I usually pay a lot of attention to the composition of the elements in the frame, even if it doesn’t seem so. Usually, it takes a long time to take photos. Before I start to photograph, I always explain why I am taking pictures.”

Even though he does not make portraits, Cabello Orcasitas is inspired by Peruvian photographers like Martín Chambi. “There is a generation of Peruvian photographers from the late 90s that I liked: Jaime Razuri, Mayu Mohanna, Nancy Chappel, Cecilia Larrabure, Veronica Salem, Daniel Pajuelo, and Esteban Feliz, to name a few. I am also influenced by the Magnum photographers Bruce Davidson and Josef Koudelka.”

Max Cabello is a Peruvian photographer who lives and works in Peru. He is a founding member of the Supayfotos collective.
web: https://phmuseum.com/maxcabello
Instagram: https://www.instagram.com/maxcabelloorcasitas

Max Cabello Orcasitas was one of the photographers of the Master Award Shortlist World Report Award 2021, documenting Humanity, of the Festival of Ethical Photography. For more information: https://www.festivaldellafotografiaetica.it/wra-shortlist-2021-eng/