Photographs of older people in remote villages in Ukraine. 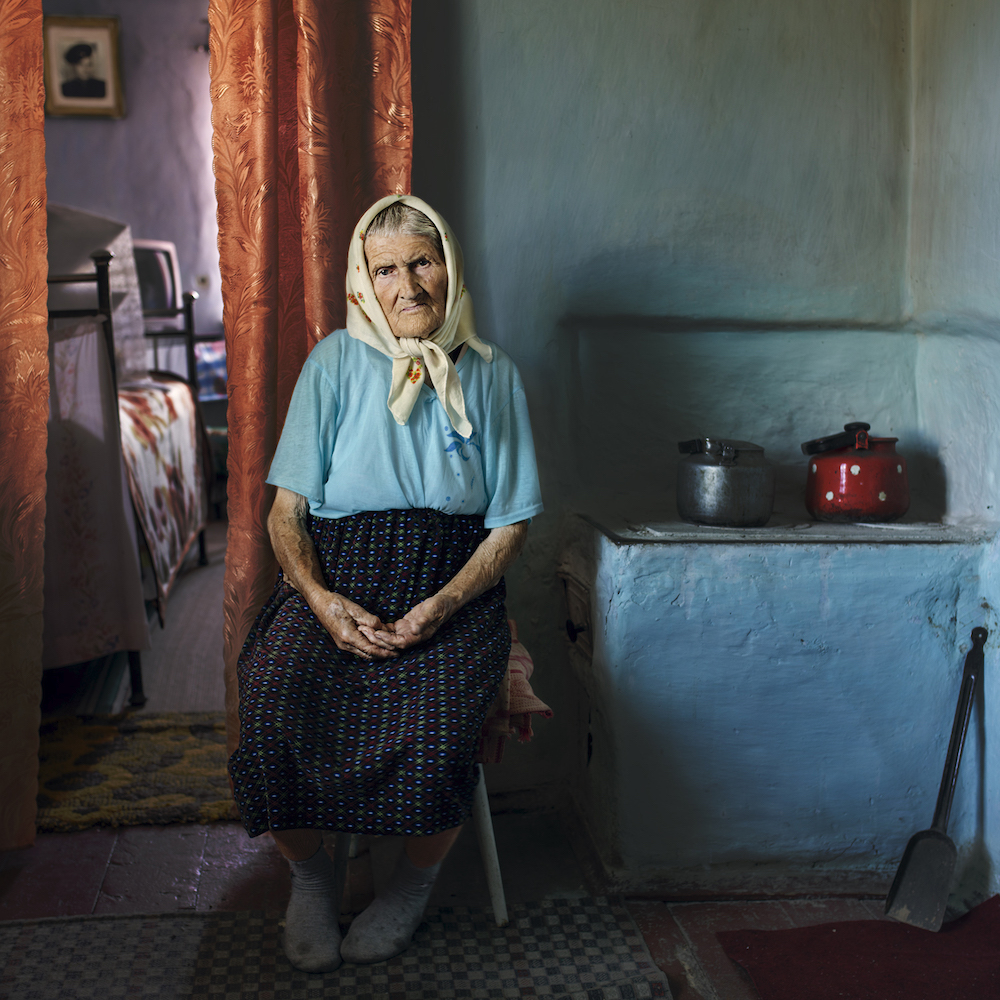 In Ukraine, older people, mostly women, live in remote, desolated, and neglected villages. They live their lives as they used to do for decades, dating back to the Soviet times. Ukrainian-born photographer based in Berlin, Viktoria Sorochinski, made a true-to-life series of portraits, still lives, and landscapes of the villages near Kyiv, where her grandfather and great-grandmother used to live. The project Lands of No-Return took her nine years to complete and shows a way of life that is bound to pass away.
‍

The people in the photographs often have a sad look, showing signs of neglect and loneliness. They dress in another age fashion and live in houses with peculiar decorations full of clashing colours. Nevertheless, Viktoria Sorochinski photographed them with dignity and respect, emphasizing their beauty rather than the poor living conditions. She began this project to commemorate her grandfather, who lived in one of these villages, and to remind herself of her ancestral roots. "Ukraine always remains as a place of home in my heart. For many years, I have been feeling rootless big part of my life detached from any country; the sense of belonging to a country was an issue for me. My connection to Ukraine is largely related to my bond and memories of my grandfather, who died shortly before my family left the USSR. He lived in one of these villages where I took photographs. He was a multidisciplinary artist and a photographer. I used to visit his village when I was a child. It was a happy place in my memory."

Viktoria was born in Ukraine, which was, in fact, the USSR, and left for Israel as a child in 1990. After six years, she emigrated to Canada, and while doing her master's in New York, she lived in the Big Apple for seven years. Finally, she ended up in Berlin, where she was producing her book, Anna and Eve. "When I returned to Ukraine for the first time in 2005, I was astonished by how lifeless my grandfather's village looked. The time was standing still. The houses, the roads, and everything else remained unchanged. The houses were deteriorating as there was no progress. All the young people migrated to the cities. Basically, there was no more life there."

In the villages, the older people are the keepers of the Ukrainian tradition and culture. They preserve mythology and folklore. "I felt that I had to commemorate the last remains of these villages. I started in the village where my grandfather used to live, in the neighbourhood of Kyiv, and afterwards, I expanded it to different villages. Since 2005, I kept coming back to photograph these places, but the final project was shaped between 2009 and 2018."

People reacted quite welcoming. They were happy that someone came to see them and give them some attention.

It was not difficult for Sorochinski to approach the people because she speaks the language and knows the local habits. "People reacted quite welcoming. They were happy that someone came to see them and give them some attention. Sometimes I had to explain to them that they do not need to pay me for the pictures because I was only interested in them. Later, I usually came back and gave them their portraits."
‍

The villagers are primarily farmers or have their little gardens with vegetables and fruits. "They work on the land until they die. It is their main source of food, and in most villages, there is only one little shop."

They had many sad stories about the war and the hard times.

The people Sorochinski photographed often felt neglected and left alone. "They had many sad stories about the war and the hard times; they lived most of their lives in the Soviet time, which was not always that bad because there was always food and work in the kolkhoz. For them, the kolkhozes were safe communities. That time did not have all the negative connotations we would have."

One of the remarkable features of the project Lands of No-Return is how the inhabitants blend harmoniously with their surroundings. Even though they seem not to match, the colours have an earthbound palette ranging from deep blues to solid reds. "Ukrainians tend to decorate their homes quite a lot. They live simple and poor, but they try to put some kind of decoration like embroidered cloth on the wall and flowers or other objects. I often stage some elements in my other projects. However, it was unnecessary to do so in this project because everything fit beautifully, almost as if it was purposely arranged into one colourful ensemble. When I entered their homes, I always had the impression that everything fitted perfectly. Their dress somehow also blended wonderfully with the interior. It is as if they are magically connected to their surroundings as if people and their homes became one whole organism over the years.”

One part of the project contains still lives, like photos of bread, milk, grapes, onions, fruits, or details of the austere yet colourful interiors. Some shots of the landscapes are also added to show the raw surrounding nature. "In the last two years, I decided to add the still lives and the landscapes. I thought it would give a complete impression of the people's everyday lives. I simply captured the still lives exactly as I found them. I kept it authentic as it was. "

Half of the project was shot analogue with a 6x6 Hasselblad on diapositive film. "For the last two years, I switched to digital. As a result, the landscapes are all made digital and have a rectangular form."

The plan now is to make a book that combines three projects, including Lands of No-Return, The Space Between - self-portraits based on her memories and dreams of the Ukrainian villages and Far And Familiar – staged still life also based on childhood memories. " In Japan, I will show all the three projects in one exhibition. I also want to include my grandfathers' photographs in the book. I have his photo archive that he took in the villages. For many years, it has been my wish to pay tribute to my grandfather because I started my photography because of him. He dreamt of having an exhibition of his mother’s (my great-grandmother) portraits before he died."

For the past three years, Viktoria Sorochinski has also been working on another project Poltavaland, about one of the most unique and historically significant regions in Ukraine. This will become the largest project so far. It portrays Poltava's underground culture with its many talented and unique people, as well as mythology and architecture.

Viktoria Sorochinski is an artist-photographer with Ukrainian roots and a multicultural background.  Having lived and studied in Russia, Israel, Canada and USA, where she acquired her Masters of Fine Arts from New York University, she has finally settled in Berlin, Germany.  Sorochinski had nearly 75 exhibitions in 23 countries throughout Europe, North and South America and Asia. Her work is published and reviewed in over 85 international publications including her monograph “Anna & Eve” published in Germany by Peperoni Books in 2013.