The transience of life and human’s subjective perception are the themes of Doug and Mike Starn. 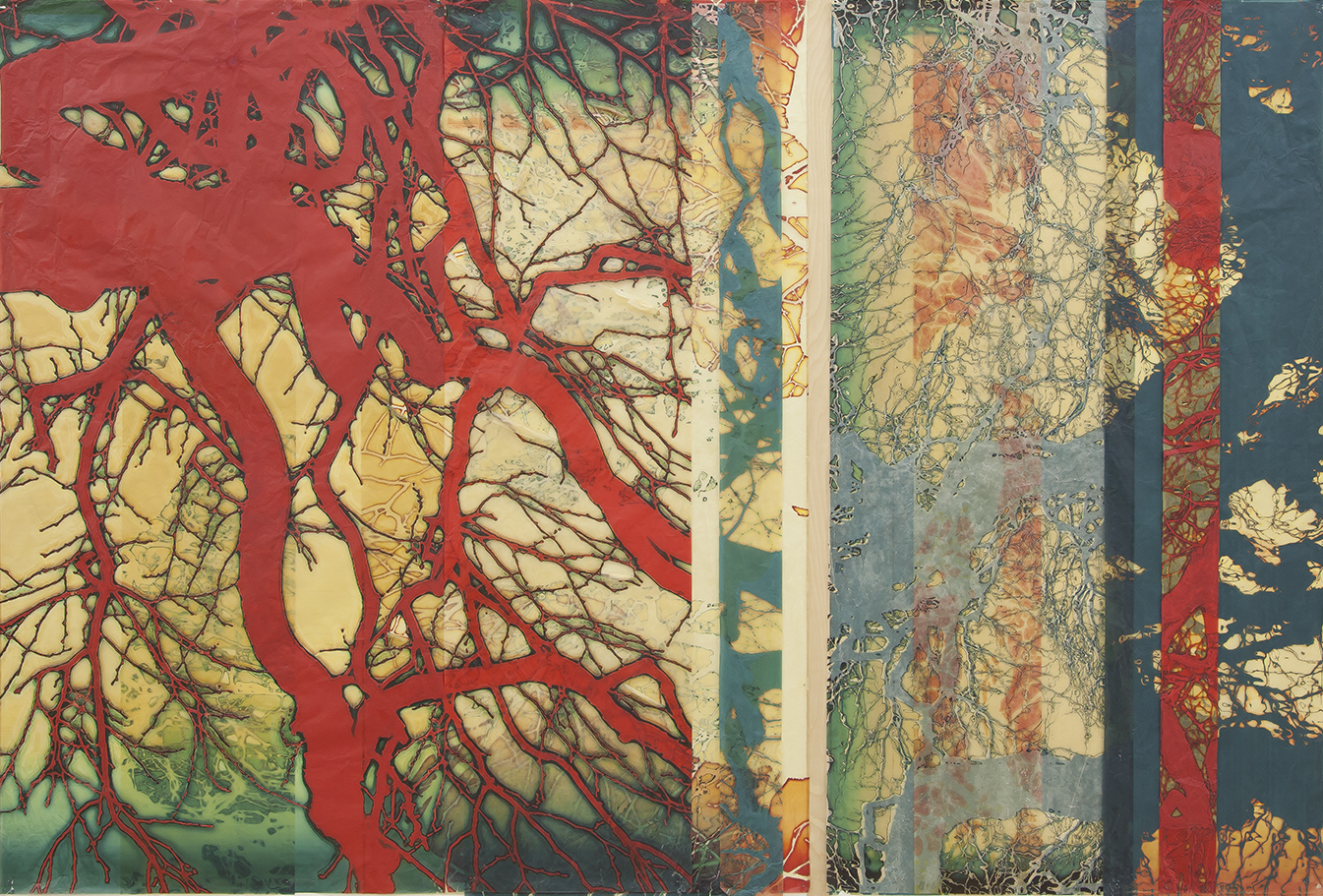 © Doug and Mike Starn | Walked To School All By Ourselves, Ultrachrome inkjet prints, watercolor, and varnish on Kozo paper, 81 x 120 inches, 2016

The analogue and digital prints of the New York twin brothers Doug and Mike Starn are all unique artworks, just like paintings. The transience of life and human’s subjective perception are the themes in their rich body of work. The Starns speak as one individual because they see their artworks as inseparable cooperation. "Together, we are like an individual artist, only that the internal monologue becomes an externalised dialogue between the two of us." Doug & Mike Starn are exhibiting in HackelBury Fine Art Gallery in London.

The sometimes visible Buddhist views, like in the Guanyin series, but often loosely interwoven or detected like in the title The No-Mind Not-Thinks No-Things, are inherent in many works of the brothers. When asked for the theoretical basis, they deny a strictly scholarly approach to Buddhist philosophy. "Well, it's entirely self-taught and absorbed from culture. Although the Buddhist vision of life is a part of our work, we are not serious practitioners. Our personal philosophies come into the work, going all the way back to our earliest work, even before art school. It is the understanding that everything is made of different parts. We found out that the Buddhist view tells that all things on earth change incessantly, and we value this deeply in our work."

In other works, like in Black Pulse, in which the brothers depict skeletonised, almost transparent leaves, you may detect the notion of transience, which is also an essential part of the Buddhist philosophy. "The idea of transience permeates all of our work. You can see it in the earliest work with elements of decay that we put into the photographs from the beginning. You can see it in the Christ piece, in which we relate to Christianity as well. It just flows in and out of our work. And certainly, it's also a part of the bamboo work which is in constant flow, and it is complete yet not finished— being built continuously."

The intriguing works of the series Structure of Thought show silhouettes of bare winter tree trunks and branches in continuous embracing patterns, uncovering the parallel with neurons in our brains. "I'm not quite sure why we started thinking about thought in relation to the trees, but we've always been attracted to photographing tree branches without the leaves from early teenage years. What we came to realise is that a tree is a hierarchical structure. You have one big trunk, and branches get smaller and smaller. We found that if you make a silhouette of that structure, hierarchy collapses and everything is connected. It's not hierarchical anymore. It's rhizomatic— you can instantly go from anywhere to anywhere; everything is connected. And that's to us the way thought works. It's not linear. Thought is not a process in which you start with something and then follow it straight through without all kinds of other factors mixing with it."
‍

The idea of transience permeates all of our work.

When Doug and Mike Starn were photographing at the Cold Spring Harbor Laboratory campus on Long Island, they were looking for a particular tree, during that research; they discovered the similarity between the tree and our brains by sheer coincidence. "We were looking for one specific tree, which we'd heard about but couldn't find. There was nobody around. It was a Sunday, but there was this one woman in an office, and I was trying to describe the structure of the shape of this type of tree. And then I saw something on the wall, and I said: Actually, it looks very similar to that picture there. And she said: 'Well, that's a picture of a living neuron in the brain. We just discovered this process of imaging living neurons' it was a fascinating coincidence."

The physicality of paper

Doug and Mike Starn mostly use special papers for their works because the physicality of the artwork is an essential part of the work. "For the moth series Attracted to Light and the Buddhist statuary, we use a special paper from Thailand. But the silhouetted tree works are printed with a digital printer on rice paper, brushed afterwards with varnish which gives the paper a skin-like transparency."
‍

They also work with the 19th-century colour carbon technique. The carbon process is based on the light sensitivity of dichromate gelatine, which hardens through light. An image is formed by the pigment in the gelatine layer instead of silver. A carbon print is made with a sheet of glass coated with a solution of gelatine, potassium dichromate, and pigment. After it is exposed to the negative, some gelatine hardens, and the rest washes away; this is then transferred to paper.

"For our series of the Guanyin images, we use colour carbon, the first colour photographic printing process. We felt that it had a fascinating effect; it almost felt like colours were being coaxed out of the image, something we had always wanted. It's also very physical, the colours in the works are derived from different negatives, one negative for each colour, and they layer up and become a full-colour image. You can choose whatever colours you want to go for, you see strata of the thin gelatine layers of colour. We use it on paper that contracts and pulls together when it's wet, and then the areas that don't have the gelatine are more relaxed. This physical aspect of photography was always interesting to us. We never saw photography merely as a two-dimensional image. We see it as the same as a painting can be an image, but it's a physical object. The same issues addressed in painting and sculpture can be addressed with photography."
‍

"The colour carbons are all unique, even when you might repeat the same image. What we like about the gelatine is that there's no substrate, so they're very delicate, they rip, and the resulting image printed is incomplete and always different from other prints. As we layer these colours on top, you end up with full colour in certain areas. You see within the colours, and you're seeing how they're independent upon each other, that each layer of colour is just part of the story."

The technique emphasises the notion that photography is neither a window nor a copy of objective reality. "There's an objective reality out there that we're all experiencing and seeing with our eyes, but in our work, we're not recording the visual reality; we're more recreating how we each subjectively perceive reality. Each of us perceives the objective reality with our personal and subjective brains in our own way and mixed with many emotional aspects of our lives and the associations we make. We ourselves perceive reality with a feeling of wonder and curiosity and an appreciation for the complexity of nature."

Unlike other artworks, that of the Starn brothers do not follow the tradition of straight photography. The twin brothers explain that coming from formal training, they were looking for a way to transform old concepts. "We were trained as traditional photographers in the Aaron Siskind-mould with this idea of lintless gloves, no dust on the enlarger and the perfect print and these kinds of things. We felt these ideas were fetishes. It had nothing to do with the art of photography, it was more akin to craft, and we were very frustrated by that and wanted photography to be doing the same things as the other art forms. Paintings change over time, and so do photographs. And that was an interesting thing for us about the transience of time. We always say that art changes the second it leaves the artists' studio because the viewers put their own thoughts on it. Art is not static. The Seascapes goes back to our very earliest days. We grew up near the Atlantic Ocean on the East Coast in New Jersey, and I just remember learning that the ocean was billions of years old, and yet it's always new, it never stops being new, so it's always been a topic for us."

The artworks of the Starn twins are not simply printed photographs but are elaborate mosaics of small prints put together in a large collage. This approach avoids their works being interpreted as single and straightforward photographs. "We started this in our last year of art school. Thinking about the other art forms, painting and sculpture, we felt so limited by scale, and we certainly were limited by financial considerations. We couldn't make big prints at a fancy lab, nor would we want to because we love getting our hands wet with chemistry. So, we wondered: how do you make paper bigger? Well, you tape it together. So, that's what we did. It is also related to how you reconstruct the outside world in your brain, piece by piece. That humble construction is continually going on inside your head when looking at the world. You are putting it together in your head, and we are doing the same in our art."

Doug and Mike Starn, American artists, identical twins, born 1961. First having received international attention at the 1987 Whitney Biennial, for more than 20 years the Starns were primarily known for working conceptually with photography, and are concerned largely with chaos, interconnection and interdependence. Over the past two and half decades, they have continued to defy categorization, effectively combining traditionally separate disciplines such as photography, sculpture, architecture-mostnotably their series Big Bambú. Their art has been the object of numerous solo and group exhibitions in museums and galleries worldwide. The Starns have received many honors including two National Endowment for the Arts Grants in 1987 and 1995; The International Center for Photography’s Infinity Award for Fine Art Photography in 1992; and, artists in residency at NASA in the mid-nineties.

Rebecca Najdowski
An investigation of the inner voice of nature by physical interactions on photographic materials.
Portfolios
•

Frank Ockenfels 3
Fotografiska opens a boundary-pushing exhibition of an American photographer on its third birthday.
News
•
Next
Back to Magazine
By clicking “Accept All Cookies”, you agree to the storing of cookies on your device to enhance site navigation, analyze site usage, and assist in our marketing efforts. View our Privacy Policy for more information.
PreferencesDenyAccept