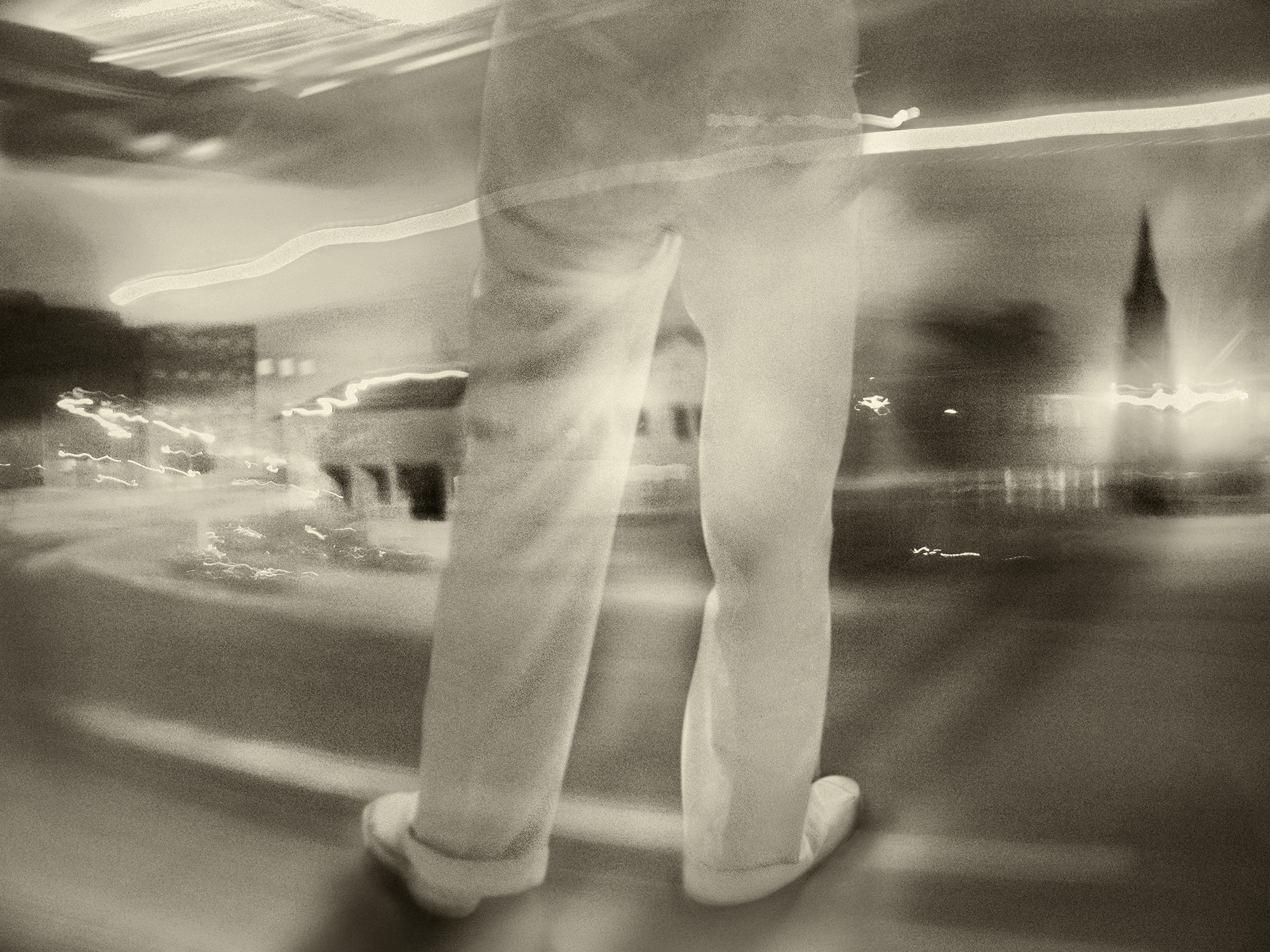 Now is Always begun during the Great Depression when my father, Joseph Harold Trachtman (1914-1971), shot a few rolls of film near his father's drugstore in Center City, Philadelphia. Nearly 90 years later, my sister found the negatives and gave them to me. Working from my father's original negatives, I've combined the people from his neighbourhood with my own images, many of which were shot from windows and moving vehicles. Now is Always is our collaboration across time.

My father lived in Philly his entire life, and his images of friends and neighbours are firmly rooted in one place and time: the corner of 19th and Girard during the Depression. On the other hand, my images are much less rooted, probably because I was pretty much on my own after my parents died—my father when I was five and my mother when I was 15.

My most vivid memory of my father was his legs because that's about all I was tall enough to see of him. His most vivid memory of me? I will never know. And yet, in this work, we manage to speak. After my parents died, I was rarely in one place for very long. Often the view out a car or train window felt more like home than wherever I was living. Over time, I've developed a kinship with blurred bridges and highways, trestles and roofs, the husks of industrial towns racing by at two or three in the morning. In this work, my father's life becomes part of these landscapes– our shared and evanescent homes. There is obviously a personal aspect to Now is Always, but I want the work to be more expansive than a dialogue between the father I didn't know and the daughter he knew only as a child.

With my series Now is Always, I created a feeling of collapsed-yet-expanded time. I want to see what my father saw, and I want him to see what I see. But I also want the viewer to look at the past, and I want the past to look right back; I want the viewer and the subject to each feel the gaze of the other. And by combining images taken almost a century apart, I also want to seamlessly integrate layers of technology and image-making history: his 1930's point-and-shoot, my iPhone, his silver-gelatin negatives, my Photoshop files, our shared sunlight and water, the traditions of ink, elbow grease, and an intaglio press. Now is Always is supported by a grant from the Vermont Arts Council and the National Endowment for the Arts, with additional support from the Tusen Takk Foundation.

About
Vaune Trachtman (Brattleboro, Vermont) is a photographer and printmaker whose work honours the methods and tone of historical processes but without the toxic chemicals. Formerly a master printer of silver gelatin prints and asphaltum-based photogravures, she began to feel that her immune system was being compromised by those processes, and she now makes gravures with little more than light and water. Her images explore the evanescence of dreams and memory— a "fleeting, wondrous, sacred habitation" (Collier Brown, Od Review). Vaune was among the winners of the 2018 Alternative Processes National Competition, and she was shortlisted for the 2019 International Hariban Prize. Her newest series, Now is Always, will be shown at The Griffin Museum of Photography in summer 2021, and she is a semi-finalist for The Print Center's 95th ANNUAL International Competition. It is supported by a grant from the Vermont Arts Council and the National Endowment for the Arts, and the Tusen Takk Foundation. Vaune was born in Philadelphia and received her M.A. from NYU and the International Center of Photography.