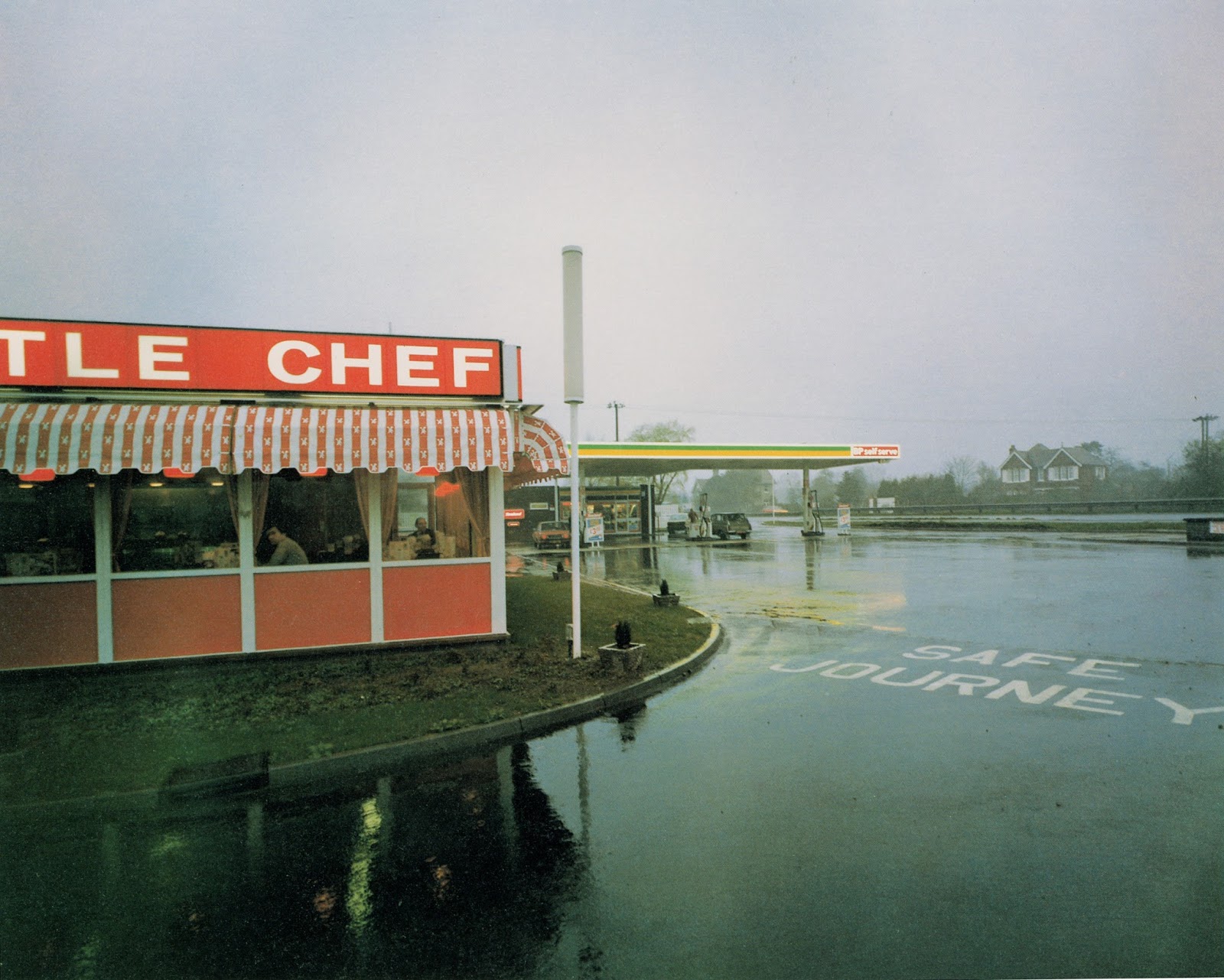 A1 The Great North Road is a reprint of the original book published in 1983, the first book made by the famous British photographer Paul Graham, at age 25. After forty years, the photographs show a remarkable maturity of the young artist. As his fellow colleagues in the USA, Graham was one of the first to apply colour photography with a large format camera. The reproductions of photographs in this brilliantly reprinted book are crisp and sharp. The original book has been sold out for many years, and with it only being available at auctions for thousands of dollars, this may become a very wanted reprint.

It might sound strange to begin with the end of the book, but for the sake of clarity, it is good to start reading Graham’s work backwards, one in 1983 and one written for the reprint of 2020.

In 1983 Graham wrote about the birth of his project. He said inspiration first emerged during his early childhood, while on holiday with his parents: “To an impressionable five-year-old, travelling up the Great North Road seemed a close contender to visiting the moon.” Graham still experienced the spell of the highway in his twenties. “Over the intervening twenty years, the A1 was to remain a source of wonder, closely associated with imminent holidays and the thrill of travelling northwards in the dead of night.”

Graham was only 25 when he started to work on the A1 project, very young for a photographer who had already worked on 4x5 inch and expensive colour negatives. This book propelled him into the world of photography, even though at the time, he was an unemployed photographer. His approach in the early stages of his career was a straightforward, documentary type of style, which he later adapted into a looser, narrative way of working. “For me, the struggle to create art from the world as-it-is was the highest calling of the medium, and where one should toil.”

For the book A1 The Great North Road, Graham captured elaborate, but seemingly random photographs of different genres, such as portraits, still lifes, interiors and landscapes. On one of the first pages, you see a bold , formally composed picture of the old Methodist Church in London, an example of the New Topographics style in the 70s. One page on, we find a portrait of a woman at a bus stop in Mill Hill, North London, that has been taken in an almost “street photography” style. Both styles of photography often recur in the book.

The A1 runs from London all up to Edinburgh. It was the main motorway for decades, before this role was taken by the new M1. In the book, we already see the decline of the A1. The 80s were the years of Margaret Thatcher and the right-wing parties, who privatised the mining industry. On the photographs, you feel the sadness and the boredom of the industrial area where the A1 passed through. Apart from the misty and rainy landscapes, the vibrant interiors of bars, cafes and motels fantastically portray expression and colour treatment. The photo ‘Interior of Café, Londonberry, North Yorkshire, 1981’, displays Eggelston-like colours in the corner of the café. The picture captures the worn-out green and yellow walls, an old wooden table with a bright green plant on top, pink chairs, and a white refrigerator on the side.

In the 80s, it was quite revolutionary to photograph in colour, especially in the field of documentary photography. Paul Graham recalls this with a certain irony in his 2020 publication. “I was working in colour, which was radical for the UK at that time, dominated as it was by black-and-white photography and the entrenched hierarchy around that. Many who regarded Al's images could not see beyond the use of colour, could not see the love and empathy for a changing country, or for photography itself. For them, the colour negated any other concerns but time took care of all that.”

With A1 The Great North Road Paul, Graham created a marriage of the 'British documentary tradition' with ‘New Colour', as a critic pointed out later, something he was not aware of at the time. Interesting is the psychological change of approach of the subject matter in the mind of Paul Graham. In his more recent work, the image itself and the ways of seeing the world, the light and the moment are more important than the documentary topic alone.

In retrospect he writes of his first book: “Then again, aren't they all countries of our minds? Isn't that the issue here? The lands we 'live in', their meaning and narratives are mostly a web we spin, stories we tell ourselves of history, identity, heritage, 'character' — these are the cloth in which we wrap ourselves, to explain or justify entrenched attitudes and political viewpoints.” He seems right in that; a photo is a personal narrative, but at the same time this book is a valuable and intriguing documentation of the recent British (and European) past, that we tend to forget.