Refugees of the ongoing war 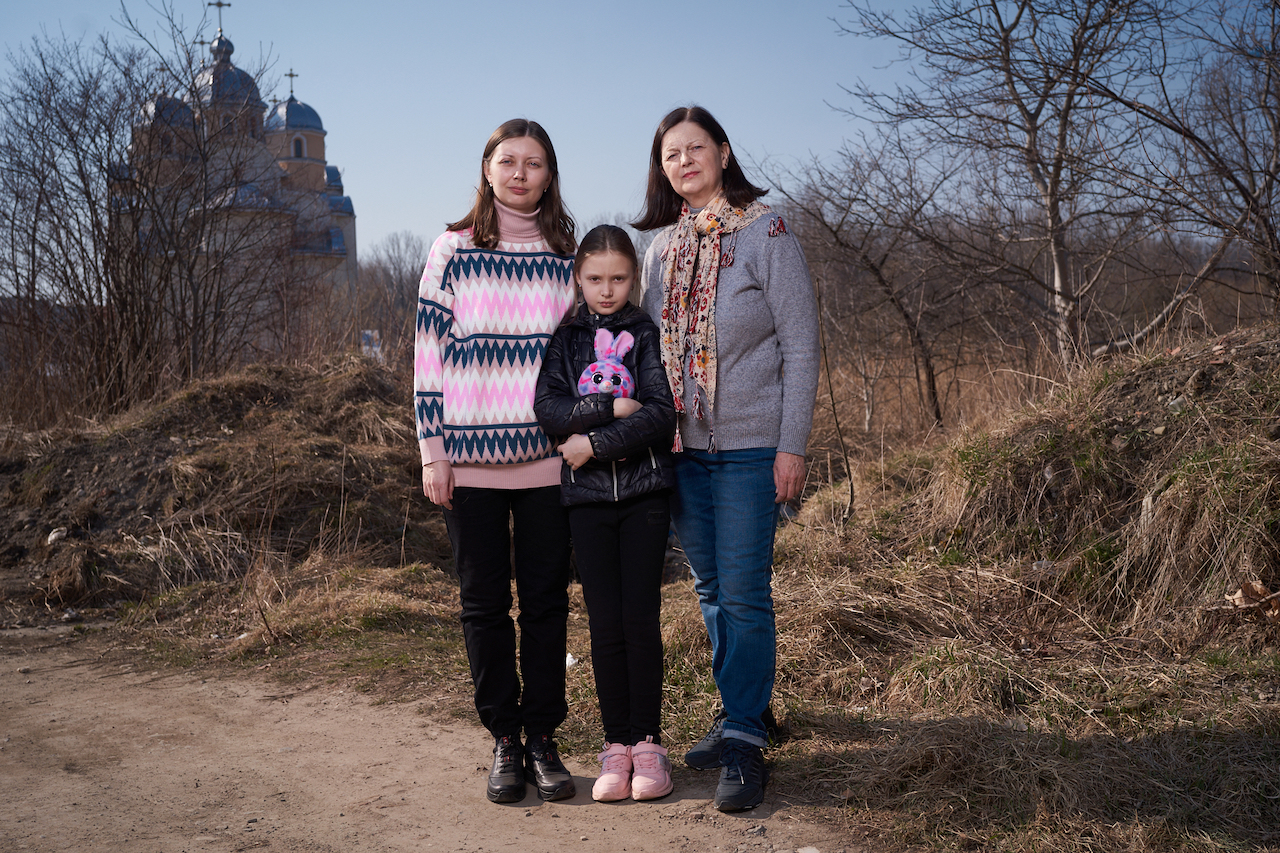 Serhii Korovayny, a young Ukrainian photographer, educated in Syracuse, New York, USA, is mainly focused on storytelling. He tells his visual stories in the regular reportage style, frequently with assignments for different international newspapers, but he adopted the documentary portrait style in long projects like Refugees Twice.
‍

The Russian-Ukrainian war is an ongoing topic in the life and work of Serhii Korovayny, coming from the Donbas region but recently travelling between Kyiv and Lviv. At the beginning of the recent invasion, he emotionally took charged pictures in the outskirts of Kyiv, starting on the 24th of February 2022. For example, the photo of a young woman looking from the balcony over an empty mass of buildings with an expression of total insecurity. “I made this photo for an assignment for the magazine Politico. It was the second day of the invasion. Politico was looking for human stories about people who are staying in Kyiv. There was a threat that Kyiv would become sieged. She was a progressive Ukrainian girl who posted on TikTok, living with her boyfriend. She was looking over the area while you heard artillery in the distance. She was the only sign of life in this grey urban landscape.”

The recent invasion is not the beginning of the war for Serhii, who is coming from the Donbas. It already started in 2014. “I began to cover the war, at least the human side of it, at the start of my career. I am not a news photographer because I focus majorly on the human aspect of the conflict.”

He can handle the situation well as a photographer, he says, but it was and still is a tough experience for Serhii Korovayny as a human. “With the present war, we first started to secure our families, so I drove from Kyiv to western Ukraine with my wife before I could start shooting my stories. After that, I started doing reportages in Lviv and then later in Kyiv. So, at the moment, I’m travelling between those two cities. While I’m based in Kyiv, I’m currently working in Lviv, doing assignments for the Washington Post, WSJ, and others.”
‍

Being confronted with the Russian-Ukrainian conflict in the Donbas region at an early age, most of his work is connected to this ongoing drama. For Serhii Korovayny as a photographer, the human side of the war is more important than military actions. “Humans give a face to the war, which is a more powerful way to communicate than showing war actions. I have a personal connection to the stories I cover, thereby making my photography more empathic. There are already many photographers covering the war, so I am not going to the front, which also would ask for a tougher preparation. The human part is, therefore, more important. The media part of the war is nowadays as important as the ground battle.”

Humans give a face to the war, which is a more powerful way to communicate than showing war actions.

As an example of his human approach, Korovayny photographed a marriage and the baptism of a soldier’s child. “In general, I want to talk about the power of the Ukrainian nation facing such a threat in my photography. This simultaneous ritual took place in the western city of Lviv. The soldier was leaving to fight in the eastern part of Ukraine. There is still a place for traditional rituals. The soldier is going to fight specifically to defend this kind of life. As our enemy does, he is not fighting for something abstract like the great Russian empire.”

“I also took stories of people taking care of their pets in wartime. You don’t expect people in such circumstances to have time for animals. In contrast to the massacres of the Russian army we have seen in Bucha, the city in Kyiv Oblast, I want to emphasize the difference between Ukrainian people and the Russian army.”
‍

Korovayny was a fan of Alec Soth; as a result of his American education, he did an MA in Syracuse. “I was following his style of dreamy images. When I started a story about the Dnieper River, I saw there were traits of his project, By the Mississippi. I also feel myself a storyteller; my heart is in photography. My photography changed more to the direction of the editorial style since the war. I also admire the Ukrainian-American photographer Sasha Maslov, who is doing editorial work for the New York Times and others. I try to build my photography career between those two influences.”
‍

Everybody agrees that you should always look for a topic close to yourself.

Sergey Korovayny alternates his reportage work with documentary portraits, which becomes apparent in his latest project, Refugees Twice. “I was looking for a niche, a topic I could cover and which could last longer than the breaking news. Everybody agrees that you should always look for a topic close to yourself. First, I had to leave my parents’ home in the Donbas, and now I was forced to flee from Kyiv. I have been looking for people who had a similar situation and became refugees twice; first, those people had to leave their homes in Crimea and Donbas for the government-controlled Ukrainian territory in 2014. For this series of documentary portraits, I photographed refugees who had to flee their homes twice. Since the beginning of Russian aggression, more than ten million Ukrainians have been forced to become refugees.”

Serhii Korovayny is an editorial and portrait photographer based in Kyiv, Ukraine. He covers the Russian-Ukrainain war, and also focuses on topics of the humanitarian side of the conflict, environmental issues, etc.As a photojournalist, Sergey worked with Ukrainian and international media, including Washington Post, Wall Street Journal, Financial Times, and Politico. As a commercial and editorial visual storyteller, Sergey collaborated with the United Nations, OSCE, Danish Demining Group/Danish Refugee Council, and Premiere Urgance.