The fight against darkness

Photographing the cultural dichotomy between Soviet and European values. 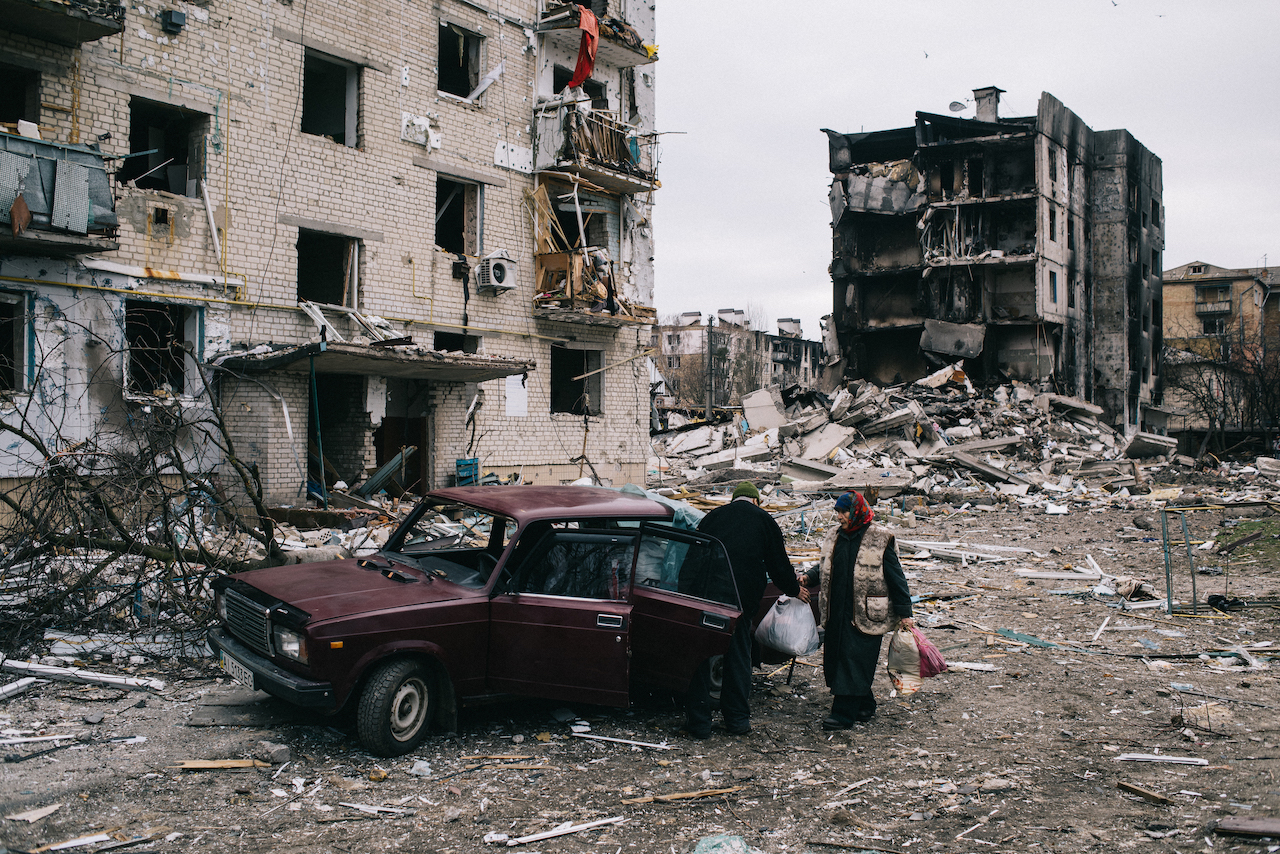 Ukrainian photographer and visual artist Maxim Dondyuk has been following the socio-political events in his country for years. He made the photobook Culture of Confrontation, about the Maidan revolution in 2013, in which the central theme was the clash of different cultural systems. The cultural dichotomy between Soviet and European values remains at the heart of his work. Now Dondyuk, who got world fame with his interviews on CNN and his publications in Time magazine, is working on the ongoing war between Russia and Ukraine, photographing cruel atrocities which are hard to behold.

The project Culture of Confrontation is about two cultures in Ukraine having different world views. During the Maidan revolution, one culture was reaching for the Soviet Union, filled with nostalgia, and another culture craved an independent European country. Maxim Dondyuk: "Nowadays, the situation is totally different. This is not a fight between two cultures that live in one territory; now, it is a fight with an external enemy. Before this war, it was an inner fight, which was fuelled by Russia with weapons and nostalgic ideas. This confrontation led to the war in Donbas in 2014 and the annexation of Crimea. Now Russia understood they lost this fight, and that's why they want to destroy the country or return it with force under their influence. We now face the final fight of the Ukrainian people for their independence."

Dondyuk's graphic photographs of the Russian-Ukrainian war do not leave the spectator unmoved. They bite into the eyes and leave no room for mitigation, but neither do the pictures push you into a lethargic state of numbness. This is because of his personal approach, turning facts into deeply experienced empathy. Even when we see dead people in their kitchens, brutally and soullessly killed by the Russian soldiers, we feel the dignity of the photographer. The photos are shot from nearby, and they drag you into the harsh story.
‍

Is it possible for Dondyuk as a photographer to remain impartial and try to capture both sides of the conflict, or is it mandatory to choose a personal and subjective approach? He believes neutrality is not the right way to stand in this war. Instead, it is a natural process to take sides. "You can only stay neutral if you come to a country as a tourist or a journalist for just two weeks. But if you immerse yourself in the situation, or like me, if you live in this country for a long time, then you will choose sides, no matter if you want it or not."

This counts even more if it concerns your mother country, like with Maxim Dondyuk. "That's why I think that neutral photography is emotionless photography. Of course, it is important to show both sides, and during the Maidan revolution, I tried to show both protesters and police sides. But at war, it is not possible. Once I get to the other side, I will be arrested or just killed. And so, I believe in subjective photography. For me, objective photography is senseless. It doesn't contain anything but facts. And such a function can be done by a video recorder or web cameras. You don't need a human being for this. A human is needed for subjective photography, reflection, and emotions."
‍

As an abstraction of the current warfare, Dondyuk discovers the universal theme of light and darkness as being the metaphysical expressions of eternal earthly struggles. "Light and darkness can manifest themselves in the natural light in the natural shadow, as well as they can manifest themselves in the Ukrainian people and the Russian army. This is a game with metaphors, with light and with meaning. Evidently, for me, the Russian army is darkness. Here in Ukraine, we call the Russian soldiers Orcs, the fictional humanoid monsters in Tolkien's books. They can be killed by thousands, but they continue coming. It seems like they have no thinking themselves. They don't even want to think; they only were ordered to go. Of course, thinking this, they are darkness, and the Ukrainian people are light. And in my photos, I try to display this point of view through light, darkness, geometry and all kinds of characters."

I think that truthful images of the war will finally get to the Russian people.

Photography as a document and as art can influence public opinion and have changed wars in history, like the famous napalm girl from Nick Ut. But when Russia has closed up all the media, how can Ukrainian photography ever reach the Russian audience? Does Maxim Dondyuk think that photography can change public opinion now? "Russia never opened anything. There was a short moment of relative openness during the last ten to twenty years. But in the end, Russia has always been a closed country. They tried to be open, but they failed, and now they want to close their doors again. During the Soviet Union, a lot of literature and music were prohibited, and the radio was forbidden. But people managed to listen to the Voice of America and listen to forbidden music and read forbidden books. Therefore, I think that truthful images of the war will finally get to the Russian people. Any person who wants to find them will find the opportunity. People who do not want to get alternative information and are content with the brainwashing of Russian television will never look for any alternative. They cannot be influenced; only their personal experience will affect them. And those who want will look to see alternative information and will be able to see photos and videos and read. And be influenced in their opinion."
‍

Maxim Dondyuk (b. 1983) is a Ukrainian visual artist working in the field of documentary photography. His practice integrates multiple mediums including photography, video, text, and archival material. Maxim’s works often explore issues relating to history, memory, conflict, and their consequences. Selected past projects include ‘TB epidemic in Ukraine’, a two-year work which investigated the problem of tuberculosis in Ukraine; ‘Crimea Sich’, is both a series of photographs and a documentary, which tell about a military upbringing of children in the secret camp in the Crimea Mountains and its pitfalls; ‘Between Life and Death’, is a personal reflection on the aftermath of wars through the ruins and devastated landscapes, previously been battlefields; ‘Culture of Confrontation’, which in 2019 resulted in the book of the same name, and became a turning point in author’s artistic work. In his ongoing project ‘Untitled Project from Chernobyl’ Maxim works with vernacular and found photographs in the restricted areas, combining them with landscape photographs of the territories that were burned by nuclear energy.