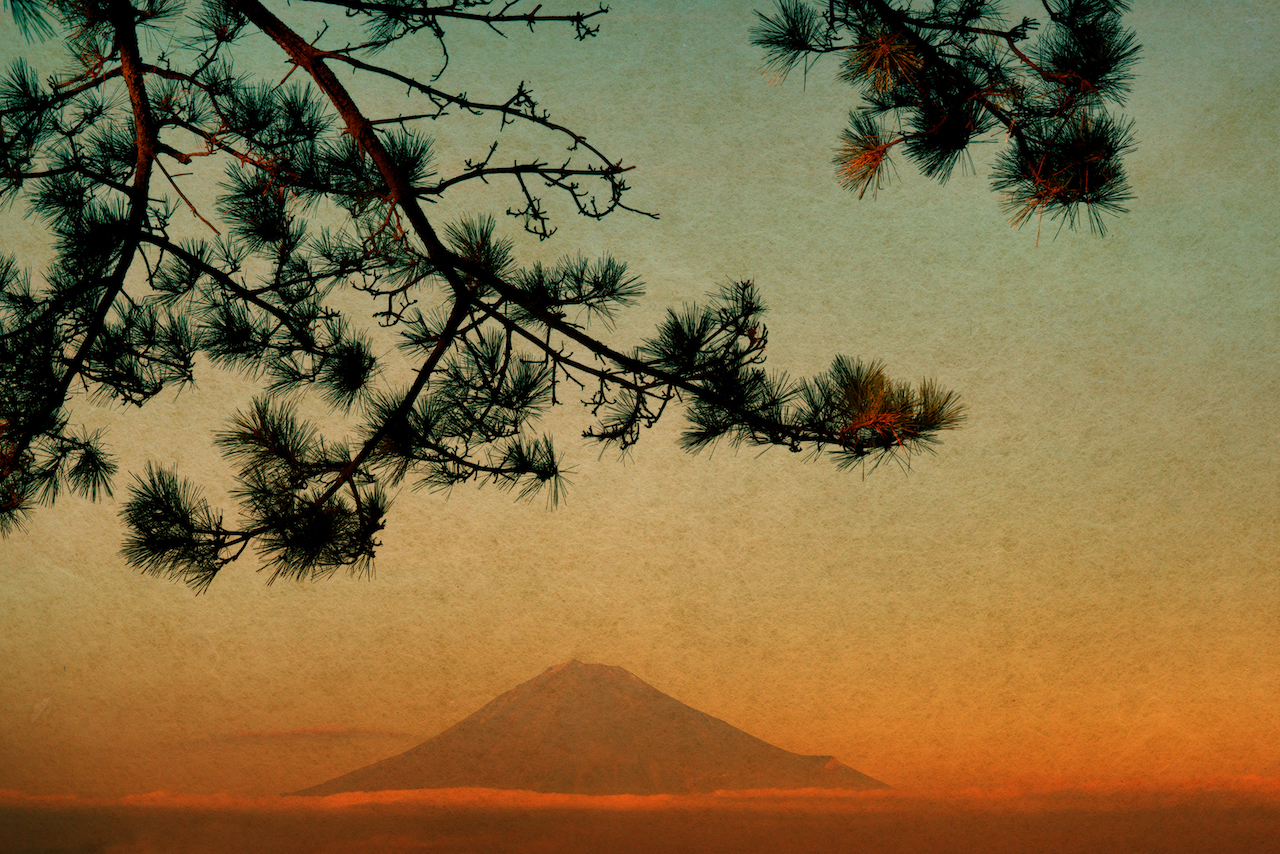 The intimate prints of the Spanish artist-couple Albarrán Cabrera have a magical gloss, emanating miraculously from beneath the fragile upper surface. The optical magic comes from their fine craftsmanship, using very ancient techniques like gold leafing. But the spiritual magic arises from the meditative approach of their subjects, provoking the spectator to delve into his own memories and experiences. "By manipulation, we interrogate the real."

Most of the subject matter of the extensive body of work of Albarrán Cabrera is related to nature. In an abstract and poetic manner, they photograph landscapes with mountain views, branches, trees, leaves, blossoms, water, skies and fishes. They chose these subjects for their universal and intercultural appearance. In our conversation, Angel Albarrán and Anna Cabrera explain their choice together with one voice: "We realised that nature is everywhere and international. When photographing a tree, nobody would ask what the tree means because a tree is a tree. Nature has an abstract and universal element. Therefore, it can be abstracted from the place. For us, nature is a perfect tool to explain abstract thoughts because it is legible for everybody, as it is not culturally confined. We experienced that people tend to localise subjects. In some photos, we depict fishes, and people start to say: this must be in Japan. But in Barcelona, we have red fishes too! Then we try to explain that our photography is not about a country or a culture but about the symbolism of fish in general. Our images are not attached to a place. Therefore, nature, in general, is a perfect subject matter to explore our universal themes."
‍

For Albarrán Cabrera, photography is not only a craft or an art but even more a way to understand the world. Preparing for their photographic journeys, they tend to read lots of books about philosophy and science and watch innumerable movies. By accumulating knowledge and insight into the world, they make their art a university of life. "In art, you work with both reality and expression. In between those two parameters lies the most interesting part. By nature, photography is a medium close to reality, but you can play with photography by expanding your expression. This in-between part is more spiritual and difficult to explain in words. Through images, you are able to understand the world more intuitively. We ourselves learn every time again to see the world. As photographers, we are in a constant process of learning, not about the medium itself but about the world. We read, and we look at what artists and scientists say. We learn from that knowledge, and thus, photography is helping us to understand reality."

Reality is not an objectively observable phenomenon but a highly philosophical notion, even more, a mental construction. In history, all cultures have made their own constructions of reality, often narrated in religious tales. Angel Albarrán and Anna Cabrera explain: "Each group of people has made different explanations about the world. Also, quantum mechanics have come with new ways of interpreting reality. Our goal is to create photo works in which we express our own experience of the world. When you look at a photo, you tend to think that what you see is real. We are playing with this convincing force of photography."
‍

By the realistic nature of the medium, people who look at photographs often ask the question of where the photos were taken. But the artist duo wants them to look for the spiritual meaning behind the image. "The most important thing for us is to ask why we create our work. We give the spectator a hint in order for him to interpret the photo. We want to force the spectator not to ask where this photo was taken or how did you make this photo. Why did you take this photo? We want to play with the medium. We force ourselves to crop the image, change the light, turn the image around, or even juxtapose images. By manipulation, we interrogate the real."

By manipulation, we interrogate the real.

In Buddhist philosophy, it is explained that our perceptions are embedded in our emotions. And emotions are preserved in our memory. For Albarrán Cabrera, the function of our memory in visual perception is at the core of their work. "Each of us is influenced by our history. We look with virtual lenses at the world. We look with our culture and our family history in our mind. This creates emotions when we perceive reality. Memory is also related to our identity because, with memory, you know who you are."
‍

Oriental, and especially Japanese culture has influenced the couple in their way of thinking but also in their craft of making images. "The eastern culture and philosophy are important for us. We fell in love with Japan. The way they see reality is different from the Western way. We are also influenced by Greek philosophy. Studying Buddhism and Chinese philosophy, we also realised correlations with Greek concepts. And now, quantum mechanics approaches ancient thought. It explains in modern terms what intuitively has been formulated by ancient philosophy. But Christianity diverted from this line of thought. God created humans, and nature is only at the service of human beings. The Japanese are closer to nature because their religion encompasses nature."
‍

Many of their works are from the series The Mouth of Krishna, which is related to the Indian tale that in the mouth of Indian God Krishna, the whole universe is present and visible. "In the theory of the universe's origins, you have the Big Bang, and from there, everything came into being. With the expansion, time was created. From this notion, you can derive that we all share the same molecules, beginning with the stars. This myth is thousands of years old, but it accurately explains that the world is united and comes from the same origin."
‍

The Catalan couple doesn't take their inspiration from other photographers. "We don't want to end up copying what others are doing. Images are ubiquitous. Images stay in your mind and can influence you subconsciously. It is more helpful to find inspiration in other fields of culture. A painter has a blank canvas. He has to create a world, but a photographer must start with reality. That is why we cut and crop our images to give hints to the spectator to create his own interpretation."

When we are shooting photos, we lose track of time, and we are totally connected with the world around us.

It is known that the American photographer Minor White asked his students to meditate before shooting in nature. Albarrán Cabrera have a similar approach when they start taking photos. "The concentration is more profound when you meditate beforehand. Then it seems you are floating when you are shooting. Your subconscious is then taking the photos. When we are shooting photos, we lose track of time, and we are totally connected with the world around us. Japan is our meditation place. In Japan, we experience a different sense of time. Meditating is like creating a plain canvas of the painter. It makes you more perceptive of what you see. We experience that nature gives us metaphors, waiting for us to discover them."
‍

Photographic materials play an essential role in their practice. The artists use old photographic techniques like platinum-palladium, cyanotype and ancient artistic techniques like delicate Japanese gampi paper and gold leafing. The golden layer, which had already been used by the Egyptians, Persians and Byzantines, creates photos of imaginary golden leaves. "Many pictures we print with gold leaf on the back, creating the yellow gloss. That is why we hardly have the colour blue. We use the gampi paper on which we print the image; then, we apply gold leaf on the back of the paper. Originally, we come from black and white photography. We love the platinum process, an old and very rich printing technique. We wanted something similar like platinum but then in colour. We realised that in Japan, they use gold as a background on which they paint. In this way, the chromatic spectrum is enhanced. The light falls on the picture, and some photons pass the paper and bounce on the gold, creating the yellow colour, which in return influences the colour of the pigment. This creates a hue which you cannot see in a normal photo paper. For the colour photos, the gampi paper is printed with an inkjet printer. But the black and white are made with platinum-palladium also on gampi paper or the French cotton paper."
‍

The choice for the small sizes of the final prints is a mixture of material limitations and a wish for greater intimacy. "We force the spectator to come near the image and look attentively to see the fibres of the paper and experience the physicality. In the end, a photo is a physical object, not an image on the screen."

All the prints are handmade, so they all are unique in their own way. That makes them valuable and creates a natural limit to the edition of each artwork. The photographic object itself, rather than a digital copy, reveals the texture, emulsion, depth of the blacks and paper structure. "You must see the artwork in real life, in three dimensions. We are playing with the print a lot which is only seen in the real print itself. The collectors who know our work sometimes want a specific print they see in the gallery and not another of the same edition. They know that each copy of the same image is different."

Angel Albarrán (b.1969, Barcelona) and Anna Cabrera (b. 1969, Sevilla) have worked collaboratively as art photographers since 1996. A rich inner philosophy about memory and experience — and a special curiosity for photographic chemistry — guide their aesthetic practice. Influenced by both occidental and oriental thinkers and artists, their photographs question our assumptions of time, place and identity in order to stimulate a new understanding of one’s own experience and perception. For the artists, “being conscious of our surroundings isn’t just an important part of life —our surroundings and how we interpret them is life as we know it.”