The series Übergang (transition) of Grit Schwerdtfeger shows the passing of our time into an unknown future. 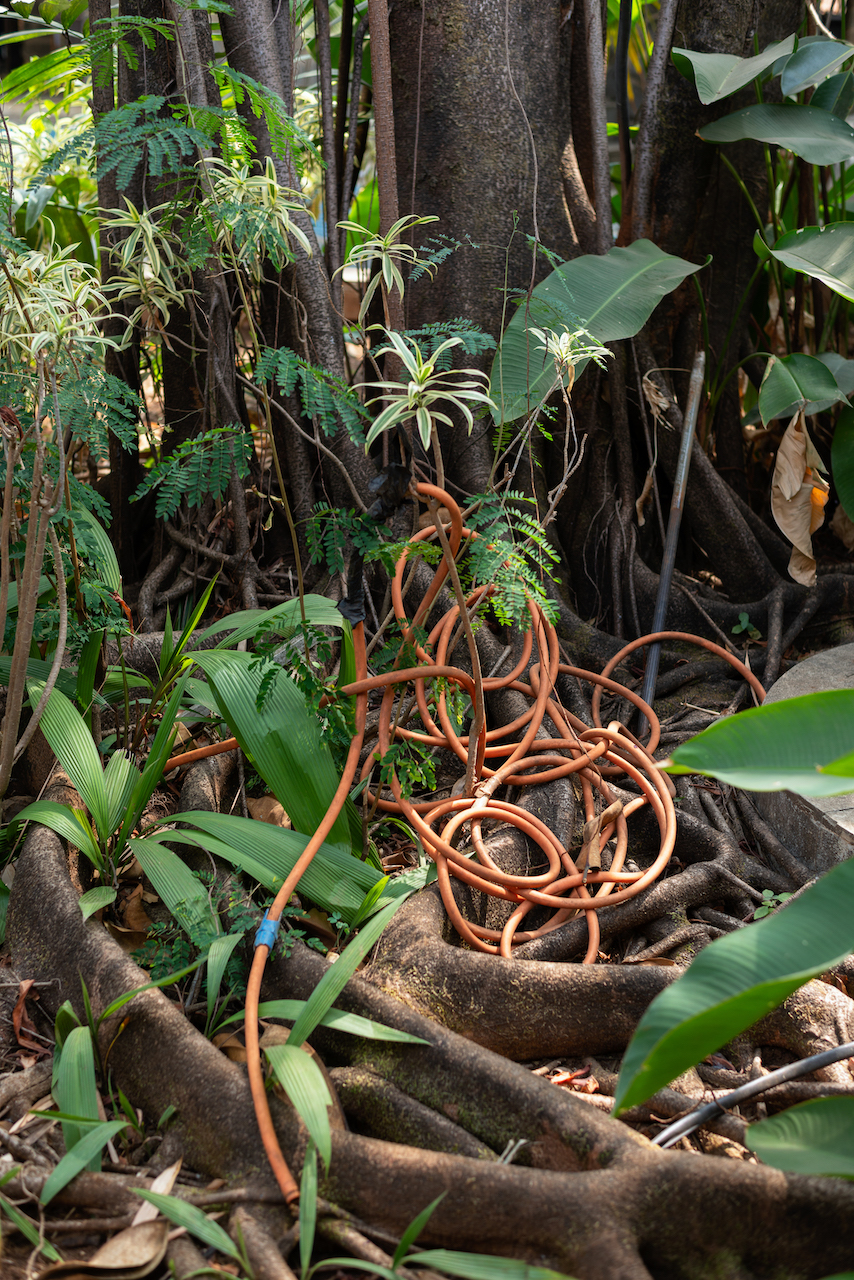 What connects a young person, green bricks and a water hose near a tree trunk? The existence itself, the transience, the passing of time, the hope for a better future and more. The series Übergang (transition) of the German photographer Grit Schwerdtfeger shows the passing of our time into an unknown future. An exhibition in Galerie Peter Sillem, Frankfurt, Germany.

Can there be a form of timelessness, a state of eternal sameness of our lives and our consciousness? Sometimes we can experience this in a state of meditation, but in our daily life, time is running. Grit Schwerdtfeger tries to reveal a sense of timelessness in her photographs. "I like to think of my photographs as "timeless" in the sense that there is no specific time or moment which is important to their meaning. They are certainly more about phases than moments."

While Schwerdtfeger does think about where we come from and who we used to be, for the Übergang series, her perspective was more about the future than the past. That is why we see young people in the pictures. "I think it's more productive to think about where we're heading to. We live very much in an age of transition. That's where young people come into play. Adolescence is a transitory time in one's life. These young people will have to live with the changes that we have caused. But, at the same time, they are the ones who may be able to make changes which give me hope for them."
‍

The series Übergang shows people and the natural environment, which makes you think which metaphor is hidden in the landscape. Schwerdtfeger says: "This series is about other transitory aspects as well. What separates nature from culture? What happens if we no longer try to tame nature or if we start to manipulate it? How can we transcend borders and continents and think of this world as one? As for my other series, Das ganze Wasser (All that water/The whole water) that is on view at my current show in Frankfurt, time plays a role insofar as the photographic moment, the split of a second enables us to stop the movement of the water, to see the water and to become aware of its force. And, of course, that fraction of a moment is instantly over. But it doesn't matter when exactly these photographs were taken — yesterday or ten years ago."
‍

For Schwerdtfeger, landscapes are appropriated spaces. "My earlier work was primarily about landscapes as spaces that people have cultivated to be able to make use of them, often for leisure activities; in my series on the Atacama Desert, the question of human appropriation of inhospitable spaces was important to me. And I suppose, Übergang is my own appropriation of the landscape."
‍

In many contemporary photo series, we see various genres, like portrait, landscape and still lives. The viewer is supposed to combine the images internally into his own story. Or is there no real coherent story to be found behind pictures, and do we have to approach works like these differently? "I think of my photo series rather as projection screens than as stories. Associations are more important than narratives. It gives me freedom to work with still lives, portrait and landscape."

The photos seem to have been shot in different areas, but considering geographical locations as necessary information might form a psychological trap when we consider the work of Grit Schwerdtfeger. "My series Übergang is also about transcending borders and continents. It's not really important to know where exactly the photographs were taken as long as it can be noted that the series spans continents. For my work, a specific place is of as little importance as a specific moment."

Was the series conceptualized, or did it evolve organically from her life? "It did very much evolve organically from my life. The point of departure was a four-week stay at the UWC Mahindra College in Pune, India, where young people from all over the globe study together. It's a deliberately diverse student body based on the idea that education is a force for peace and sustainability. The students come from very different cultural and socioeconomic backgrounds; they live and learn with each other and from each other what change is needed in the world and how they can make it happen. It was a very impressive experience that evolved into a much larger context and resulted eventually in my series Übergang. The three girls in this series, Jasmin, Salsa, and Snigdha, were students at the UWC Mahindra College."
‍

On the wall, the printed photographs have different sizes. How important is the size of the photographs, and what does it communicate? "Each image has a "right" size. Size also changes the content. When you make associations, sizes play a conducive part. New connections between the pictures arise, or it can enable us to make connections. The way we hang the pictures also emphasizes the power of the individual picture."

Politics is on a deeper level, beyond the immediately visible.

Politics beyond the visible

Grit Schwerdtfeger says there are undoubtedly political and social aspects to her work. "It is on a deeper level, beyond the immediately visible.  Take my series Das ganze Wasser, for example. I took these pictures in Peru. The Rimac River is the primary source of water for the desert city of Lima. In the Andes, it is powerful. However, if landslides obstruct the river, as was the case when I was shooting this series, the drinking water supply for the metropolis of nine million succumbs. However, it's not essential to know these details if you look at the photographs. They speak for themselves and will hopefully make the viewer think about all kinds of things."

Grit Schwerdtfeger, b. 1971 in Anklam, Germany, studied photography at the Academy of Visual Arts in Leipzig under Astrid Klein and Joachim Brohm, graduating as his master student in 2001. Grit Schwerdtfeger has received numerous scholarships and awards, including a DAAD fellowship to study in Cuba and a one-year residency at the Faculty of Fine Arts in Madrid. Her work is included in corporate and private collections in England, France, Austria, Belgium, Germany and Canada. She is a member of the lux photographers' collective. Since 2012 she has been teaching photography at the Ostkreuzschule für Fotografie in Berlin.