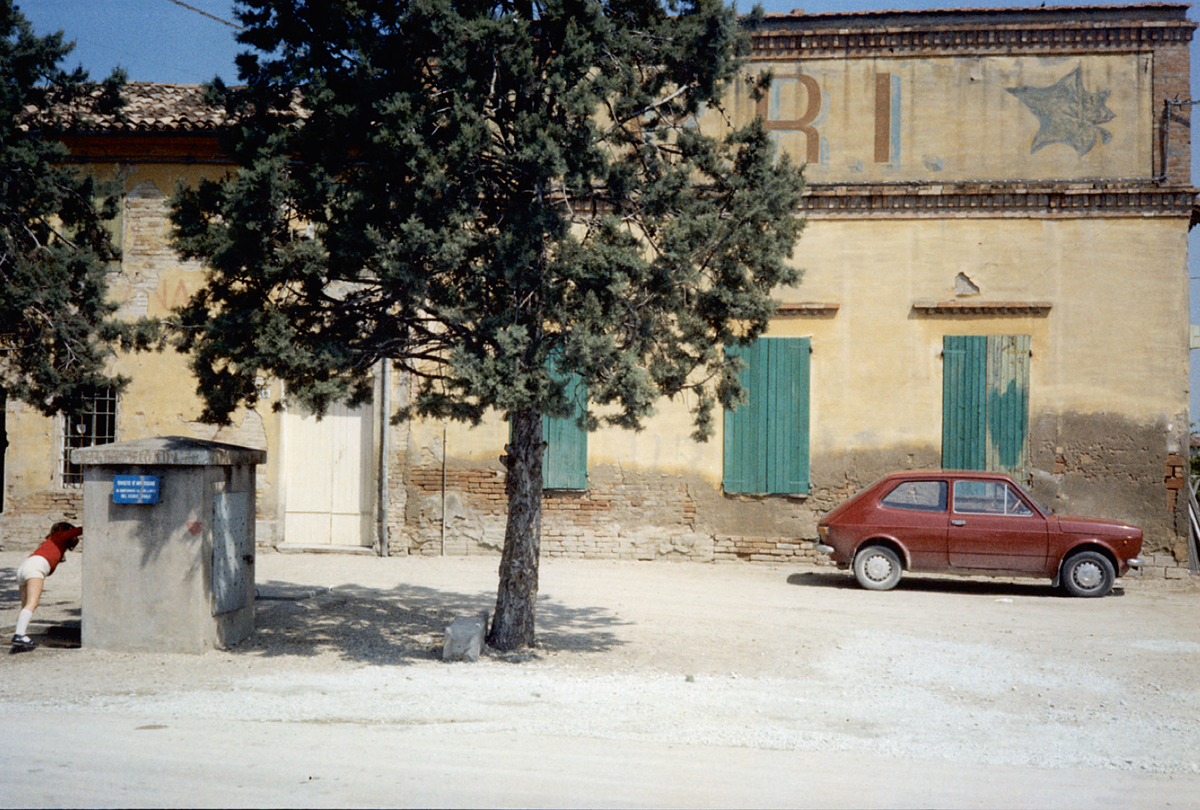 The book Tra l’atro of Guido Guidi is a little gem, consisting of the early colour works, produced with a little camera in the 70s and 80s. The book shows that Guidi was and still is a remarkable observer of the daily things of life: streets, people, buildings, and the passing of time, rendered visible by the changing of shadows.
In the book, we see parts of cars in the city, rainy highways, people in a bus, but also an old television with a blank greenish screen, a heap of sand and buildings with the ubiquitous Fiat in front. You might say that Guidi is the Eggleston of Europe.

Guido Guido, now 79, is an Italian photographer who has been photographing his surroundings, both urban and landscape, for 40 years. He was one of the first to take photos in colour, usually with his large 8x10 inch plate camera. The view camera became his instrument because it forced him to look slowly. He drew his inspiration from American photographers Stephen Shore, among others, as well as from Renaissance painting. Guido has always had an eye for the urban environment, and especially everyday architecture. The growth of the city, the suburbs, and insignificant streets.

In an interview, he once said that his photographic work is capturing the transience and the change of time. "Everything is transformed as time goes by." The camera is for him a tool to better see and understand the things in the world, especially the transformation of things, the change.
Guido makes his photographs in an intuitive way in which he intervenes as little as possible with his consciousness. Architecture in the broad sense of the word is the centre of his photography. According to him, each photograph is a recalibration of the perspective discovered by Renaissance painters. According to Guidi, his work has a political aspect, coming from the status of photography itself.

In the interview in the back of the book, we can read how the book came to be. His friend Marcello Galvani had a lab where he wanted to made some prints, whereafter Guidi presented him his old negatives. Galvani printed most of the negatives and Guidi did the final edit. Guidi, in fact, never liked the small format very much because of the lack of sharpness. As a beginner, he already wanted to possess a Hasselblad. The photographs in this book must, therefore, be seen as preparatory sketches for the rest of his whole career.

Selected from Guido Guidi's archive by Marcello Galvani, this book presents 94 colour photographs made with small-format cameras between 1976 and 1981. Mostly unpublished, these images form an ideal link between two phases of Guidi's work that are already well known. After the irreverent black and white snapshots of the early 1970s, this series marks Guidi's progressive shift toward the colour work he began to investigate in the early 1980s with a large format 8x10 camera. Here we already see the photographer's growing fascination with his quotidian landscape, including vernacular buildings, ordinary people, and visual accidents, yet caught with a quick, peripatetic eye that questions the possibility of grasping the flux of experience and the notion of photographic time. "Tra l'altro" – which translates as incidentally, by the way, or among other things – acts as a historical moment of transition in Guidi's visual thinking, but also, in his own words, as "passing observations" and a way to "make contact" with the outside world.