Trapped in a golden cage

The gated community as a social and psychological laboratory. 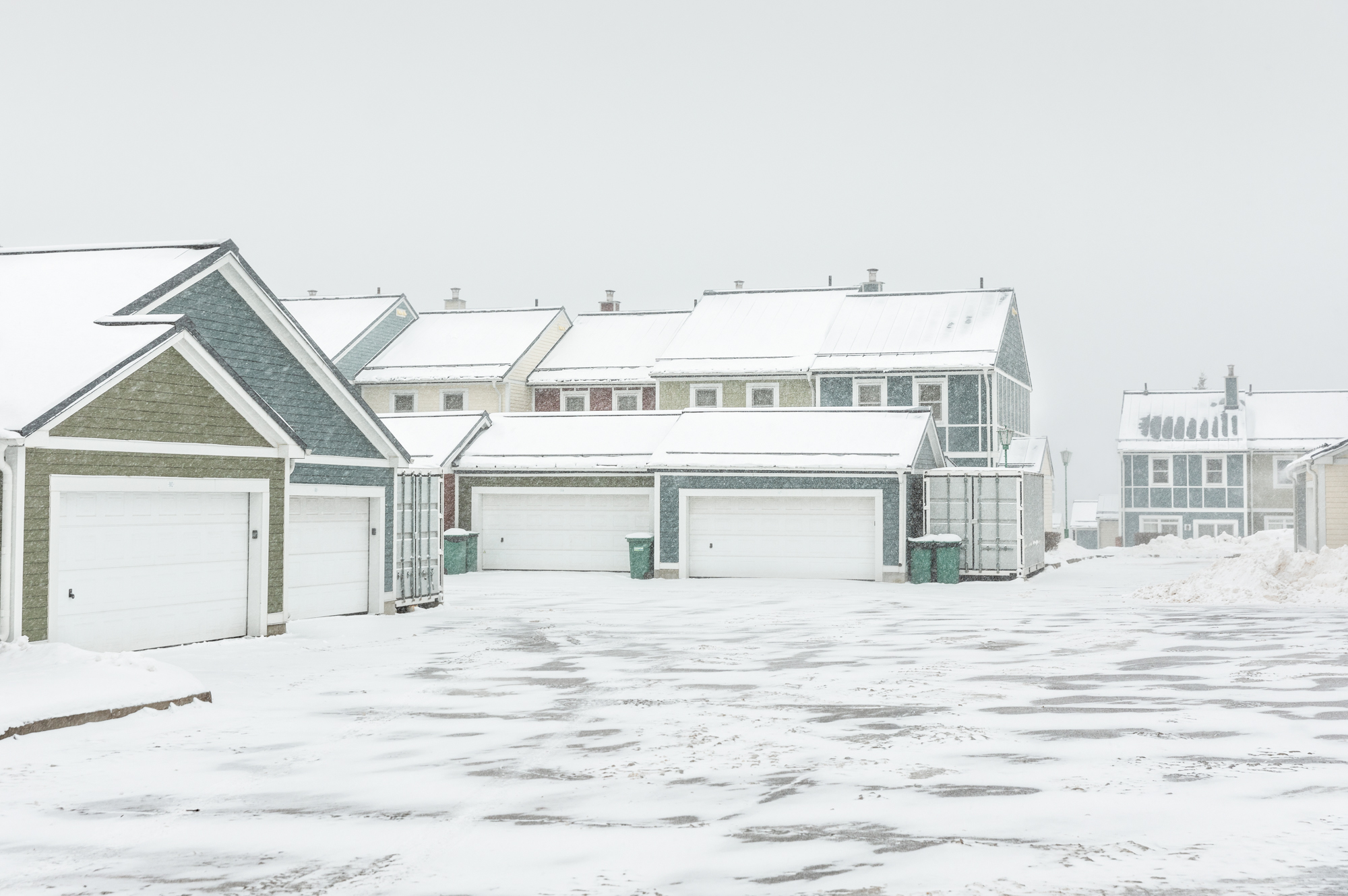 In the photos of Roxana Savin, we see modern, neatly maintained houses in a snowy landscape, women's hand putting white flowers in a vase - background dull grey, well-ironed shirts sorted by colour - blue and grey, and women on their beds - looking bored as if they are captivated in a luxurious prison. These are uncomforting photos of an autobiographical project with the not less uncanny title I'll be late tonight. We talk to the Romanian artist Roxana Savin: "This project was made while I was living in a gated expatriate residence, on the outskirts of Moscow. I lived there for eight years."

During the long winters, while the husbands were at work and the kids in school, the gated community was tranquil. The expatriate women spent most of their time inside their homes. Savin: "The social structure of this community was patriarchal, in the sense that men and women performed traditional gender roles, with men being the main breadwinners and women were staying at home. A wife who leaves behind life in their home country for the benefit of her husband's career is called a 'dependant' on their visas. According to a InterNations survey, 84% of the spouses who follow their partners abroad for work are women. In Russia, the percentage of women-dependants was even higher than this. During my stay in the expatriate community, I came across only a few cases when the roles were reversed."

Roxana Savin used her stay in the gated community as a social and psychological laboratory. "In this particular social structure, I was trying to make sense of the notion of power in marital relationships and its dynamics, following the changes brought by the family's migration. As an expatriate woman, the feelings of displacement inherent to the process of migration were exacerbated by the sense of confinement in the domestic spaces. I'll be late tonight is an exploration of these notions of gender roles, power and social structures."
‍

Savin left her home country, Romania, more than fifteen years ago together with her husband. She has a law degree, and both were working while they lived in different countries. But once in Russia, she decided to stay at home raising her children. Does Savin want to make a statement about women's rights with her project? "Women might have different experiences with regards to being a housewife, and not everyone staying at home is unhappy. My project is not aimed to represent a universal experience but my own subjective feelings about this role. Being a housewife carries negative connotations in society. It creates the assumption you are dependent, without ambition, vulnerable, uninteresting. Women's role as mothers and homemakers is not valued in a capitalist society, favouring profit-making, and housewife status is lower than her working spouse. Social isolation is real, and during that time, I struggled with my own sense of identity, with finding fulfilment and purpose."
‍

During her study at the Fine Art School of Photography in Moscow, she developed a vision of photography as a form of dialogue and resistance. "My fine art background fostered the interest to explore how the subjective, artistic approach can reinforce the objective documentary image and add to its value. It is important to emphasise that my project lies at the border between documentary and fine art genre. It reflects my subjective feelings and perceptions, rather than being a faithful documentation of the expatriate community. I'm very interested in the thin line between objectivity and subjectivity, fiction and reality, and the ambiguity between the documentary framework and metaphoric and conceptual narration."

My project lies at the border between documentary and fine art genre.

The expatriate community was not an example of a liberal and free atmosphere. "There was little tolerance towards other models of families rather than the picture-perfect nuclear family. Interracial families, gay couples had a difficult time fitting into the community. There was a pressure to construct and maintain the appearance of an idealised family and idealised family life, where the challenges related to adjusting to a new country or to raising kids, tantrums, disabilities, the frustrations of domestic work, marriage crisis were not spoken about. Making the work was my way to express these thoughts and feelings."

Why are women more likely than men to find themselves in the position of homemakers? Sociologists agree that generally, women make more adjustments for their marriage than husbands do. "The most competitive jobs in the capitalist economic system seem designed for men without family-related responsibilities. Besides, men's unequal implication in the domestic sphere prevents women from participating fully, as peers, in the labour market. Speaking from my own experience, as a housewife, you might feel isolated and invisible in society. The fact that you are in a foreign country, not speaking the language, makes the isolation more profound without your support group of family and friends. The home in the expatriate residence was a golden cage, the doors were open, but there was nowhere to go."
‍

The home in the expatriate residence was a golden cage, the doors were open, but there was nowhere to go.

The photographer is aware that there are no absolute truths about these issues, and she believes it would be wrong to assume that all housewives are unhappy. "The purpose of my project was to highlight the complexities of their situation and the nuances of the breadwinner/homemaker model. Making the portraits, in particular, prompted a lot of questioning around the idea of authenticity and empowering through representation. It was important to try to avoid what is ultimately the language of patriarchy: the objectification of the women, stereotypical, conventionalised gender posing and a gaze that was victimising my subjects."
‍

On social media, we are forced to publish an idealised version of ourselves, giving a false identity to housewives, states Savin: "The aestheticized housewife ideal, popular on social media, exploiting the image of a glamorous housewife persuades people to develop a persona which is not their own. It reinforces traditional notions of femininity and engagement in care and beautification practices and perpetuates their image as passive consumers rather than being part of the social economy. Many of my female friends were not comfortable with admitting they were just housewives."
‍

In her book I'll be late tonight, Savin combined text and images to reflect on the constant chorus of voices in our lives and on the role of language as part of a larger discourse in shaping collective behaviour and personal identities. "Women face strong conventional societal expectations to be caregivers and homemakers. The expectations for appropriate feminine behaviour can affect an individual's choices. Also, within the social structure of the expatriate community, the unwritten rules of behaviour were attached to the sense of belonging to the particular identity group, and there was a pressure that the women behave according to group identity ideals."
‍

Roxana Savin finds visual language an artistic instrument for conveying the ideas of the project. "The decision to have the winter as a backdrop for my story was taken quite early in the work process; it was one of the few ideas I felt strongly about from the very beginning.
A metaphor for the state of mind, the eternal winter alludes to a state of hibernation and suspends the perception of time and place. There is a sense of waiting and absence, a longing for renewal, which resonates with my experiences as a migrant and housewife. The objects that inhabit our domestic spaces, or the lack of them, tell something about our identity. My images might look peaceful, but I'm very drawn to the tension between the apparent and the hidden."

Savin finds the storytelling capabilities of the medium limited. "We want our images to tell stories, but in fact, I've been growing a bit frustrated with the limitations of the medium when it comes to storytelling. While working with book designer Alla Mirovskaya, who has a journalistic background, we discussed integrating written material in the book. Since my project does not belong to the traditional documentary genre, including testimonies and written accounts of facts or events to contextualise the work did not seem fit."
‍

Is there a truth in the portraits of the women in this project? Have they been staged? "I do not seek to capture in my portraits the 'truth' about the subjects, neither to expose their vulnerabilities. I'm reluctant to the idea that capturing a fleeting moment's facial expression amounts to capturing the truth about a person and revealing something about their character. A photograph is just an illusion and should be treated as such. It's equally revelatory to picture the subject the way they want to be seen. I think we are not wrong to extend the notions around understanding identity in performative terms to photography. A photograph is an intersection of gazes, and the way people pose for the camera is representative of how they want to be perceived. They are active subjects involved in the making of the picture."
Savin adds that the photograph is a construct, the recording of a performance. "I'm interested in the way the act of posing for the camera is a projection of our individual identity while at the same time being connected to a collective identity, an awareness and desire of belonging to a particular social group. When someone is posing for the camera, they know they are being observed, and they construct their identity through gesture, dress and attitude in the spaces they occupy."
‍

Savins best ideas come during the night, and she always keeps a notepad and a pencil on her bedside table. "When I'm in the middle of an intensely creative period, I have the tendency to become obsessive about the work, and I keep the images and the process to myself and not share it with other people. It's a very intense, emotionally charged process, and during this stage, I am quite sensitive about other people's reactions to the work."
For inspiration, Savin reads books about sociology and psychology, but is reluctant to study other photographers during her projects. “I think it important to stay informed and look at other photographers' work, but not necessarily when you are in the middle of a project. It's important to remain truthful to yourself, make a work you are genuinely passionate about and not be afraid to dig until you understand why you want to make the work because 'why' often leads to 'how' to make it."

Roxana Savin (1978) is a photographic artist currently based in Geneva, Switzerland. She was born in Romania, part of a generation who experienced both communism and post-communism. After acquiring a law degree in Romania (and a MA in Legal Studies by Brunel University UK) and working in the legal field, she emigrated and lived in different countries in the last 15 years. She studied photography at Fine Art School of Photography Moscow (2016-2018). She was awarded an MA with Distinction by Falmouth University UK (2018-2020). Her personal experience of migration informed her interest in how social forces and individual's experiences create a process by which previous notions of identity may be challenged and redefined.