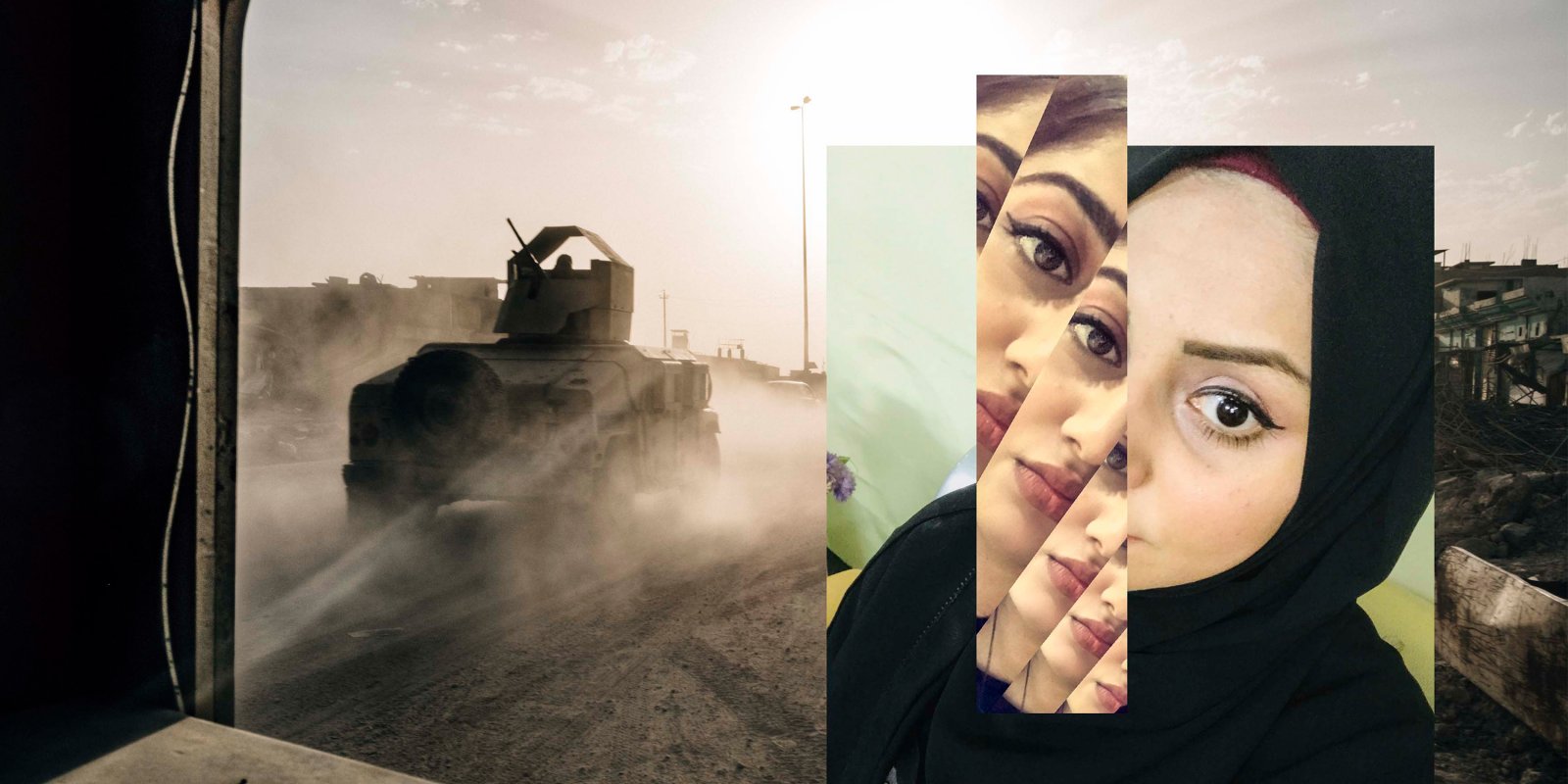 With her body of work Leave and Let Us Go, Alexandra Rose Howland (1990, US/UK) presents an intimate portrait of Iraq, a country that is often misunderstood and misrepresented. In 2017, Howland moved to Iraq and began her long time work to convey the complex reality of people caught up in conflict. During her time photographing there, she started collecting smartphone photos, videos and family photo albums of over fifty Iraqis from across the country, creating Leave and Let Us Go.

88 km in photos
How does one convey the complex reality of people caught up in conflict? As a photographer, Alexandra Rose Howland takes an inventive approach to communicating geopolitical events. In order to convey what she found after moving to Iraq in 2017, Howland began to document the eighty-eight-kilometre road between the relatively quiet Erbil to the frontline in Mosul. Seated atop a Landcruiser, every three seconds she took a picture of the landscape passing by her lens. She digitally stitched the resulting images together into an infinite panorama: from a local market in Erbil where life seems like business as usual, ending at the ruins of the Al Nuri Mosque in West Mosul which was destroyed in 2017 – and where IS leader Abu Bakr al-Baghdadi proclaimed the Caliphate in July 2014. In 2017, Mosul was recaptured by Iraqi Government forces with allied militias, the Kurdistan Regional Government, and international forces after more than two years of occupation by IS.

Selfies, Snapchat videos and moments of war
The exhibition Leave and Let Us Go in Foam 3h only shows the very end of the panorama: depicting the start of the reconstruction of the historic mosque. This scene forms the surface on which hundreds of photos from the smartphone archives and photo albums are pinned – those were collected from more than fifty Iraqis collected by Alexandra Rose Howland. These people, young and old, were willing to share their digital archives with her, offering an intimate glimpse of their daily lives. The complete collection consists of some 300,000 images, including selfies, Snapchat videos and photos of loved ones, as well as horrific moments of war. Precisely because of this criss-cross, one is confronted with different realities of a country where many are trying to build up as normal a life as possible, whilst dealing with the complexities of foreign interference and multiple militias trying to seize power. The intricate web of narratives proves it is impossible to determine who is on the right lines. Howland's own photographs are also mixed into this whole – no single vision is dominant. As such, Leave and Let Us Go is an intimate and multi-dimensional portrait that returns the narrative power of an often-misunderstood country to its own citizens.

Withdrawing troops
US President Joe Biden announced earlier this year that he would end the "War on Terror" by withdrawing US troops from the Middle East. The exhibition title is an oft-heard statement among Iraqis, deriving from the famous Iraqi song Oh My Heart by Bassam Al-Ali. Leave and Let Us Go expresses the frustrations of the Iraqi people: when someone pretends to be a friend or ally and ends up abandoning them to their fate.

About the artist
Alexandra Rose Howland (1990, Boston, US/UK) lives in Athens, and works mainly in the Middle East and North Africa. She studied Fine Arts and International Relations at the University of Southern California. In 2015, Howland changed course: she moved to Turkey and left behind a career as an abstract painter. From 2017 to 2019 she lived in Iraq. In 2018 she participated in the Joop Swart Masterclass of World Press Photo. Howland has worked for National Geographic, Wall St Journal, and Le Monde, among others. With the support of the British Embassy, she had her first solo exhibition Roads to Mosul in 2018 at the Oxo Tower in London and in Baghdad to raise money for the reconstruction of Mosul. She has participated in several group exhibitions and in 2015 she self-published her first photo book No Need For Tears, I'm Fine. Simultaneously with the exhibition premiere of her project Leave and Let Us Go at Foam 3h, Howland is publishing her second photo book of the same name (GOST Books).

Thank you! Your submission has been received!
Oops! Something went wrong while submitting the form.
Foam
Amsterdam
Netherlands
September 17, 2021
|
December 5, 2021
Website
Back to Events