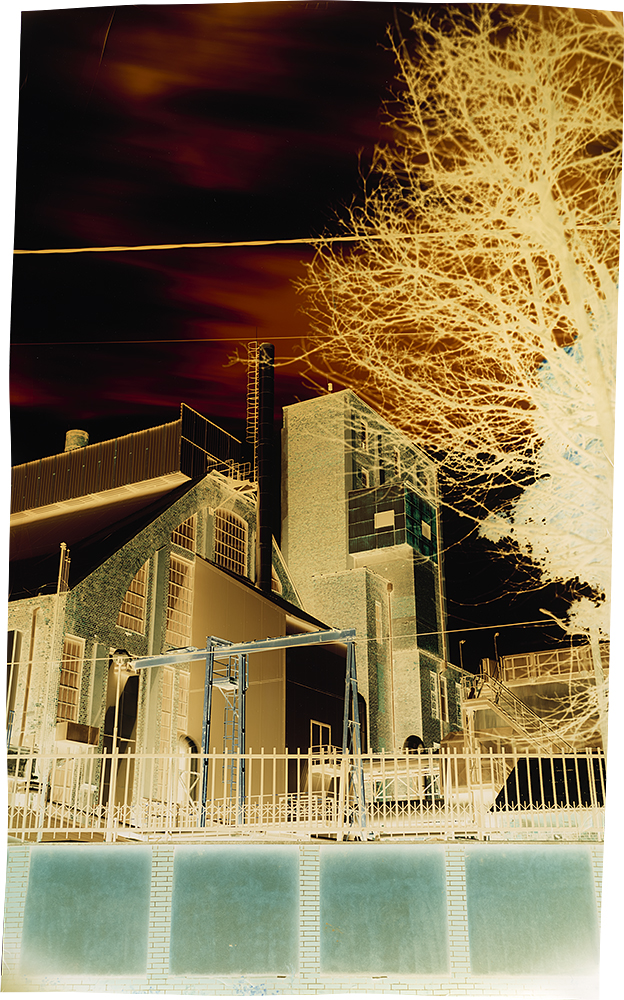 Galerie Miranda is very proud to present the exhibition La Poussière des anges bySan Francisco-based artist John Chiara (b. 1971), the artist’s second solo exhibition at the gallery and the first European exhibition of this new body of work.

In 2019, John Chiara was artist in residence at the Budapest Art Factory residence in Hungary, where hespent time photographing Angyalföld, the city neighborhood whose name translates into English as ‘AngelDust’, into French as ‘la Poussière des anges’. The negative photographic images he created there capture the city’s particular urban mix of history and modernity, with residential and industrial architecture of different periods punctuated by advertising billboards, electrical cables but also many trees. In a poetic echo of the district name ‘angel dust’, the city’s bright blue skies become in their negative incarnation a fiery orange-black, creating a nocturnal, dreamlike landscape inhabited by ghostly forms.

John Chiara is a landscape photographer whose art is grounded in the physical process of the medium. “The subject of my work is photography itself,” says Chiara. “...(and) its manifestation through its means.” Chiara’s giant cameras, which he designs and builds himself, are transported to locations on a flatbed trailer to produce one-of-a-kind large-scale prints. The design of the cameras allows the artist to simultaneously shoot and perform his darkroom work while images are recorded directly onto oversized photosensitive paper. The camera’s very large size and 18th century technology force part of his process beyond his control and,through the barrel lens, images are projected directly onto the scroll of photographic paper fixed inside the camera ‘chamber’. During exposure, Chiara manually burns, dodges and filters the light entering through the lens, working to change the temperature of light and spectrum of color as if in the darkroom.

Chiara uses careful observation, intuition, and chance to capture landscapes that evoke a personal narrative or visual memory of place:

“Photography has a long and complicated relationship with memory, which seems to always be in flux. Memories are unbound, with divergent edges. You have to move around in them to get to points of clarity. ... The psychological weight of memory burns the visual experience into the mind. As time passes, the tie to what the memory was originally linked to can loosen, but the visual image remains.”

The artist often chooses deliberately nondescript places to photograph, in urban, rural or semi-rural places,seeking what he calls “in-between spaces...the type of places you would normally walk past without paying much attention”. Given the time-consuming and labor-intensive nature of his photography, John Chiara Chooses to work in one place for extended periods of time in order to thoroughly get to know its different light and pre visualize the possibilities of what the final image will be, “I respond to the qualities of the light and the way it envelops the landscape - the way the light is captured and held by the paper. I leave room for the noise from the photographic process itself to complete the work.”

Chiara works mainly in San Francisco but has also had residencies or exhibition projects in Baltimore, Los Angeles, Clarksdale (MS), New York, Budapest (Hungary) and in 2020, at the Fundaziun Nairs (Switzerland).His California work, started in 2004 and published in 2017 by Aperture, included a first series of experiments with negative images and color, taken around Los Angeles and San Francisco. In 2018, John Chiara Undertook a complete project of negative images, capturing the dramatic and varied architecture of the city of New York.

As the image is received onto negative paper, light and shadow are reversed, as are the colors, creating a surreal vision of architectural juxtapositions in an unexpected palette. In the Angyalföld work, it seems that“All that is solid melts into air”1 : Chiara’s lacey, translucent trees and glassy buildings against a permanent night sky are a fitting tribute to the shifting history of this country still emerging from communist rule, and currently a populist battleground between tradition and modernity.

Thank you! Your submission has been received!
Oops! Something went wrong while submitting the form.
Galerie Miranda
Paris
France
November 6, 2020
|
February 2, 2021
Website
Back to Events