AUTOGRAPH
By clicking “Accept All Cookies”, you agree to the storing of cookies on your device to enhance site navigation, analyze site usage, and assist in our marketing efforts. View our Privacy Policy for more information.
PreferencesDenyAccept 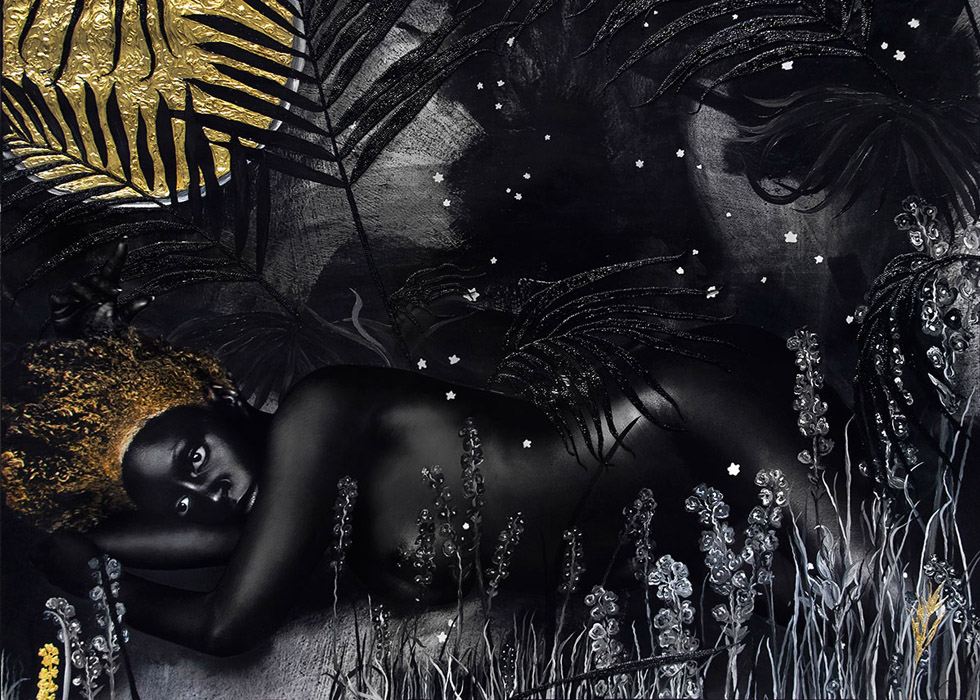 Her photography, painting and sculptural installations are infused with cultural histories of the global African diaspora and preoccupied with multifaceted notions of blackness: as colour, as material and as socio-political consciousness. To Viktor, black is the proverbial materia prima: the source, the dark matter that birthed everything.

This is the British-Liberian artist’s first major solo exhibition in the UK, with more than 60 works on display in two galleries, many seen for the first time.
‍

Viktor’s large works on paper and canvas draw on a variety of artistic traditions and visual influences, from European portraiture, classical mythology and astronomy, to ancient Egyptian and African symbolism. The works in the first gallery are exclusively black and gold.

Viktor’s Dark Continent series dominates the space: its solitary female figure in a monochromatic landscape is illuminated by gilded solar and lunar symbols. The figure is the artist’s own form, her body shrouded in deep, matt black paint, her hair golden; at times contemplative and elusive, at other times provocative and alluring. These works represent an imaginary riposte to imperial narratives of empire and expansion, and the nineteenth-century myth of Africa as the ‘dark continent’.

Viktor often deploys her body in her conceptual art practice, the sole performer in a meticulously crafted cosmology. Combining photography, performance, painting and sculpture with ancient gilding techniques, she creates intricate, densely layered surfaces characterised by her ritualistic use of 24-karat gold leaf. For Viktor, gold is both substance and symbol, a conduit to spiritual transcendence.

In the centre of the gallery, The Black Ark invites visitors to move through a site-specific installation of large-scale latticed panels of carved wood, an architectural structure inspired by the nets of Liberian fisherman and mashrabiyas. Exploring notions of ‘race’, history and ownership, the installation obscures some artworks while highlighting others, making them in the artist’s words ‘at once visible and obfuscated’. The darkened, tropical foliage of the Dark Continent series reappears here as sculptures (Black Botanica), liberated from the confines of the painted, still image.

Constellations IX foregrounds the artist’s interest in the coded languages of abstraction. In this elaborately gilded canvas, a maze of signs and intricate imagery alludes to subliminal, universal modes of communication beyond the restrictive boundaries of language, evoking more visceral forms of expression. In three variations of Materia Prima, the mother work that inspired the Dark Continent series, Viktor appears as a commanding pan-cultural deity, emanating an aura of power, authority and regality.

The second gallery is painted in deep ultramarine blue, emulating the ‘Blue Room’ in the artist’s studio. A meditative space is built within the gallery featuring Syzygy, Viktor’s first figurative canvas reflecting the aesthetic vernacular the artist has developed over the past four years. Also on view are three works from A Haven. A Hell. A Dream Deferred. These works reinterpret the Libyan Sybil, a prophetess from antiquity invoked by eighteenth-century abolitionists as a mythical oracle who foresaw the trans-Atlantic slave trade.

The series explores the extraordinary story of the founding of Liberia to examine fraught narratives of migration, colonialism and oppression. The works brought together in Some Are Born To Endless Night —Dark Matter constitute a bold reclamation of creative agency, and historical and transcultural reimagining. The exhibition reflects the artist and curator’ shared desire to create an all-immersive, symbiotic environment, in which to engage viewers and provide a transformative experience.

"At the core of Lina Iris Viktor’s distinctive practice are complex, cultural narratives and potent mediations on blackness and being: every single one of Viktor’s sumptuous works is layered with profound provocations on history and culture, fuelled by her astute interest in etymology, astrophysics and remedial recovery. In a productive tension between aesthetics and politics, history is creatively reimagined through an emphasis on the circularity of time, and an affirmative excavation of our collective pasts." - Renée Mussai, Curator

Thank you! Your submission has been received!
Oops! Something went wrong while submitting the form.
AUTOGRAPH
London
United Kingdom
September 23, 2019
|
January 25, 2020
Website
Back to Events