Cité de la Musique - Philharmonie de Paris
By clicking “Accept All Cookies”, you agree to the storing of cookies on your device to enhance site navigation, analyze site usage, and assist in our marketing efforts. View our Privacy Policy for more information.
PreferencesDenyAccept 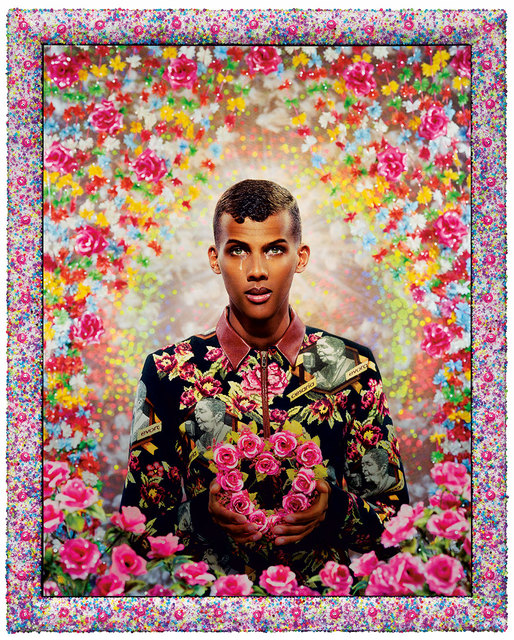 Designed in close collaboration with Pierre & Gilles, the exhibition explores their relationship to music and its codes and symbols. The accompanying playlist composed by the artists echoes each painting, like a giant jukebox, as visitors discover never-before-released documents and installations of souvenirs and other relics from their illusionists’ studio, offering new insight into their factory of idols.

Since 1976, the duo Pierre & Gilles have developed their singular work, a hybrid form between painting and photography. Pierre, the photographer, was born in 1950 in Roche-sur-Yon and Gilles, the painter, in 1953 in Le Havre.

From their meeting emerged a precise and original method: they first have their models (strangers, friends or celebrities) pose for them in sophisticated sets they create in their studio. Once the photograph has been shot and printed, the long task of painting begins, one of the key principles being that each piece is a one-off creation, complete with a frame designed by the artists. They have been represented by Galerie Templon since 2012, and their work has been shown around the world. Presenting 110 works and two new installations created by the artists, this milestone event at Philharmonie de Paris is their first monographic exhibition on the theme of music.

Pierre & Gilles present these rare works dating from the late 1970s to the 1980s, shown here together for the first time, like a giant kaleidoscope. Representing a medley of the period’s music production—light, pop, disco, indie rock, chanson—this portrait gallery illustrates their distinctive style: photographs meticulously painted by hand, often using blocks of citrusy colours, giving their images an almost unreal, ‘pop’ quality. Sometimes created as commissions, these pieces have been used as the covers for albums and maxi singles. Some, such as Lio’s Les brunes ne comptent pas pour des prunes(1986), Mikado’s Naufrage en hiver (1985) and Indochine’s Tes yeux noirs (1986), remain indelibly associated with the image of the musicians they portray.

Unlike the photo-paintings of Pierre & Gilles—which fix a photographic instant on film and then embellish it under the brush, as if to counter the passing of time—music is a fleeting sensory experience. And yet, it endures in our memory, living on after it has been heard, and thus becoming part of the collective memory. In the way they depict their subjects, Pierre & Gilles constantly play with these dimensions, presenting the musicians often allegorically and with an air of melancholy. Popularity is laced with intimacy. A photo becomes something sublime. What emerges is a portrait-in-song of France, an idyllic vision, as if the reality were enchanted by music.

In 1978, with the disco scene in full swing, Fabrice Emaer opened the Parisian club Le Palace on Rue du Faubourg Montmartre. With its inaugural concert by Grace Jones and decor by Gérard Garouste, Le Palace launched a new era of legendary concerts and sumptuous parties, quickly becoming the epicentre of Paris nightlife. It drew not only throngs of young partygoers but celebrities and major figures in fashion and film, including Mick Jagger, Andy Warhol, Serge Gainsbourg, Roland Barthes and Yves Saint Laurent.

Pierre & Gilles and their circle were among the regulars, and many of the friends they made there would become models for their work. Le Palace was also the cradle of gay culture in Paris and ultimately closed its doors in 1983, against the backdrop of the growing AIDS epidemic. Pierre & Gilles present works inspired by these wild “Palace years”—a time of youth and insouciance, but also one of vibrant new musical and artistic interplay that resonated with and nourished their artistic vision.

Designed as an altar, this installation is inspired by the decor of the artists’ studio. In the centre, clips created by the duo play on the television set, a testament to the explosion of music video production in the 1980s, when non-stop music channels like MTV revolutionised the genre. With jubilation, the artists have amassed autographs and figurines as sorts of relics or ex-votos, creating a true-fake musical cabinet of curiosities, characteristic of their imagination and aesthetic.

Christianity haunts the oeuvre of Pierre & Gilles from their earliest works. Steeped in Catholic culture from childhood and great admirers of classical painting, Pierre & Gilles also share a fascination with the naive beauty of pious imagery. Representing biblical figures in their work was thus a natural development, and many musicians have been portrayed as a saint, each recognisable in their attributes.

Whether real or based on fantasy, the celebrity of the singers is effaced by the power of the icon. Each model becomes an ‘idol’ in the true sense of the word. Each painting brings a modern twist to the codes of representing the sacred, seeking its place in the long lineage of Western religious art. Gathered here in the form of chapels, these works appear as objects of worship and interrogate the popular expression of faith and the universality of the Christian message.

In this new installation, created specially for the exhibition, Pierre et Gilles have imagined the fictional bedroom of a Sylvie Vartan fan. Both a sanctuary and a refuge, this deserted room we cannot enter appears untouched by the passing of time, covered in posters, souvenirs, promotional and collector items, and pieces from the artists’ own drawings and personal notebooks. With humour and nostalgia, Pierre & Gilles offer a visual ballad through the cult following for a woman who, with husband and collaborator Johnny Hallyday, would become one of the most emblematic teen idols in 1960s France.

From their familiarity with Christian iconography, Pierre & Gilles drew deep curiosity about all forms of religious representations. Their first trips to Morocco and India made a deep impression on them. In India, where they have returned multiple times, they discovered Bollywood cinema, the omnipresence of the divinities, and hand-painted pictures in the windows of small photo shops. They were fascinated with the colourful artificiality in these images, both sophisticated and direct, which they instinctively strive for in their artistic practice.

For this last section, Pierre & Gilles played with the stereotypes associated with different music genres. We discover, on the one hand, a heaven of love and desire, and on the other, their playful and brightly coloured vision of hell.

Each of these characters is imbued with ambiguity, as if good and evil were intrinsically interconnected. Pierre Lapointe is shown as a trapper in a postcardesque landscape, his hands covered in blood. The universe of Pierre & Gilles is firmly non-Manicheistic: nimbly skipping from one register to another and disrupting visual and social norms, their works echo the transgressive power of music.

Milan Garcin is an art historian and curator, and a PhD student at Université Paris-Nanterre and Ecole du Louvre specialising on the work of Francis Bacon. He studies the hidden links in and between images, the ways in which artists reclaim the history of art, and the epistemology of his discipline, from the twentieth-century avant-gardes to today. He has curated a number of exhibitions, including working with Jean-Hubert Martin on the Carambolages exhibition (RMN Grand Palais, 2016). His curating work is ongoing with multiple museums in France and around the world.

Thank you! Your submission has been received!
Oops! Something went wrong while submitting the form.
Cité de la Musique - Philharmonie de Paris
Paris
France
November 19, 2019
|
February 23, 2020
Website
Back to Events