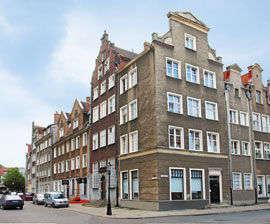 Originally established by the Gdansk Artists' Association as the G.N. Gallery in 1977, the Gallery was later renamed the Gdansk Gallery of Photography, and has been a Division of the National Museum in Gdansk since 1995.
The Gallery specializes in preserving Polish and foreign artistic photographs, documental photographs of Gdansk and its environs, particularly those dating from 1945-56, and photographs from the easternmost territories of the pre-war Poland (the Kresy). The Gallery boasts large collections of pictures of Gdansk by W. Gruszkowski, S. Kaczorowski, E. Kresak, J. Opalski, H. Radowicz, and S. Hueckle, as well as 120 smaller collections by other photographers. It also preserves the S. F. Fleury's archive of 400 photographs taken in the Kresy. Of note are also two series: The Return to Civilization (devoted to the infrastructure and the so-called small architecture of West-European towns) and The Gymnastic Society.
The Gallery mounts temporary exhibitions both at its premises and outside, as well as runs the School of Artistic Photography of an open university status.

The Beirut Center of Photography

Essen
,
Germany
Museums
Next
Back to Resources