Artistic landscapes of the American West in a documentary style 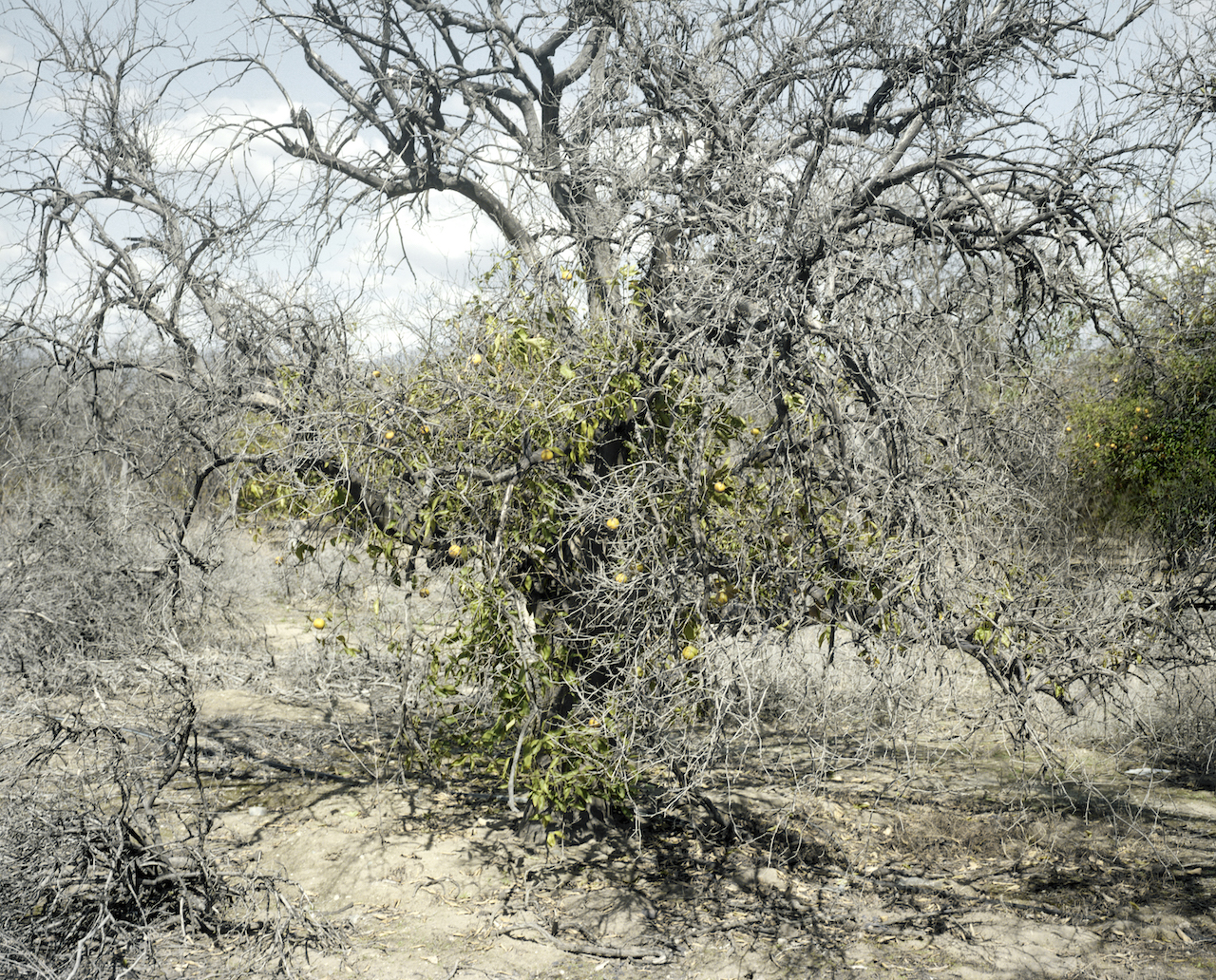 The photos of the series Westward: The Course of the Empire, 1995-2008, show the routes of abandoned railroads. The compositions are treated in a sober style, while the subject is neither majestic nor romantic. The tracks show human activity cleaving through natural spheres. Mark Ruwedel is quite clear on the subject matter of his landscapes. "All my landscape work is human. There is no natural landscape. The idea of landscape is a human construction. When we speak about landscape, we speak about a design; it is a way of understanding a piece of land. All my work has to do with the relationship of human histories."
‍

In his project, Pictures of Hell, most photographs do not show signs of human activity. The only human activity was the naming of the place. "Naming has a relationship with imperialism and colonization. When people conquer a land, the first thing they do is rename it and redraw the maps. I photographed the natural sites because of their names. Those pictures are always seen with the place name. I mounted the pictures on board and printed the name on the board."

His projects are never pre-planned. They are always the result of seemingly casual and coincidental encounters with the subjects. "The Desert Houses were close to the road I drove on to go to another project. I had an artist residency in Joshua Tree National Park in 2003. It was not very interesting to photograph in the park because it is very maintained. When I saw those abandoned houses outside the park, I decided that someday, I would delve into this topic. And soon, I became obsessed with it. For me, it is still a landscape project because it is about where that place is. Not just the building. Collectively they form an arc around Los Angeles. The series Desert Houses is about the myth of the frontier and the relationship between city and country and being away from the law and social norms. There are probably many reasons why they are abandoned. I was interested in the mystery of why they were abandoned. I didn't want to know why; I preferred to question it. There is an undertone of menace in the picture. There is also a semiotic for the idea of failure, the uninhabitability of the desert and the difference between promise and reality, which characterised the continent's history."
‍

I was interested in the mystery of why they were abandoned. I didn't want to know why; I preferred to question it.

Maybe the most epic project of Ruwedel is his Los Angeles: Landscapes of Four Ecologies, which he started in 2015 and on which he is still working, which will last for many years to come. "This project feels like Atget's Paris, on which he worked continually and never ended. Initially, I made a plan for a one-year project funded by the Guggenheim fellowship, which I received in 2014. I identified four types of landscapes of the greater Los Angeles area."

The Four Ecologies is divided into rivers, coastal areas, hills and canyons, and the borders of the deserts. We see photographs of mountains, rocks, and dry plains. Altogether, the project is a growing survey of the vast area with very different natural landscapes, documentary in style, geological in character, but in the end, personal and subjective in approach. "When I began, I thought of the epic landscapes with the big camera, but now I am interested in little details. I don't want to repeat known cliches. I am looking for surprises and things that speak about changing landscapes. The orchards, for example, will be bulldozed away to make place for the warehouses of Amazon. It will disappear faster than I can photograph it. The goal is to publish it ultimately in a book. I am now building the archive from which I can produce a publication."

Artists are engaged with metaphors.

Ruwedel's photographs of LA Fires 2017-2020 were shortlisted for the Prix Pictet "Fire" award in 2021. The subseries shows barren black bushes and trunks on even blacker soil as witnesses of natural disasters. As the Prix Pictet is for documentary projects about sustainability, you might ask whether parts of Ruwedel's work can be seen as a warning for disasters. The photographer denies any photojournalistic connotation of his work. "I don't think of myself as a reporter. I do think of myself as an artist. And artists are engaged with metaphors. Fires have always been here; it is a part of the ecology, but they keep getting bigger and more frequent. The relationship of natural and human forces is central to my thinking of all my landscape work. The contradiction and paradoxes. The pictures suggest a possible future." This part of his extensive body of work shows the narrative of the American landscape, which comprises the natural and human parts. "I think the land itself is a stage for human endeavour, and at the same time, it has its own agency", Ruwedel explains.
‍

The work of Mark Ruwedel can be positioned in the tradition of the New Topographics, the group of photographers who broke with the classic tradition of Ansel Adams. "I studied painting, not photography, so I didn't have to work through Ansel Adams. I used his work when I was teaching as the most exemplary practitioner of a position that I reject in my work. I think his work is extremely fictional. He hides the human relationship with the land. And his pictures are not realistic."

In painting, I was schooled in minimalism and post-minimalism.

Ruwedel feels the most related to the work of Robert Adams and Lewis Baltz. "The new Topographics adopted a new style: degree zero. There is not such a thing as no style, but I am attracted to the idea of not privileging something in your composition over other things.” In a lesser way, he feels connected to Stephen Shore. "I have admired his pictures. He took his photos all over the continent in a road trip setting, making his work closer to Robert Frank. Whereas Robert Adams and Lewis Baltz focused on certain areas." The formal aspect of the desert attracted Ruwedel to start his landscapes. "In painting, I was schooled in minimalism and post-minimalism with the work of Brice Marden and Robert Smithson. That prepared me for photographing the desert."
‍

The photographs of Mark Ruwedel are direct and sober and do not display overt effects with dramatic light or dynamic composition. "I do not like to make pictures that look 'clever'. I don't lay down and look up the with the camera. For the series Westward, I made all the pictures with the camera on the same heights and with the same lens. The differences in the pictures have to do with the place, not with the photos themselves. I am not trying to privilege my authorship over photography itself."

His pictures are mainly black and white gelatine silver analogue prints, with recent exceptions in colour. "I use film, but now I have the colour film scanned. The colour prints are inkjet prints. I really enjoy that because I found the colour analogue process quite difficult and limited, and the analogue colour paper was plastic. Now there are many beautiful papers to choose from. I use both 4x5 inch and 6x7cm cameras. Recently I have been using the 6x7 more. It is much more flexible, and it is lighter to carry. The 4x5 inch I use when I need to correct perspective. I use slightly wide-angle lenses because it feels natural to me."

Mark Ruwedel (1954, Bethlehem, PA.) is an artist who has been photographing American deserts and other remote locations for over 25 years, pursuing epic-scaled projects on railroad construction, Pre-Columbian sites, the landscapes of nuclear weapons, and more recently, failed attempts to live in the harsh environment of the desert. With an affinity for stark, barren landscapes that are otherwise uninhabited, Ruwedel found solace in the desert as it soon became his primary field of inquiry to explore subtle perceptions about the historical versus contemporary in landscape photography.