Foam
By clicking “Accept All Cookies”, you agree to the storing of cookies on your device to enhance site navigation, analyze site usage, and assist in our marketing efforts. View our Privacy Policy for more information.
PreferencesDenyAccept 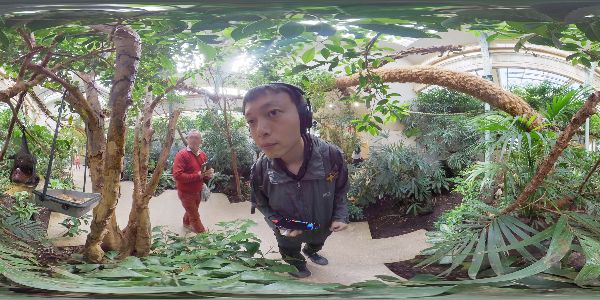 For the first Foam 3h of 2020, the floor has been given to the artist Sheng-Wen Lo (Taiwan, 1987). He will present his most recent project Extendable Ears (2019), in which he exposed himself to ultrasound waves for a month. Ultrasound waves exceed the audible human capacity, but can be heard by animals such as cats and dogs. Lo encourages audiences to discuss the relationship between humans and animals, by using 360ophotographs, videos and photographic scans of dream diaries he kept during his experience.

Extendable Ears is yet another project in the artist’s oeuvre that focuses on animals in contemporary societies after Down (2017-2018) and MELK(2016-2017). In Extendable Ears, Lo investigates the subjectiveness of “noise.” Animals like cats, dogs, bats and insects all have a different experience of sound and are capable of hearing ultrasound waves. Although these sounds exceed the human audible range, this does not mean humans do not produce these sounds all the same. In order to tackle the human-centric experience of sound, Lo created a wearable device that enabled him to hear ultrasound waves as most pets do. In the duration of a month, he wore the device, day and night (two weeks in Taiwan and two weeks in the Netherlands) which subsequently led to surprising results. For example, he started having bizarre dreams during this period.

From his childhood on, Lo has been fascinated by the relationship between animals and contemporary societies. In Lo’s eyes, human-animal relationships reflect people’s values, attitudes and collective memories toward their surroundings. The starting point of his projects therefore always lies at the daily experiences in a consumer society. Mass production and industrialisation in the Anthropocene era have eased people’s lives, with as an unfortunate consequence, has distanced humans from the animals they exploit. Lo wants to question this status quo and creates experiences that encourage audiences to challenge it as well. In Extendable Ears, not the results of the experiment but rather the active consideration of how other beings experience daily life, is key.

SHENG-WEN LO
Sheng-Wen Lo (Taiwan, 1987) is currently an artist-in-residence at Rijksakademie in Amsterdam. He obtained a MA in photography at the Academy for Art and Design St Joost in the Netherlands. He completed an MSc in Computer Science from the Computer Music Lab at National Taiwan University. Lo is creative director of Lightbox, a public photo library and a centre of contemporary photography at Taipei. He was a nominee of the Foam Paul Huf Award (2019) and Prix Pictet Photography Prize (2019), and a fellowship recipient of De Nederlandsche Bank and Prins Bernhard Cultuurfonds/ Prince Claus Fund (2019). His recent works were shown in EYE Filmmuseum, World Press Photo, BredaPhoto, LhGWR and Fotofestival Naarden in The Netherlands.

This exhibition is made possible with support of the Van Bijlevelt Foundation.

Thank you! Your submission has been received!
Oops! Something went wrong while submitting the form.
Foam
Amsterdam
Netherlands
February 21, 2020
|
April 5, 2020
Website
Back to Events