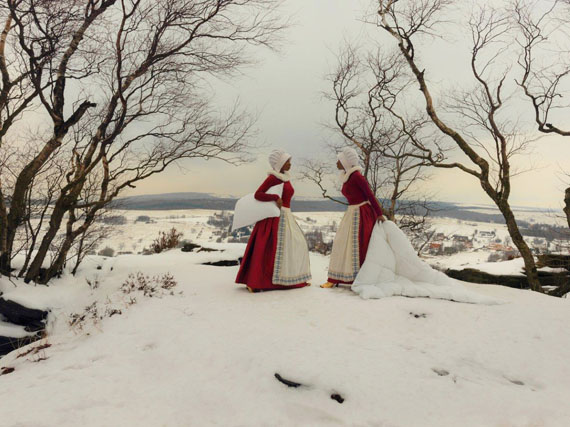 Katerina Belkina (1974, born in Russia, living and working in Berlin) is a visual artist who through her photographical series has sought for the path back to the deepest essential layers of the human identity and has acquired international fame. Not in the least by the prestigious awards she has won: in 2015 she received the International Lucas Cranach Award and in 2016 she became the winner of the International Hasselblad Masters Award in the category "Art" which led to a participation in a parallel program at the Venice Biennial this year.

In her newest series "Dream Walkers. Imagery of Change" the artist focused herself on the old mythology and uses the art of storytelling from the fairy tales of the European continent to ask herself and the viewer existential questions. The universal myth lived through personally, diving into the motivational depth of the heroin (SnowWhite, Frau Holle, Sleeping Beauty and many others) and at the same time surging to the awareness of the archetype, Katerina Belkina is able to concentrate herself on the (sometimes invisible) magical momentum on the eve of transformation or transition to the next mental level by which the artist achieved to create mesmerizing monumental compositions that remind of cinematographic stills with the essential equally participant – the landscape. The artists train of thought is deepened with a catalogue.

Thank you! Your submission has been received!
Oops! Something went wrong while submitting the form.
Galerie Lilja Zakirova
Heusden
Netherlands
November 26, 2019
|
December 29, 2019
Website
Back to Events