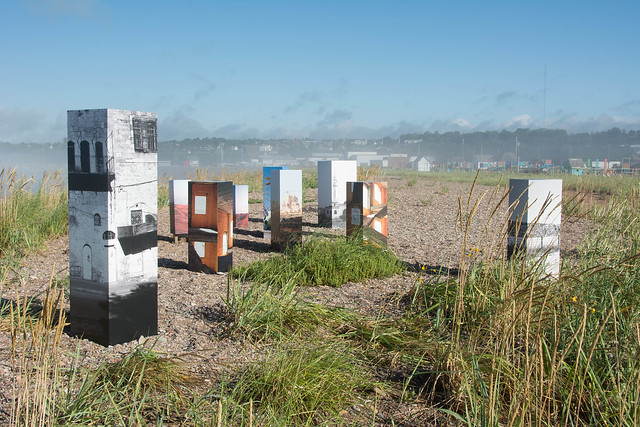 Mission: An annual summertime event, Rencontres introduces the public to contemporary photographic creation and its topicality through occupation of a particular territory: the Gaspé Peninsula. There it presents a series of exhibitions and installations, public events conceived as a space for reflection and initiation, and a program of artist residencies and of exchanges with festivals in other countries.

In inventing Rencontres it was our duty to break ground and to stand out from other contemporary arts events. To champion photography, its language and its various esthetics, we have put in place an arrangement on over 800 kilometers (500 miles), which comprises up tp 20 locations (indoors and outdoors) in 17 municipalities and national parks. The exhibits and installations that we stage in the open air are integrated into the territory, into the places and the buildings. We take part in the identity of the territory while presenting a unique way of visiting it.

The concept of Rencontres resides in the interdependence of the artists and our territory, in the mutual encounter of the population and the artists, but also in the interaction among the works, the territory and the public. Each of these different players thus participates in the process of creation that we aim to foster.

Our vision: To introduce people to contemporary creation, its language, its codes and its various esthetics by occupying our territory: the Gaspé.

Our commitment: To champion the artist’s work, to increase its visibility and to promote the furthering of the discipline. Audience development and networking are at the heart of our actions.

The Rencontres exhibits and installations are situated in about 20 locations spread out in 17 municipalities or national parks in the Gaspé, stretching over 800 kilometers (500 miles). Located in eastern Québec, this exceptional maritime region was ranked one of the 20 best destinations in the world to visit in 2011 by National Geographic magazine.

Riga
,
Latvia
Festivals
Next
Back to Resources