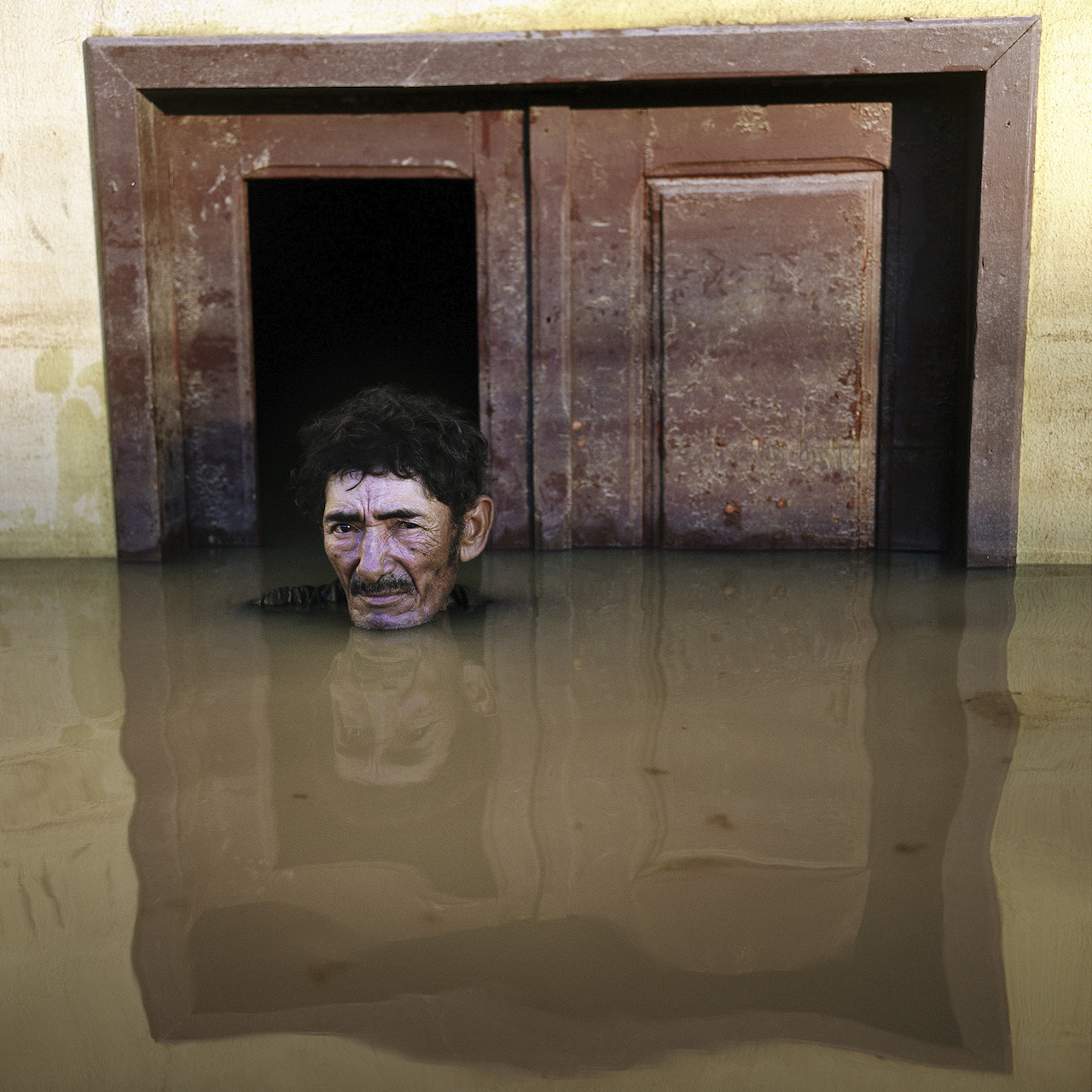 Standing in front of a door in Rio Branco, Brazil is a man called João Pereira de Araújo. He is submerged up to his neck; his expression being a curious mixture of surrender to fate and unfathomable sorrow. A woman called Jenni Bruce stands powerful, but heavily affected in the middle of the skeleton of her burned house in Upper Brogo, Australia. The iconic photographs were made by South African photographer Gideon Mendel, who combines documentary photography, visual art and activism in his ongoing commitment to socio-political and environmental topics.
‍

Gideon Mendel grew up in the same neighbourhood as the late photographer David Goldblatt and went to school with his children, often taken there by David in his car. When Gideon became involved in photography, the famous neighbour appeared quite critical. "He wasn't gentle, but I learned a huge amount from him and from seeing him work and from his dedication."

After studying African economic history and psychology, Mendel started his career in The Star newspaper in Johannesburg. "The Star was an ambivalent newspaper, liberal and conservative. A special black edition, The Star Africa was sold in the townships. I photographed everything, from dog shows to politics. Together with a journalist, I covered political events and got them in the newspaper." After The Star, he worked for AFP, Agence France Press, wiring news photos to France and later moved to the UK and became a freelance photographer.

Being a child of refugees for the holocaust, Gideon Mendel felt the need to address social-political issues such as apartheid and, correlated to it, HIV/AIDS. He made extensive series responding to HIV, starting with The Ward in London, and later covering Africa in his series Framing Aids, A Broken landscape and An Evolving Response. With his work, Mendel won the W. Eugene Smith Memorial Fund in 1996. "I had some years where I was very involved in that kind of struggle. And my work became much more activist. I became a part of the story."

For the project Drowning World, Mendel applied a remarkable and original approach. Every time a region was flooded, he would ask the residents to pose before their downed houses and doors or even inside. This concept yielded a stunning series of confronting portraits that grab the viewer by the throat. If you look at the photos, you feel there is no way of bending around global warming and its devastating results. Gideon Mendel explains that the challenge was not to convince the affected persons to pose, but simply to be there in time and find the right people. "There were many different circumstances. For example, when I was photographing in Brazil in 2015, the water had been above the roofs. And when I got there, it was receding. So, there were many people in their homes because they were using the water as it was going down to clean the walls. But on other occasions, it was a matter of making complex arrangements. There's a woman called Shirley Armitage, who I photographed at her home in Somerset. Someone at the pub told me her house was flooded and he gave me a phone number. We had boats to take us to a house that was very deep underwater. It took me a day to plan the trip. In Nigeria in 2012, the inhabitants of the flooded area were displaced in a camp where I met them. They would take me back to their homes, walking through the water, which was a precarious journey. I've been to 19 different floods, and for every flood, I had a different strategy."
‍

I've been to 19 different floods, and for every flood, I had a different strategy.

The idea to start Drowning World came naturally, as a caring father, thinking about his children's future. "I did the mental exercise of imagining the world when they were my age, researching what the world would be in 2050. And so, I began to think a lot more about climate change. I researched the way climate change was being imaged. At that point, if you were looking at climate change, you saw polar bears and glaciers. I felt there was a lack of human presence. I wanted to make something that confronted the audience. It coincided with a period when I began working with a 6x6 Rolleiflex camera, experimenting with portraiture."
‍

Gideon Mendel photographed the affected people, making the project more human and political because people depend on political decisions about climate. But he sees his work also in a global sense. "As I went along with the project, it became evident that it shouldn't be just kind of black or brown people far away. It needed to contain also people from wealthy Western countries. I photographed a man in Houston in 2017 who lived in a multimillion-dollar house. It still has a huge impact on his life."
‍

The follow up on the submerged portraits is the not less dramatic project Burning World, about the increase of wildfires around the world. Instead of being on the spot during the tragic moments, Mendel captures the aftermath of the burning flames. Since 2020 he flew to Australia, California, Greece and Canada to document people before their destroyed homes. Here again, the empathic portrait and not the sensational flames ask the viewers' attention. Mendel on his approach: "I wanted to look more at the impacts the traces left on people and landscapes. Visually, it was much more of a challenge than Drowning World. A burnt home is a visually very chaotic environment. It's very hard to make a portrait there. I had to make extremely precise compositions. Generally, I would use my time to put up the tripod and create the frame. After that, I would focus on the emotion of the person I portrayed. It's a traumatic place, and I don't want to have them there while you're working on your compositions."
‍

His shots have a wider angle than the drowned portraits because Mendel wanted to show more of the impacted environment. However, it does not make the portraits less emotional because the facial expression still emanates from the image. An example is the photo of the Greek Orthodox priest Father Ioannis Siaflekis before the burned Agion Taxiarchon Church on Evia Island. "The priest spoke a lot about the sadness on the island. The forest, source of the pine resin used for the production of retsina, was completely burned."
‍

My work is aesthetic, but also disconcerting.

Mendel just returned from Greece, expanding his work on the island, photographing the burned olive trees. He photographed the same spot in different seasons. "One of my big tasks was to show how the landscape has changed. I have to avoid my pictures becoming merely aesthetical. My work is aesthetic, but also disconcerting. It's quite hard for people to process that. I get a bit nervous about defining myself as an artist because, in the art world, you produce commodities to sell to the 1%. On the other hand, I also embrace it because my work is funded through the arts. And by the art context, you gain credibility."
‍

Activism and art
Does his activist's work turn Gideon Mendel away from traditional documentary photography? "I don't like to pigeonhole myself. People often ask: are you an activist or an artist? Are you a documentary photographer? I think the way to answer the question is to see where the work has a life. And if you draw a triangle at the three points of the triangle, the work has had a long and continues to have a very long and strong presence in the media world. It has been published in National Geographic, frequently in The Guardian, and many other locations. My work continues to have a place in the world of media. But also, it is being used by activists. And it has been shown in many photo museums, galleries and photo festivals. But also, in a way, it has become art."

Mendel is not optimistic about the political response to the climate crisis but sees light spots in several movements. "We live in a moment when there are many populist governments around the world who are doing their best to undermine any kind of climate change. We need global governance and global response, but instead, the world is more and more fractured. So, I can't say I feel hopeful about political prospects. Still, I do feel hopeful about some of the culture change that you see and kind of activism and the climate awareness growing amongst so many people and youth."

We need global governance and global response, but instead, the world is more and more fractured.

Gideon Mendel (1959) was born in Johannesburg, South-Africa. He began photographing in the 1980s, during the final years of apartheid. In the early 1990s he moved to the UK and embarked on his longitudinal project on the impact of HIV and AIDS. Since 2007 Mendel has been working on Drowning World, an art and advocacy project about flooding, his personal response to our climate crisis. Amongst many accolades Mendel has won the Eugene Smith Award for Humanistic Photography, the Amnesty International Media Award, the Greenpeace Photo Award and he has been shortlisted for the Prix Pictet in 2015 (Disorder) and 2019 (Hope).

In 2022 he was finalist in the Sony World Photography Award in the section of Environment Professional competition.