In this series Meditations, Alice Zilberberg creates animal montages as an expression of self-therapy. 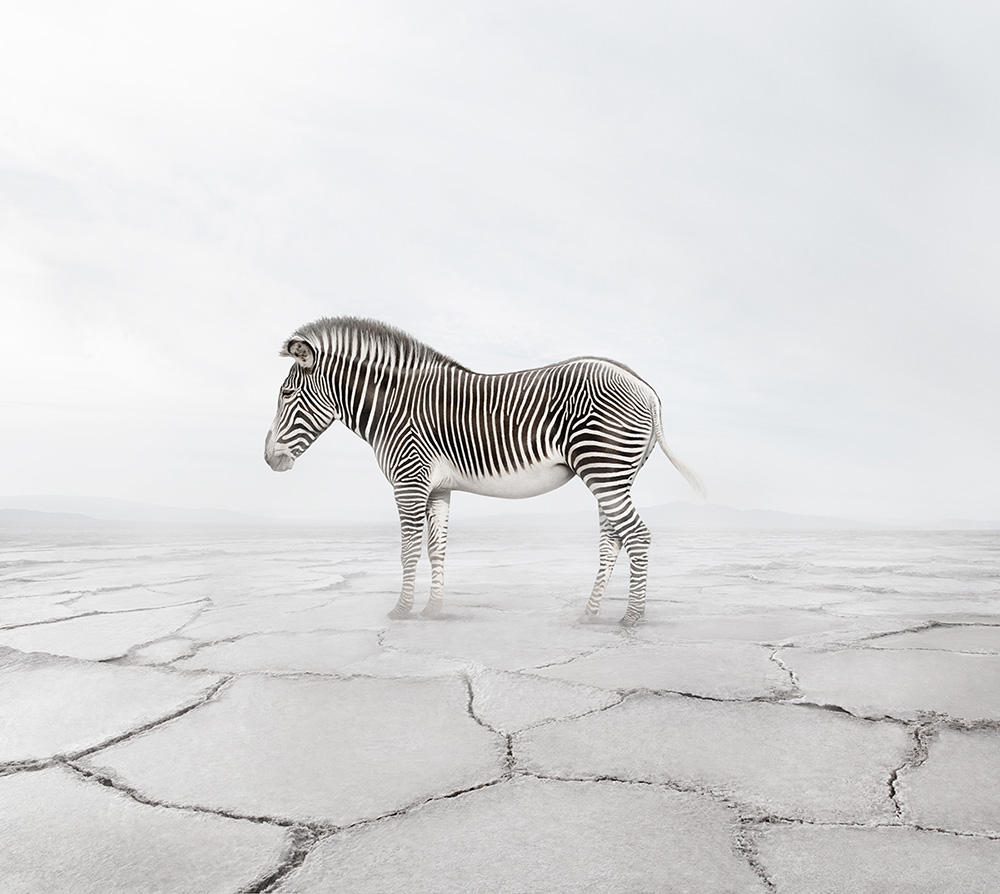 In this series Meditations, Alice Zilberberg creates animal montages as an expression of self-therapy. As an urbanite, functioning day-to-day in a fast-paced, built environment can be emotionally unsettling. She regrounds herself in the sense of calm issued by these animals. These creatures reinstate a presence, a tranquillity, and a grander perspective. The works are an amalgam of many photographs from different locations around the world, put together seamlessly by the artist in post-production. Their minimal aesthetic is metaphorical of striving for simplicity. Rather than ruminating on the past, or hypothesizing the future, Zilberberg’s works invite a meditative state, encouraging the viewer to stay still and find happiness at the moment.
‍

I’ve been craving getting wildlife into my work for a long time. Thematically, it is a continuation of ideas I’ve had in mind for years and explored in my previous work. I always look to nature to restore a sense of grounding and calmness, and I find this in wildlife as well. With my repertoire, I explore themes about the human condition, namely personal identity, emotional intelligence, relationships, and emotionality. I find mindfulness in these creatures and vast landscapes. I also genuinely care about nature and wildlife conservation, and I want to draw more attention to conservation efforts. I hope to bring these works into people’s lives and on collector’s walls. It will encourage a conversation about conservation, and how it is not only good for the environment but for us emotionally as well.

There is a lot of labour to the images. Works take months to complete, with every detail meticulously inspected for perfection. For this project, I shot with natural light, and I use a digital camera. My style includes a lot of digital post-production as well. I travel around the world for each of my backgrounds. I shot on different places, and some environments are a combination of a few places. The animals are photographed separately, and they are sometimes a combination of a few images as well. These elements are merged digitally and combined with ingredients such as image manipulation, toning, colouring, and digital painting. I need to get the best images of the animals and the environments I possibly can, to make sure the angle and lighting are right to be able to combine them.

Some of my favourite artists are Dali and Magritte, and many baroque painters. I look at a lot of contemporary art and photography for inspiration. In my work, I also engage with psychology and philosophy. I am especially interested in self-awareness and emotional intelligence. Some inspiring people for my art are Alain de Button, Yuval Harari, and Esther Perel.

I was born in what was then the Soviet Union and is now called Tallinn, Estonia. We immigrated to Israel when I was two years old, and moved as a family to Toronto when I was eleven years old. My relationship with art is life-long. I used to paint when I was a little kid, and I played around with photo-manipulation when I was very young. When I started experimenting with photography, I saw that I could create images with the details I wanted, which seem real, but simultaneously unreal. I’ve worked this way ever since.

Alice Zilberberg is an internationally acclaimed, award-winning artist, recognized by curators, collectors, and art patrons across the globe. Born in Tallinn, Estonia, and raised in Israel, she currently resides in Toronto, Canada. A graduate of Ryerson University’s Photography program, she began her artistic practice by painting: a verve which remains very much present in her digital works. The winner of numerous prestigious competitions, her accolades include 1st place titles in photography competitions such as the International Photography Awards, the Julia Margaret Cameron Awards, and the Fine Art Photography Awards. In 2013, she was the youngest artist to date to participate in the Waddington’s Art Auction. Her work displayed in galleries across North America, Europe, and Asia; she has been interviewed and featured in publications and platforms such as MTV, Breakfast Television, CBC, and PHOTO+ Magazine in Korea. For over a decade, Zilberberg developed her distinctive technique for creating her digital paintings, where photography is only the beginning of the final artwork.