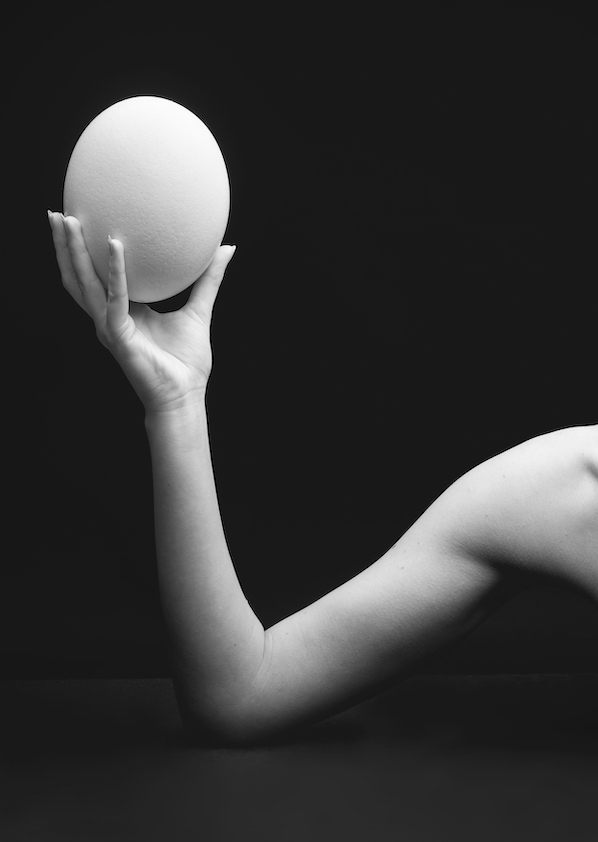 Different Shades of White’ is the latest in Misia-O’s celebrated photographic series, following the critically-acclaimed ‘Different Shades of Yellow’, which was recently awarded the Prix du Jury (Jury Prize) at the Salon des Beaux Arts (SNBA) in Paris.

‍
Beginning with ‘Different Shades of Black’, followed by Yellow and White, the next series will explore different shades of red.  Misia-O’s work focuses on using light to show the colour variations of the single colour and non-colour we attribute to skins so wrongly and so simplistically.
Misia-O’ says of her work: “It’s really challenging stereotypes, but not in a political way, rather in an aesthetic, anthropological and humanist way, and by finding parallels in nature. Ultimately, race does not exist in science, and colours are an actual interpretation of our retinas caused by light frequencies. I am challenging our labelling of 'skin colours" by also showing colours and non-colours are made of many shades and light frequencies.  We accept diversity of nature, but not diversity of skin colour, and I wanted to challenge these prejudices and normalize what makes us human – gender, skin colour. It’s all about the exploration of light – that led me to study quantum physics, because I’m looking at light refraction and frequencies (ADD).”

‍
For the ‘Different Shades of White’ series which will be exhibited at les Rencontres d’Arles, Misia-O’ worked a lot with the hair of the model and the human form that can be found in a shell, with an exploration of bronze and silver leading her to the technique.
‍
Misia-O’ exhibition ‘Different Shades of Yellow’ prints at the Salon des Beaux Arts, which was created in 1861 by an association of independent artists including iconic names such as; Rodin, Delacroix, Manet and Ingres.  In 1891, Puvis de Chavannes, Rodin and Carolus-Duran relocated the "Salon Des Beaux Arts" - which was then held in the luxury headquarters belonging to the Marquis d' Hertford, Boulevard Des Italiens - to the Champ De Mars.
The Salon Des Beaux Arts President Michel King commented on the awarding of the coveted Jury Prize to Misia-O’: “Misia-O’ uses her darkroom to explore the mysterious colours of the world.  For this artist, the obscure mother-light conceals all the symbols.”
‍
"Misia-O' utilise sa chambre noire pour explorer les mystérieuses couleurs du monde. Pour cette artiste, l'obscure mère-lumière recèle tous les symboles." Michel King, Président de la SNBA et grand POM (Peintre Officiel de la Marine)
Misia-O’ will exhibit ‘Different Shades of White’ at les Rencontres d’Arles 2021, a great accolade for any photographer, since Arles is not only recognised globally as the capital of photography in Europe, but is also the official city of culture in France with the official opening of the Fondation Luma this June. Misia-O’s 2017 series ‘Trans-it-I-on’ was exhibited in 2018 in Arles at ‘Les Voies Off’, where the artist was a finalist.  The ‘Trans-it-I-on’ series celebrated the beauty of Transgender men and women, their transitions and becomings.

Les Rencontres d’Arles (formerly called Rencontres internationales de la photographie d’Arles) is an annual summer photography festival founded in 1970 by Arles photographer Lucien Clergue, writer Michel Tournier and historian Jean-Maurice Rouquette. Since the inaugural Les Rencontres d’Arles, there have been more than 40 exhibitions at various heritage sites in Arles, and since its launch in 1970, the festival has become a major influence in disseminating the best of world photography and playing the role of a springboard for photographic and contemporary creative talents.
In 2019, the festival welcomed more than 145,000 visitors. After a hiatus in 2020 due to the pandemic, les Rencontres is back, and the 2021 edition will continue to revisit the history of the medium of photography and its players, whilst making new history and unearthing new talents such as Misia-O’, who first exhibited in Arles in 2017.
The theme of Arles 2021 is ‘Summer of Fireflies’, and the exhibition curation responds to the strange and unprecedented times we are living in, born out of a desire for les Rencontres d’Arles to gauge the pulse of the world through the selection of photography on display.
Les Rencontres d’Arles Director Christoph Wiesner says: “Should we invent a new rite of passage for this very peculiar time?  Retouch this blank year in technicolor? The urgency of the present calls for commitment above all—a commitment on the part of Les Rencontres d’Arles to the photographers, artists, curators, partners and institutions with which the festival has forged such strong ties for so many years. Arles in midsummer will be like a constellation of fireflies, made up of a thousand lights illuminating the diversity of regards, polyphony of stories, and symbolizing the survival of hope and consciousness-raising by means of the image.”
The new suite of photographs featured in Misia-O’s ‘Different Shades of White’ series is the result of a year of painstaking research, with the Surrealist aesthetic of the images rooted in the artist’s love of Surrealism, Dadaism and 1930’s Paris, and in particular her admiration for the work of Lee Miller. Miller was romantically involved with Man Ray for a time whilst working with him in his studio in Paris, and reputedly had a major part to play in the development of the solarization technique which Man Ray was given all the credit for. So in a way, Misia-O’s is not only redressing the balance of the male gaze, by depicting the female model from the point of view of the female gaze, but also redressing the balance of important female photographers and artists from history often being relegated to the role of ‘Muse’, such as Lee Miller.
‍

Different Shades of White’ includes several prints made using the solarization technique, as well as portraits taken in silhouette, and combine references to surrealism and iconic photographers of the 30s such as Edward Weston and Bill Brandt, with what Misia-O’ describes as ‘divine architecture’ represented in the form of exquisite natural objects such as shells and ostrich eggs, which she incorporates into her photographs as still life studies juxtaposed with studies of the female form. According to Stephen Skinner, the study of sacred geometry has its roots in the study of nature, and the mathematical principles at work therein.  Many forms observed in nature can be related to geometry; for example, the chambered nautilus grows at a constant rate and so its shell forms a logarithmic spiral to accommodate that growth without changing shape.
Misia-O’ creates conceptual photographs with a pleasing aesthetic, designed to seduce the viewer and then encourage them to explore more deeply than the first impression of the surface. She uses the solarization technique because it’s similar to an X-ray, enabling the viewer to see beyond skin colour to the universal being.
The ‘Different Shades of White’, like the entire series of ‘Different Shades’, encourage us to move away from first impressions, and realise that we are so much more than what’s on the surface. Misia-O’s interest in ‘sacred geometry’ stems from an interest in the human body and ancient architecture, which were a focus of Renaissance artists such as Leonardo da Vinci, whose ‘Vetruvian Man’ incorporated the sacred geometry principles of the human body.
Misia-O’ commented: “When you shoot still life you see ‘Sacred Geometry’, for example in my portrait of a shell, whose natural symmetry is reflected the intricate plait of the model’s hair. My work is concerned with identity, humanity and humanist philosophy, as well as ‘Divine Architecture’ and the beauty of the human form.”
‍